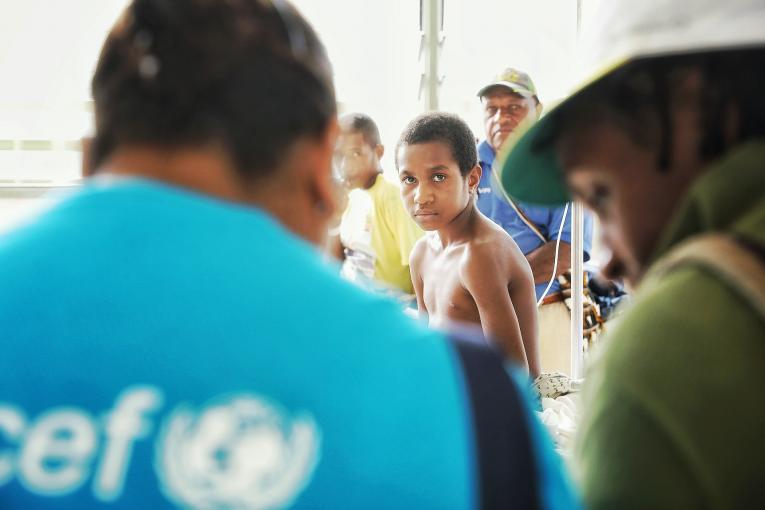 UNICEF/Mepham
Manu Tony, 12, recovers in Mt. Hagen Hospital, Highlands, Papua New Guinea,. During the earthquake Manu was trapped for three hours when a house post fell on his leg during the powerful earthquake.

PORT MORESBY, 28 March 2018 – One month after a series of earthquakes of magnitude 5-7.5 hit four Highlands provinces of Papua New Guinea, children are still in shock and suffering significant trauma and stress which could have negative consequences to their long-term well-being, UNICEF said today.

“Psychological damage among children should not be overlooked. It can have a negative impact on children’s brain development, mental health and overall wellbeing in the long-run.”

Children who have suffered from trauma have an increased risk of delayed development, mental health disorders, depression, anxiety, self-harm and suicide, she added.

Before the earthquakes, children in PNG were already at high risk of violence and abuse. Available data indicate that girls and boys in PNG experience some of the highest rates of violence in Asia-Pacific region. About 75 per cent of children report experiences of physical abuse and about 80 per cent experience emotional abuse during their lifetime. A recent Médecins Sans Frontières report showed that 12,000 cases of family and sexual violence are treated each year in Tari Family Support Centre located in Hela Province, where the worst earthquake damage occurred.

The PNG Government estimates 270,000 people are in need of urgent assistance, including 125,000 children. Of those children, about 15-20 per cent require psychological support, according to the World Health Organization.

Thanks to the support from UNICEF Australia, the UN Central Emergency Response Fund, and the Government of Australia, UNICEF PNG is currently setting up 26 child-friendly spaces (CFS) to provide psychosocial support services for more than 14,000 children in the severely-affected areas of Hela and Southern Highland provinces. The CFS are safe places where children can receive psychosocial support to regain a sense of normalcy, play and learn life skills including good hygiene practice. In addition, outreach teams will be dispatched to affected communities to organize recreation activities such as music and sports, as well as identify children in need of psychosocial support.

To date, UNICEF has already delivered 23 metric tons of relief supplies to Papua New Guinea, including tents and tarpaulins, water purification tablets, hygiene kits and learning kits. Some 12,000 packets of therapeutic food and vaccines to protect 31,700 children against the increasing risk of disease outbreak and malnutrition have also been delivered.

UNICEF needs $14.6 million to help children and families affected by the earthquake over the next year. This will focus on providing clean water, sanitation and hygiene in temporary shelters, psycho-social support in safe places, vaccinations and malnutrition treatment and support for children to return to school.

UNICEF Australia is appealing for donations to help provide lifesaving support for children in Papua New Guinea. Donations can be made at https://www.unicef.org.au/appeals/png-children-s-earthquake-appeal