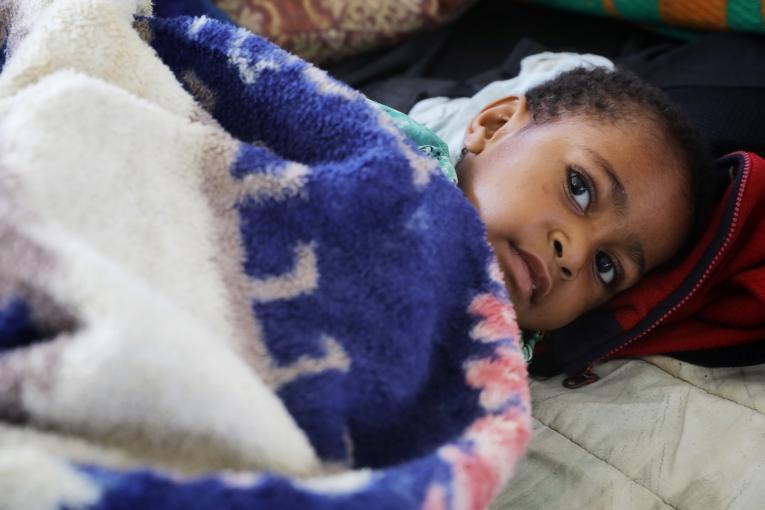 UNICEF/UN0184899/Mepham
Rihanna Sam (4 years old) is from Mendi and is suffereing an infection in her femur after her leg was broken during the earthquake.

PORT MORESBY, 9 April 2018 – UNICEF and the World Health Organization (WHO) have cautioned about the high potential of waterborne and vaccine-preventable disease outbreaks in earthquake-affected areas of Papua New Guinea.

Major concerns include watery diarrhoea due to water contamination from landslides, poor sanitation and personal hygiene management; and the vaccine-preventable diseases due to already low immunization coverage in the Highlands region. According to the National Department of Health (NDOH), about 70-80 per cent of children in the severely-affected provinces are not protected against preventable diseases – with routine measles coverage in Southern Highlands and Hela provinces in 2016 just 18.2 per cent and 27.6 per cent, respectively.

”At this stage of the emergency response, it is critical to restore the delivery of basic health services to the affected communities, such as the immunization of children, said Dr Luo Dapeng, WHO Representative in PNG. “We will continue to work closely with the NDOH, Provincial Health Authorities and partners to respond to these risks and to prevent a secondary emergency arising from disease outbreaks”.

Karen Allen, UNICEF Representative for PNG, said that the current situation of children and families is a perfect situation for the emergence of disease outbreaks.

“We are really worried because a majority of children in the affected areas already have low immunity,” said Allen. “Now, as they are living in the crowded shelters with poor-hygiene conditions, inadequate clean water and little knowledge to protect themselves, children are becoming much more vulnerable to diseases, including vaccine-preventable and water-borne diseases.”

UNICEF and WHO are supporting the Government to conduct a measles and rubella immunization campaign for children under five years old in the earthquake-hit areas in order to curb the risk of potential outbreaks. In addition, basic medical supplies and essential medicines for maternal and newborn health will be provided to ensure pregnant women and newborns have medical support for pregnancy related care. Just a few days after the earthquakes, UNICEF has distributed vaccines to the affected communities to protect some 31,700 children against measles and rubella, pertussis, pneumonia and tuberculosis.

In the Southern Highlands, the Provincial Health Authority (PHA) with support from WHO sent nine mobile teams by helicopter to vaccinate children in remote settlements referred to as care centers. WHO has also supported the two provinces of Hela and Southern Highlands in establishing the Health Emergency Operation Center and the installation of surveillance systems to detect unusual disease reports. Local health authorities and community members have been trained to rapidly respond to disease outbreaks.

UNICEF and WHO are also stepping up the effort to improve water and sanitation system and hygiene practice in the affected areas. Hygiene kits and water purification tablets have been distributed to affected communities, while emergency pit latrines and rain water collection tanks are being built.  At temporary shelters and child-friendly spaces, children also learn to protect themselves through hygiene-promotion activities.

UNICEF Australia is appealing for donations to help provide lifesaving support for children in Papua New Guinea. Donations can be made at https://www.unicef.org.au/appeals/png-children-s-earthquake-appeal