AMMAN/SANA’A, 28 May 2018 – Nearly 1.5 million of the most vulnerable families in Yemen – an estimated 9 million people - have received emergency cash transfers from the Emergency Cash Transfer Project implemented by UNICEF and funded and supported by the World Bank’s International Development Association.

The joint UNICEF-World Bank emergency cash transfer project was launched in mid-2017 and this week concluded its second payment to the most vulnerable Yemenis. A third payment is being planned for August 2018.

“These emergency cash transfers contribute to avert the risk of famine and allow targeted families to buy food and medicine for their children, among them many malnourished. It is also pivotal in avoiding families’ negative coping measures like child labor and early marriage, both on the increase in war-torn Yemen”, said Geert Cappelaere, UNICEF Regional Director.

The cash transfers come as a lifeline for nearly one third of the people in Yemen. The country’s population has been suffering from years of conflict which has led to the threat of famine and outbreaks of diphtheria, cholera and acute watery diarrhea. The intensification of the conflict in the last three years, has killed and injured nearly 6,000 children and made the country poorer. Families have been pushed to extreme measures just to survive, including child labour, early marriage or recruitment into the fighting to sustain their families.

Umm Mohammed, a mother of four, was unable to cover her family’s most basic needs and was forced to take her younger son out of school: “We are going through harsh times, living on one meal a day. But with the cash we received, I managed to fix my sewing machine and purchase fabrics and have customers. The cash I received made a big difference in my family’s life,” Umm Mohammed said.

Mohammed, the 12-year- old son, says: “When my mother asked me to stop going to school, I went to my room and cried.  I was first in my class.  We were so poor and unable to even feed ourselves.  Now I am back in school.  I am so proud of my mother who struggled a lot but never gave up on us.”

“The Emergency Cash Transfer Project is changing the lives of millions of Yemenis who have no other source of income during this difficult time,” said Dr. Asad Alam, World Bank Country Director for Yemen, Egypt, and Djibouti. “By helping provide basic income support, the programme is helping to keep children in school, providing the means to purchase food and medicines, and helping Yemenis to be ready to rebuild their lives once peace is restored.”

• The initiative was launched in August 2017.

• Across Yemen, an estimated 17 million people, 60 per cent of the total population, are now food insecure, with a staggering 8.4 million at risk of starvation - a worrying increase of 24 per cent since April 2017.

• Malnutrition threatens the lives of millions of children, as Yemen’s health and education systems are on the verge of collapse. 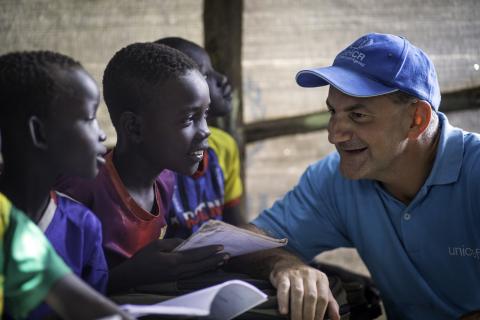