Cyclone season and threat of violence loom over 720,000 Rohingya children in Myanmar and Bangladesh – UNICEF 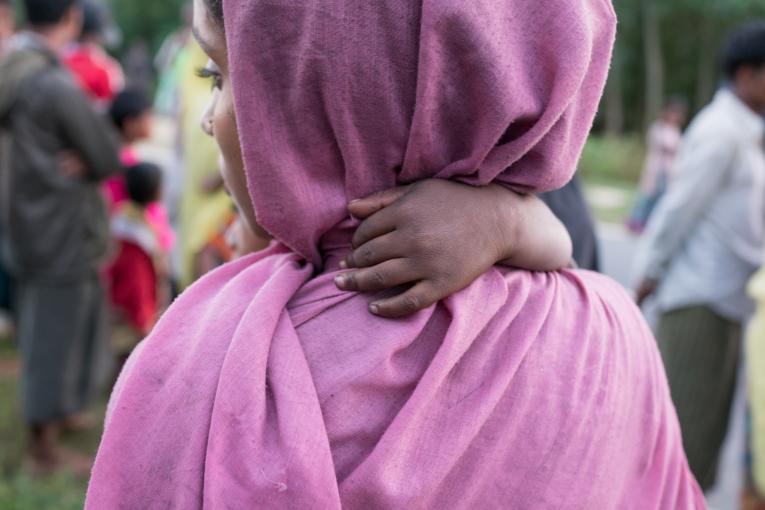 UNICEF/UN0156977/Bindra
A Rohingya refugee baby holds on to its mother after reaching the shores of Bangladesh after crossing by boat from Myanmar, in Cox's Bazar district, Bangladesh, November 2017.

GENEVA/NEW YORK, 23 February 2018 – Urgent efforts are needed to help more than 720,000 Rohingya children who are threatened either by the approaching cyclone season in Bangladesh or by ongoing violence and denial of their basic rights in Myanmar, UNICEF said today.

In a report* marking six months since the start of the latest exodus of Rohingya refugees into southern Bangladesh, UNICEF says that floods caused by the forthcoming cyclone season are likely to engulf the fragile and insanitary camps where the most of the refugees are living, raising the likelihood of waterborne disease outbreaks and forcing clinics, learning centres and other facilities for children to close.

According to the report, an estimated 185,000 Rohingya children remain in Myanmar’s Rakhine State, fearful of the violence and horror that drove so many of their relatives and neighbours to flee. In Bangladesh, there are estimated to be around 534,000 Rohingya refugee children from last year’s and previous influxes.

“Some 720,000 Rohingya children are essentially trapped – either hemmed in by violence and forced displacement inside Myanmar or stranded in overcrowded camps in Bangladesh because they can’t return home,” said Manuel Fontaine, UNICEF Director of Emergency Programmes.

“This is a crisis without a quick fix that could take years to resolve unless there is a concerted effort to address its root causes.”

Chased from their homes and communities, the Rohingya are a people cast adrift, trapped in limbo and deprived of their basic rights, while facing fresh threats to their health and lives, the report states.

UNICEF calls on the Myanmar Government to end the violence, and to address what it terms a crisis of human rights in Rakhine State, referring to restrictions on Rohingya people’s freedom of movement, extremely limited access to health care, education and livelihoods, and consequent dependence on humanitarian support.

The report says that the recognition of the Rohingya people’s basic rights would create conditions necessary for the refugees to return to their former homes in Myanmar.

“People won’t go home unless they are guaranteed safety and security, unless they have citizenship, unless they can send their children to school and have a chance of a future,” said Fontaine.

Since August 2017, lack of access to many parts of Rakhine State has severely restricted the work of UNICEF and other humanitarian agencies. UNICEF says that immediate and unimpeded access to all children in the state is imperative, as well as longer-term efforts to address intercommunal tension and promote social cohesion.

In Bangladesh, aid efforts led and overseen by the Government have averted disaster, while 79,000 Rohingya have been accommodated by local communities. UNICEF has been part of a huge international response, supporting the digging of water borewells, the installation of thousands of latrines and immunization campaigns to protect children against cholera, measles and other diseases.

*LIVES IN LIMBO: No End in Sight to the threats facing Rohingya children

Photo and video assets for the report can be found on this link.