Record heatwaves, floods and droughts ‘a stark vision of the world we are creating for future generations’ 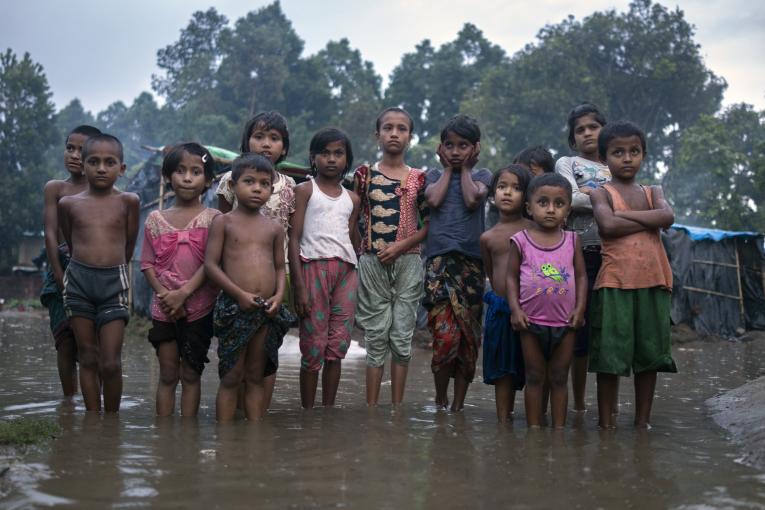 NEW YORK, 31 August 2018 – The large number of extreme weather events around the world, including floods in southern India, wildfires in the western United States and heatwaves across much of the northern hemisphere, are putting children in immediate danger, as well as jeopardizing their futures, UNICEF warned today.

“In any crisis, children are among the most vulnerable, and the extreme weather events we are seeing around the world are no exception,” said Ted Chaiban, UNICEF Director of Programmes. “Over the past few months, we have seen a stark vision of the world we are creating for future generations. “As more extreme weather events increase the number of emergencies and humanitarian crises, it is children who will pay the highest price,” he added.

June and July saw record high temperatures set across much of the northern hemisphere, with the World Meteorological Organization (WMO) reporting the first six months of the year have made it the hottest La Niña year on record.

From North America to East Asia, and from the Arctic Circle to Europe, large parts of the globe have experienced heatwaves, droughts, wildfires, floods, and landslides resulting in injury and loss of life, environmental damage and widespread loss to livelihoods including harvest losses. Countries in Central America and the Caribbean are preparing for the peak of the hurricane season while still trying to recover from the devastating 2017 season, which was the costliest on record.

While individual weather events cannot specifically be attributed to climate change, the increasing frequency and severity of extreme weather -- including recent high temperatures, intense rains and slow-moving weather fronts -- are in line with predictions of how human activities are affecting the global climate.

Such events can cause death and devastation, and can also contribute to the increased spread of major killers of children, such as malnutrition, malaria and diarrhoea. And as these extreme climate events increase in frequency and magnitude, the risks to children will likely outpace global capacity to mitigate them as well as to provide humanitarian response.

“As the world experiences a steady rise in climate-driven extreme weather events, it is children’s lives and futures that will be the most disrupted,” added Chaiban. “Therefore, it’s vital that Governments and the international community take concrete steps to safeguard children’s future and their rights. The worst impacts of climate change are not inevitable, but the time for action is now.”

Numerous studies have documented that human-induced climate change has increased the frequency and severity of heatwaves across the globe. Children are especially at risk as they adjust more slowly than adults to changes in environmental heat, and are more susceptible to heat-related health risks, with children under 12 months old particularly vulnerable. Infants and small children are more likely to die or suffer from heatstroke because they are unable to regulate their body temperature and control their surrounding environment. Extreme heat conditions also increase the need for safe and reliable drinking water, while in many cases rendering such water more scarce through evaporation.

Droughts have multiple effects on poor families and communities. Crops fail, livestock die and income drops, leading to food insecurity for the poor as well as rising food prices globally. Water becomes scarce and the lack of food and water, as well as inequitable access to these necessities, can result in migration and social disorder, with children among the most vulnerable to the consequences of these effects.

UNICEF’s agenda for action on climate change include:

In September, UNICEF together with UN partners - FAO, WFP, IFAD and WHO - will launch the State of Food Security and Nutrition in the World, which this year will analyse how climate extremes are threatening to erode and reverse gains made in ending hunger. 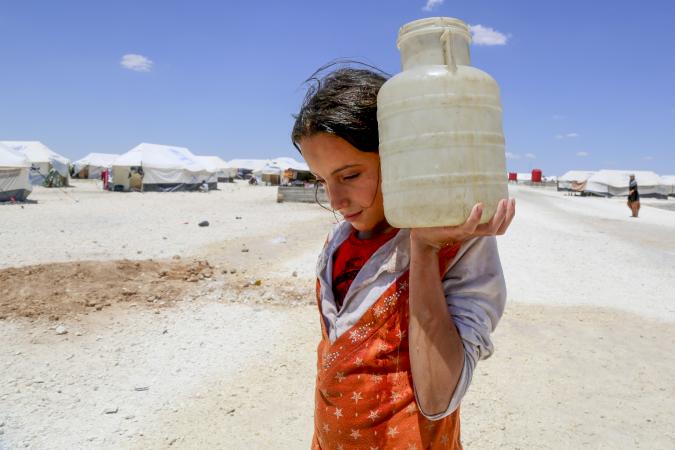 On 3 June 2017 in the makeshift camp at Ain Issa, 50 km north of the Raqqa in the Syrian Arab Republic, Horriya, 12, carries a jerrycan of water.