Geneva Palais briefing note on the situation of children in Idlib, Afrin and Eastern Ghouta, Syria 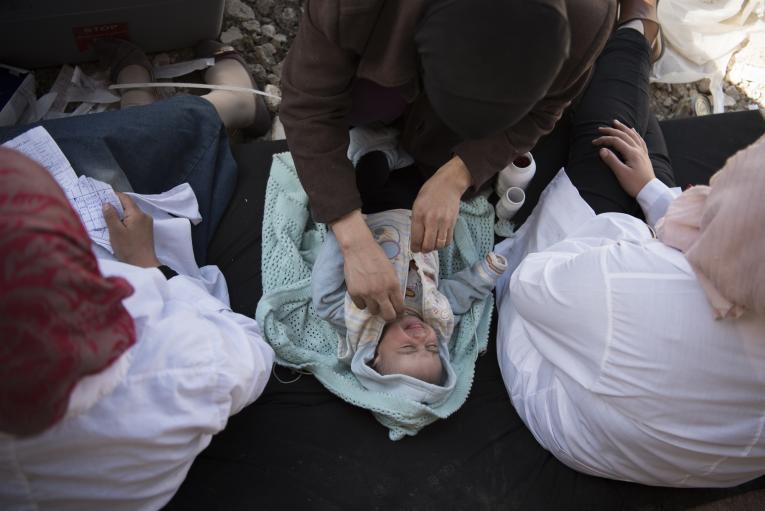 GENEVA, 23 March 2018 - This is a summary of what was said by Marixie Mercado, UNICEF spokesperson in Geneva – to whom quoted text may be attributed – at today's press briefing at the Palais des Nations in Geneva.

Idlib
UNICEF partners report that 17 children were killed earlier this week in Idlib when heavy violence near a UNICEF-supported school forced children to flee to an underground shelter in a nearby building, which then came under attack. Around 1 million children live amid the escalating violence in Idlib. Across Syria, over 300 education facilities have been attacked since the beginning of the conflict.

Eastern Ghouta
As UNICEF gains access to children in areas that have been under siege for the past five years, the scale of the suffering and the trauma they have endured becomes clearer – as does the need for lifesaving support.

On March 20, UNICEF reached some 7,000 people, about half of them children, in Nashabieh, Kafr Batna, Hamourieh and Saqba, with support for the first time in almost five years. We were able to bring water, health and nutrition supplies, and in Nashabieh, we have set up mobile health teams and continue to truck water. Before, we had extremely limited access to these communities as they were part of the besieged East Ghouta enclave, and assistance would come mainly through interagency convoys.

UNICEF staff described children and families in desperate condition, stunned from years of violence and deprivation. Hygiene and sanitation conditions in the overcrowded shelters pose the most urgent risk to children.

UNICEF is working to provide the children who have lived through years of siege with the services and protection they have been without for so long, and to make up for the years of learning they have lost. But even as we are able to reach children in more places, the violence continues just kilometres away.

UNICEF is working to respond to the needs of 200,000 people who have left East Ghouta for the collective shelters, as well as inside East Ghouta, with nutrition and medical supplies, clothing, water and hygiene kits.

Afrin
Around 100,000 people still remain in Afrin district and almost 170,000 have been displaced to Tel Rifat, Nubul and Zahra.

The IDPs in Nubul and Zahra are in collective shelters, mainly schools and mosques. They have minimal access to health services including vaccinations for children – and there is no first aid, surgery or specialised care available. The nearest medical point is Alzahra field hospital, 3 kilometers away, which is not well equipped. Permission is required to get through the checkpoints to Aleppo, which is about 25 kilometers away, and has more medical facilities, and it is unclear how many have made it through. UNICEF has provided the Aleppo Department of Health with health and nutrition supplies to meet the needs of over 25,000 children and mothers from Afrin.

UNICEF and partners are trucking water to all three locations every day, and we have also provided bottled water, water tanks and hygiene kits. The Syrian Arab Red Crescent has been able to reach hundreds of children in Tel Rifat with psychosocial support for the first time, and has also been able to get to several villages around Tel Rifat where there are around 4,000 people completely without access to services.

Nubul collective shelter observations
There are 13 collective shelters including mosques and stables, but displaced families are also staying with friends or renting houses. The displaced describe running in the face of shelling, sleeping in the open, being separated from their families – and now, fear over what the future holds. A man from the local community said they were bringing food and bread  and clothing to the displaced families, but that this could not continue, as the people in the village were not rich themselves.