Otmar is very thirsty. Sitting in the arms of his mother, the one-year-old boy cries out and reaches in the direction of a plastic cup. But, for now, the cup is empty, and his mother can only try to soothe him.

Otmar is very thirsty. Sitting in the arms of his mother, the one-year-old boy cries out and reaches in the direction of a plastic cup. But, for now, the cup is empty, and his mother can only try to soothe him.

The water supply at Pombreal Village, in the remote Southern Highlands of Papua New Guinea, has run dangerously low in the months since the 7.5 magnitude earthquake struck in February.

Landslides have contaminated a nearby creek, and now the entire community, some 600 people, relies on a single 5000-litre water tank.

The rainwater tank replenishes slowly, and the situation has grown desperate. The community must ration the little water they have left, just a quarter of a cup for each child per school session.

Racheal, the boy’s mother, explains how Otmar became sick with diarrhoea after drinking water from the creek. It was the family’s last resort.

“I know it isn’t good for him, but we have no choice. There are no other options,” says Racheal.

More than 85 per cent of Papua New Guinea’s population lives in rural areas like this one.

According to the 2015 WHO/UNICEF Joint Monitoring Programme, 68 per cent of people living in these areas don’t have access to improved water sources, and these numbers have remained virtually stagnant since the joint monitoring programme began in 1990.

Pombreal Village sits in the crest of the mountain, two and a half hours outside of Mendi, accessible only by unsealed roads.

Rachael tends the family’s crops: sugar cane, peanuts, corn, sweet potato, and kaukau. The family might have an income from this bountiful harvest, unfortunately though, at Pombreal Village there aren’t many visitors. The village is too remote and difficult to access.

Theirs isn’t the only family resorting to such desperate measures, and when children get sick, there isn’t much an under-resourced health centre nearby can do to help.

The issue of clean drinking water only compounds other stresses the family of four faces in the wake of this earthquake.

Rachael says that her eldest son, seven-year-old Innocent, seems irrevocably changed — and she fears he may never be the same. He clings to his father every time there is an aftershock, and, if one occurs during school hours, races through the fields to be at home.

However, in the months since the first earthquake, hopes for the future have risen, in the form of a large tent and one amazing woman.

After UNICEF erected the tent as a temporary learning space at Pombreal Primary School, Judy Olpis — who calls herself a “housewife” — volunteered to oversee a diverse learning programme.

Day after day, she teaches 132 school kids. Her curriculum doesn’t just cover “the ABCs” but also teaches kids basic principles of hygiene, such as how to wipe their noses.

In spite of her own problems — the family home needs repairs — she continues to show up.

“I tell them, when there is an earthquake, not to run off in every direction — because they will break my tent!”

Judy explains how when there is an aftershock she will “save” the children in her care, but then modestly corrects herself, instead saying that she will “keep them safe”.

But, in a sense, she has saved the children of Pombreal Village. Without a school programme to at least provide them a sense of routine, the long term mental effects might be far worse.

Judy fears one threat to the wellbeing of her students above all else; the shortage of water.

“The children say to me: ‘Aunty Judy! We want water! We are thirsty!’ A full water tank doesn’t even last us one week — we are really suffering here.”

Judy’s example has begun to inspire others in the community. Maxwell Konop, the Chairman of Pomberal Primary School, is supporting the construction of a new pit latrine toilet, a set of tippy taps for hand washing, and two additional much-needed 5000L water tanks as a personal contribution to improve the school.

Within the month, Maxwell will also begin construction of a permanent building to stand in place of the tent, a new home for the UNICEF Education Programme.

Maxwell says the effectiveness of Judy’s learning programme — parents are supportive, children are engaged — makes this an easy initiative to support.

The new facilities, which will be operational in one month, will provide improved sanitation for the community, and triple its rainwater storage capacity.

It’s a change that will go a long way to sating the thirst of children like Otmar.

Reaching into her backpack, one of my colleagues finds a short term solution, and fills Otmar’s cup, almost to the brim, with water. He hungrily gulps it down, stopping briefly to smile at us, before draining the remaining water. 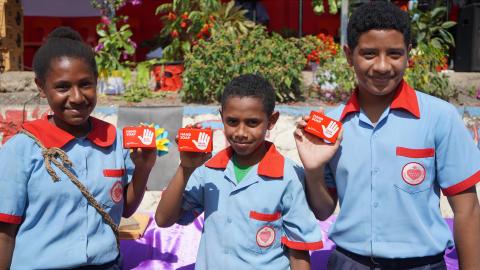 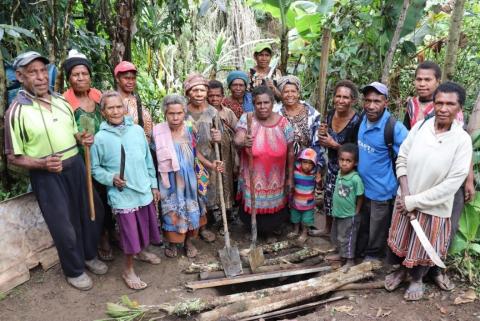 Women lead community to build toilets for every household

Meet the women of Luhox hamlet in Kabiufa village in the Eastern Highlands Province of Papua New Guinea. 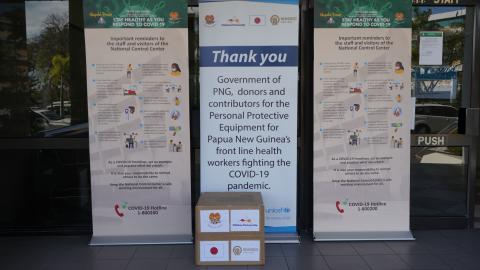 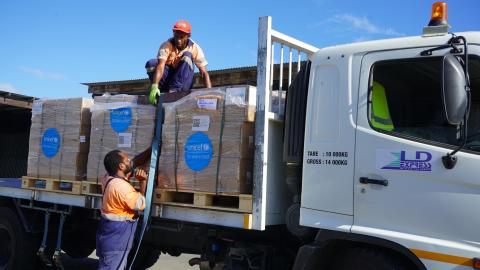