Despite progress, millions of young children still miss out on life-saving immunization

NEW YORK/MANILA, 27 April 2017 – UNICEF procured 2.5 billion doses of vaccines to children in nearly 100 countries in 2016, reaching almost half of the world’s children under the age of five. The figures, released during World Immunization Week, make UNICEF the largest buyer of vaccines for children in the world.

In the Philippines, UNICEF procured $33 million worth of vaccines in 2015 and 2016. The UN children’s agency also dedicated $1.5 million worth of technical assistance and supplies to strengthen immunization in urban poor and conflict areas to reach the most disadvantaged children.

Access to immunization has led to a dramatic decrease in deaths of children under five from vaccine-preventable diseases, and has brought the world closer to eradicating polio. Between 2000 and 2015, under five deaths due to measles declined by 85 per cent and those due to neonatal tetanus by 83 per cent. A proportion of the 47 per cent reduction in pneumonia deaths and 57 per cent reduction in diarrhea deaths in this time is also attributed to vaccines.

Yet an estimated 19.4 million children around the world still miss out on full vaccinations every year. Around two thirds of all unvaccinated children live in conflict-affected countries. Weak health systems, poverty and social inequities also mean that 1 in 5 children under five is still not reached with life-saving vaccines.

The Philippines has achieved a number of successes in immunization. The immunization program has contributed to the reduction in the under-five mortality rates from 58.2 in 1990 to 28 in 2015 (World Bank, 2016). The country has maintained its polio free status since 2000 and will be validated for Maternal Neonatal Tetanus Elimination this year. Increasing government budget has enabled introduction of new vaccines like PCV13, HPV, IPV, Dengue vaccine and Rotavirus in selected areas. In 2018, Japanese Encephalitis vaccine will also be introduced.

Despite these achievements, the Philippines has many opportunities for improving the immunization program.

“In the Philippines, there are still millions of unvaccinated children. Children in conflict areas and children in urban poor communities face hazards including overcrowding, unsafe water, air pollution, inadequate sanitation and garbage collection and lack of access to quality health services including vaccines. We must work together to reach all children everywhere, with a particular focus on the most underserved parts of the population,” UNICEF Philippines Deputy Representative Julia Rees says.

In the Philippine National Demographic Health Survey of 2013, only 68.5 per cent of children 12-23 months were fully immunized, a drop from 79.5 per cent in 2008. The national immunization coverage for all Vaccine Preventable Diseases (VAPD) is decreasing.

In 2015, BCG, DPT 1, DPT3, Polio and MCV2 (Measles containing vaccine 2nd dose) vaccination rates are below 80 per cent, far from the ideal coverage of at least 95 per cent. An estimated 2.3 million children are still unvaccinated for DPT3. The Philippines has been cited by the Strategic Advisory Group of Experts on Immunization of the World Health Organization as the among the top 5 countries in the world together with Nigeria, Pakistan, Indonesia and Congo with the highest number of unimmunized children for DPT3 in 2015. The decrease in coverage for most vaccines over the years has resulted in occurrence of outbreaks of vaccine preventable diseases notably measles, rubella and tetanus. A measles outbreak in 2013 resulted in 3,777 confirmed measles cases affecting mostly the urban poor.

“All children, no matter where they live or what their circumstances are, have the right to survive and thrive, safe from deadly diseases,” said Dr. Robin Nandy, Chief of Immunization at UNICEF. “Since 1990, immunization has been a major reason for the substantial drop in child mortality, but despite this progress, 1.5 million children still die from vaccine preventable diseases every year.”

“In addition to children living in rural communities where access to services is limited, more and more children living in overcrowded cities and slum dwellings are also missing out on vital vaccinations,” said Nandy. “Overcrowding, poverty, poor hygiene and sanitation as well as inadequate nutrition and health care increase the risk of diseases such as pneumonia, diarrhea and measles in these communities; diseases that are easily preventable with vaccines.”

By 2030, an estimated 1 in 4 people will live in urban poor communities, mainly in Africa and Asia, meaning the focus and investment of immunization services must be tailored to the specific needs of these communities and children, UNICEF said.

In the Philippines, UNICEF is helping the government reach all children by advocating to leaders at all levels of government to invest in health care to protect children from diseases.

At the highest level, UNICEF’s health governance experts work with the Department of Health to strengthen routine immunization and improve vaccine procurement processes and distribution systems to prevent stock-outs. As an emergency-prone country, typhoons and earthquakes put the system of keeping vaccines potent and effective at risk. During Typhoon Haiyan in 2013, UNICEF provided vaccines and helped make the cold chain in the affected areas resilient. UNICEF provided solar refrigerators, generators and cold rooms worth an investment of US$ 8 million to reduce costs and help in future emergencies. 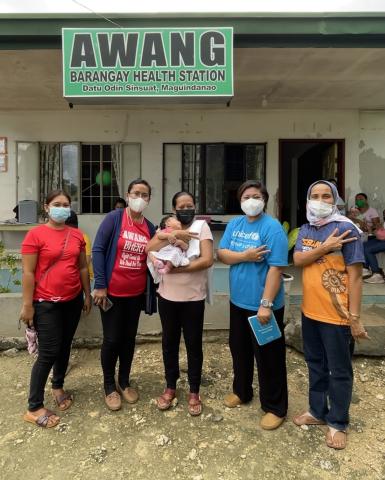 A Mother’s Love: Getting vaccinated to protect her children 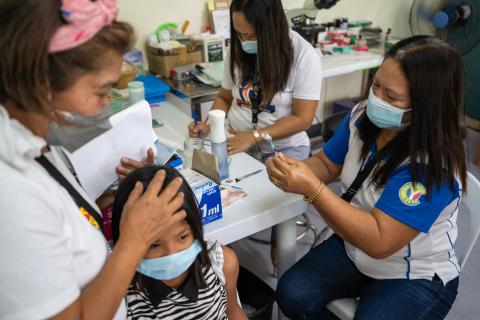 The people behind every vaccinated child in Binangonan 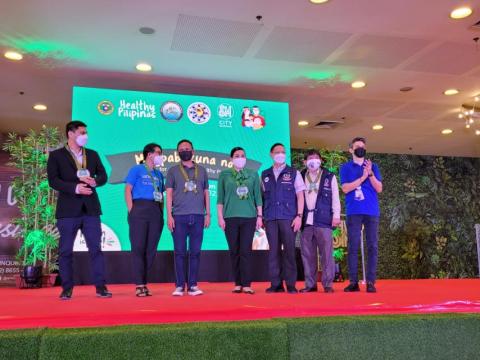