With new classrooms, offices and fences, UNICEF, with support from the German Government, is improving school safety and motivation for teachers and children in Yobe

Every morning, Zainab Ali, head teacher at Dawoyo Primary School, Dawoyo, Yobe State, in north-east Nigeria, takes a lone tour around the brand-new classroom and office block that has sprung up on the school premises. The 50-year-old, who has been at the helm of the school for 12 years, just can’t help herself.

“Of course, I have seen many new school buildings in my lifetime, but this is different,’’ says Ali. “This school was established in 1972, but this is the first time that a head teacher is about to have a separate office where school records can be kept safely.”

Zainab Ali’s enthusiasm is understandable. For much of the school’s existence, academic activities for children have been held in only four functional classrooms, while five teachers and the head teacher have had to share one staff office. But a new building with two classrooms and one office – constructed by UNICEF and the Yobe State Universal Basic Education Board, with funds from the German state development bank, KfW – has changed everything.

Zainab Ali says teachers and children are eager for the official handover ceremony that will allow them to begin using the building.

“Usually, my teachers had to sit outside the office when I had to attend to certain work issues,” she says. The school at one point had eight functional classrooms, but now has just four for 470 children. Attempts by the School-based Management Committee to repair one of the classrooms were foiled when strong winds blew off the roof. Now, the students themselves are debating who will move into the new classrooms.

"The new classrooms have ceiling fans and electricity and we can keep records without the fear of termites destroying them. We are all excited and we thank all the organisations who made this possible."

The excitement is not limited to Dawoyo. In Yobe and Adamawa States, many communities are in a similar state of euphoria over improved and expanded facilities. The improvements follow years in which conflict and a lack of investment led to overcrowded classrooms and threats to school safety.

UNICEF, in partnership with the Universal Basic Education Board in Adamawa and Yobe States, is helping to keep children safe and receive quality education with the construction and rehabilitation of classrooms, staff offices and fences in 160 schools. Learning outcomes improve when children study in a conducive and safe learning environment.

In nearby Azamkura, the sight of a new structure with fresh paint is a constant attraction for children at the Azamkura Primary School. Prior to the construction, the school’s 338 students were forced to learn together in just four classrooms, says Sallah Bulama, head teacher.

“The new classrooms will put an end to overcrowding and learning under the tree for children in this school. That was how we were coping before this project came,” says Bulama. “I wish every classroom in this school was like these new classrooms – we have many parents and children asking to be enrolled because we have a new building. We are grateful for this intervention and we will make sure that it is well utilised.” 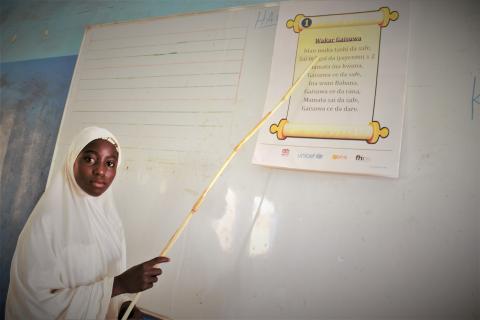 Getting out-of-school children back to classrooms in north-w