Four years after a cholera outbreak claimed 39 lives, including children at the Muna Garage IDP Camp in north-east Nigeria, a family stays disease-free through regular handwashing with soap

Bale Bulama still lives with his family in the same shelter he was allocated when he first arrived at the Muna Garage IDP Camp in Maiduguri, north-east Nigeria in 2016. But unlike then, a medium-size black handwashing station now stands at the entrance of his compound for the use of visitors and family members.

“I personally make sure there is always water and soap in the container,’’ said Bulama, a former farmer displaced from Dikwa. “There is no excuse. You must wash your hands here before and after eating or using the toilet.”

Bulama lost two children - a 13-year-old boy and an 8-year-old girl - to the cholera outbreak that rocked the state in 2017. Across five LGAs that year, there were 5,365 recorded cases of cholera, resulting in 61 deaths. Muna Garage IDP camp was the epicenter, with 1,408 cases and 39 deaths.

“It was the darkest point of my life,” said Bulama. “But what can we do? We have nobody else to blame. We were not keeping necessary hygiene regulations like handwashing. It was very painful, but we thank God that there has not been another outbreak since then. We have learned our lessons.”

Like other families in the camp, Bulama and his family observe good hygiene practices by keeping their environment clean, shunning open defecation, regularly washing their hands with soap, and making sure drinking containers have tight lids.

The 62-year-old says these practices likely kept the camp from a recurrence.

Indeed, the five-year-old camp with over 50,000 residents has been free of water-borne diseases since 2017. Even the September 2021 cholera outbreak, one of the worst in recent times, did not affect any families at the camp.

But grief stalked the camp during the 2017 cholera outbreak. A UNICEF assessment of the causes found that household transmission was the main mode of transmission and spread of the disease, followed by transmission in public places and the contamination of water sources.

To keep children free of water-borne diseases at the camp, UNICEF has partnered with the Centre for Integrated Development and Research (CIDAR) to install handwashing stations and distribute hygiene kits to more than 8,000 households.

Conflict and displacement in north-east Nigeria have worsened existing sanitation and hygiene challenges in the region. Over 75 per cent of water, sanitation and hygiene infrastructure, including more than 200 health facilities, have been destroyed in the 12-year-long conflict. The resulting displacement of farming and fishing communities has further impoverished households in the region, resulting in the loss of disposable income needed to buy basic hygiene necessities like bars of soap, kettles and containers with lids to store water.

Children under 5 years old are particularly at risk of dying from avoidable infections among displaced populations living in overcrowded settings with high rates of open defecation and low rates of handwashing.

In Borno State, only 14 per cent of households have access to soap and handwashing facilities in their premises and just 18 per cent have such access in Yobe State. Worse, 16 per cent of the population in Borno still practice open defecation, while the figure is even higher, at 32 per cent, in Yobe.

UNICEF and its partners are providing an integrated sanitation response to keep children and women safe in IDP camps across the north-east. Efforts include establishing sanitation committees in IDP camps, regularly removing fecal matter, as well as repairing of toilets and latrines through the efforts of WASH committee members in the camps.

But, according to experts, handwashing with soap before and after eating and using the toilet remains one of the most potent defenses against infection, especially in children. To enable more handwashing, UNICEF produced some 699,700 liters of water from nine boreholes and established 25 water collection points around Muna Garage IDP Camp.

Fanne, one of Bulama’s daughters, collects water daily from one of the points, located just 25 metres away from the family’s shelter. The water point has served Bulama’s household and others with clean drinking water for months.

But to reduce the frequency of cholera outbreaks across north-east Nigeria, Mamita Bora Thakkar, UNICEF WASH Manager in Maiduguri, said stakeholders must focus on institutionalizing and internalizing handwashing behaviour among communities and in institutions in the IDP camps and host communities.

“We recognize that change in hand hygiene needs to happen in multiple settings, and requires significant advances in the short, medium and long term through government leadership,” she said. 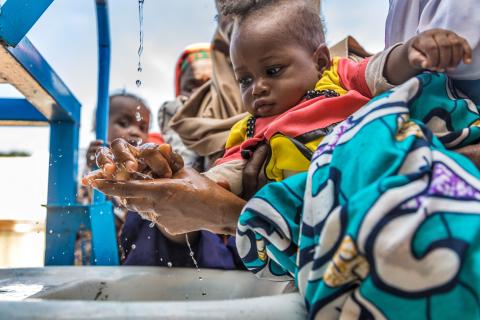 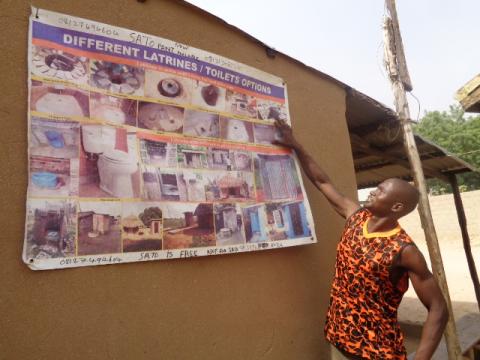