PB-Mère is one of the most cost-effective ways to detect and treat severe malnutrition in the country.

“I never went to school. I don’t know how to read or write,” says Habisatou Alhassane.  A 25 year-old mother of two.  “But I can see the colours on this armband and I can see if my child is malnourished.”

Previously Habisatou would have gone to the health centre on a prescribed day, twice a year, to have her child screened for malnutrition.

“The challenge with our malnutrition screening campaigns was that we weren’t getting the coverage we needed,” explains Boubacar Halirou, an expert in PB-Mère and the head of PB-Mère for International NGO ALIMA, in the Maradi Region.  “Not all the mothers could come at the appointed times, and many children slipped through the cracks.  With PB-Mere, we’re including the mothers, by sharing with them the process of detecting and treating malnutrition.

“One day in December last year, a community worker came and invited me to join the other women in my neighbourhood for a training.  We all gathered under a tree, and learned what malnutrition is, how to detect it, and what do to about it.  Then they gave us our own armband to take home.”

“In the west, it is very common for families to have a thermometer at home,’ explains Helene Schwartz, nutrition specialist with UNICEF in Niger.  “If they feel their child is warm, they can check their temperature, then take them to the doctor.  This is like that.  Most mother’s notice when their child is not well, so now they can check if malnutrition is the cause, themselves, at home.”

PB-Mère is a programme conceived and initiated by ALIMA, a Senegal-based international NGO, in partnership with UNICEF and WFP. PB stands for périmètre brachial, or arm circumference.  And mère is “mother.”

On average annually, 400,000 children under the age of five are admitted to nutritional programmes in Niger. Sixty per cent of these children live in the Maradi and Zinder regions - regions that are also the most productive in agriculture.  Why the disconnect?

“There are many local practices - social norms - that actually put the baby in danger in their first twenty-four months of life,” explains Schwartz.

“For example, because of the heat, many mothers feel they should give their baby water in addition to breast milk.  But this water is often not potable and causes diarrhoea, which can have numerous complications - one of them, malnutrition, which then makes the child extremely vulnerable, possibly leading to death.”

Once the child moves on to eating solid food (after six months of life), there are additional problems. Poor diversity of food means they don’t get adequate nutrients, in quality and quantity.  Millet is the primary grain in the region, and often meals consist of millet porridge alone.

“Many children just don’t get enough to eat in the day,” says Schwartz.  “If their mothers are working in the fields, they may have to skip a meal.  Alternatively, if there is a family meal, the children eat after the adults, and the youngest are beat out by the older kids to the best and most nutrient-rich ingredients, such as meat or vegetables.”

A safe/healthy environment is also a challenge in most of Niger, including the Maradi region. Children are often exposed to poor sanitation and hygiene, causing intestinal inflammation, resulting in a reduced capacity of the small intestine to absorb nutrients.

“And all of this is compounded by the fact that health services are often hard to reach,” says Schwartz, “making screening for malnutrition difficult and inadequate.”

PB-Mère is one of the most cost-effective ways to detect and treat severe malnutrition in the country, working through exponential learning.  In Maradi, the chief district doctor and nutrition focal point are first trained by ALIMA on the PB-Mère approach. Then the chief district doctor or nutritional focal point train at least one person per health centre in the PB-Mère screening technique and Infant and Young Child Feeding (IYCF) practices.  Following on that, health workers then train community volunteers, and finally community volunteers train all women of child-bearing age in the village on these same screening techniques and adequate IYCF practices.

During the first phase, funded significantly by ECHO, and other partners such as USAID Food For Peace, the Governments of Canada,  Spain and Czech Republic, approximately 300 community volunteers and 460,000 women were trained.  Phases two and three will be rolling out in the next six months and will cover the remaining five districts in the region.

“This approach just keeps on giving, because the trained women then share what they’ve learned with their co-wives, and neighbours and sisters,” explains Halirou.

“Our coverage is more than we could have hoped for because it becomes preventive as well, when we add the additional complimentary feeding training and mothers’ support groups,” explains Halirou.  “Our biggest challenge is actually to ensure that medical and nutritional supplies are available in all health centres”.

In Niger, this year has been particularly challenging.  Funding gaps have discontinued the national Ready to Use Therapeutic Food (RUTF, also known as Plumpy’nut) pipeline.

Despite recent efforts, severe acute malnutrition rates and burden remain extremely high in Niger. Management of SAM is a largely unfinished agenda, and this year has been particularly challenging.  There is an apparent and progressive reduction of humanitarian resources for nutrition in Niger. A stronger focus on prevention is key to reversing malnutrition in the country.

PB-Mere is therefore a key intervention  - going hand in hand with the promotion of adequate Infant and Young Child Feeding practices. Outreach and education on best IYCF practices is an integral part of the PB-Mère training and involves IYCF mother--to-mother support groups.  These mother-to-mother support groups are trained to give pregnant women and mothers with children less than two years old counselling on adequate breastfeeding and complementary feeding practices.  This is partnered with assisting with the child’s treatment and development so that they do not fall back into malnutrition.

“This is really a revolutionary approach. PB Mère is a game changer”, says Schwartz.

By the end of the year, than 850,000 women will have been trained on how to use an armband to screen malnutrition, how to check nutritional oedema and will have been sensitized on adequate IYCF practices.

“Now I have the power myself to watch my children’s health very closely,” says Habisatou. 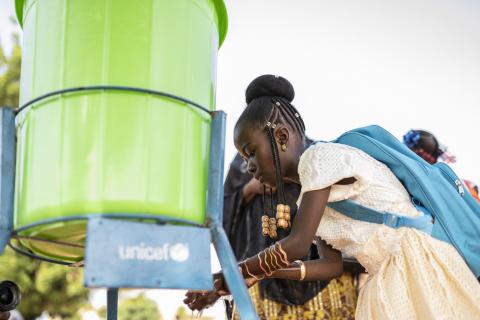 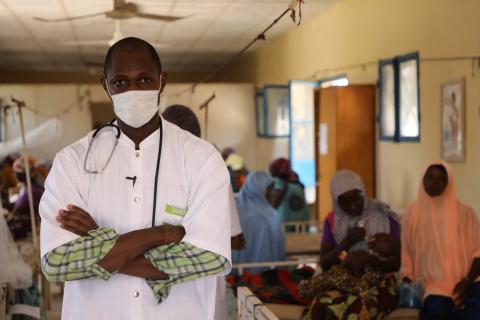 Stronger with Breastmilk Only 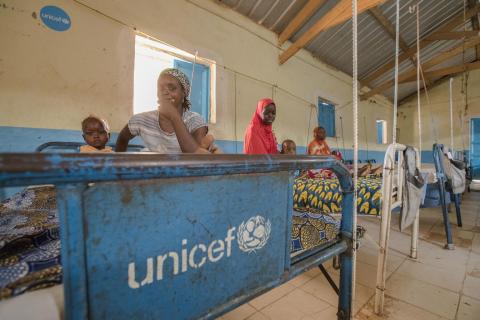 Amidst the Covid-19 pandemic, ECHO and UNICEF teamed up to ensure continuity of life-saving care for malnourished children in Niger