Malnutrition remains a major threat for newborns in Diffa

In Niger, one child out of twenty dies in its first year of life. When children suffer from severe acute malnutrition, they are more vulnerable to illnesses such as malaria and waterborne diseases.

Diffa, Niger - Family members wait in the outside entrance of the health facility. The grandmothers and mothers’ faces show fatigue and anxiety while several hands empty the pots with rice and beans on the ground. They pray on the floor asking for hope. The atmosphere feels tension despite the welcoming greetings of the health staff.

Inside the walls of the center, between fifteen and twenty children are torn between life and death because of severe acute malnutrition and its related diseases. We are at the Intensive Nutritional Rehabilitation Center, IPF, in Diffa, Niger.

Several babies do not exceed just two kilos, the skin of their arms and legs is wrinkled and their hair looks yellowish.

The mothers sit patiently on the beds next to their babies waiting for the news of the doctor. The two priorities for the nurses like Djemila is that the babies gain weight to get them out of the state of severe acute malnutrition with medical complications and immediately treat the frequent malaria cases. But she also needs to ensure that the technique used to feed the baby will contribute to enhance mother’s milk production so once back home, the baby will have enough breastmilk to continue gaining weight.

Sani arrived to the intensive care room with a weight of 2.3 kg and a size of 40 cm. A child of his age should weight at least 5 kg. His heart is tired, and his body weak. He is connected to the oxygen machine to breathe.

Upon his arrival at the IPF, the doctor diagnosed him with severe acute malnutrition, pneumonia, malaria, and a cardiac pathology.

‘Treating malnourished children is not an easy job. In Diffa, we’re under constant pressure. We have the moral responsibility of going beyond the nutritional assistance. We also provide psychological support to the affected mothers. We are mothers too, we know how they feel. The majority are refugees or displaced who suffered from trauma. Come, I’ll introduce you one case’ says Djemila.

In Niger, 1.8 million children are in need of humanitarian assistance

Sani is a refugee child from Nigeria. Her mother, Fatima, 24, three children, had to escape two years ago from Boko Haram in the town of Damasak, just two kilometers from the border between Nigeria and Niger.

The town in Nigeria where Fatima lived with her children and her husband has been seized by Boko Haram insurgents since the beginning of the conflict in 2015, including the kidnapping of women and children.

Sani was not even born when Fatima and her family fled to the temporary displacement sites in Chetimari, within Diffa´s region. Located in the far east of the country, more than 1300 kilometers from Niamey the capital, the region of Diffa is since 2015, the target of Boko Haram’s terrorist attacks.

Fatima gave birth of Sani in a health center in Damasak three months ago. The health problems started before the birth of the baby. Her mother was exposed to high levels of emotional stress and lack of food due to the consequences of the armed conflict and the continuous displacement from one town to another.

The baby was also born with a cardiopulmonary disease whose treatment is not available in Diffa. The conditions in which Fatima was pregnant increased the risk of Sani from suffering a congenital problem. The last doctor who treated heart problems moved to the capital Niamey months ago.

'During the months before my pregnancy, I began to waver and feel that I lacked strength. The daily food was not enough, I only ate millet and milk, and the nurse told me that I suffered from anemia’.

'When Sani was born, I could not barely breastfeed him. Something was not right’

According to Bernard Ayi, a UNICEF’s C4D officer in Diffa, ‘a breastfeeding mother should eat at least three diversified meals and a snack per day. The mother's nutrition directly affects her health, energy and well-being and the child’s one’.

Upon Fatima’s arrival at the temporary site for displaced people in Chetimari, she brought her little baby urgently to the nearest health center.

'In Chetimari the nurses told me that my little baby was in danger because, in addition to his malnutrition problem, he had contracted malaria and pneumonia. He didn’t tolerate the milk of my chest, he didn’t have any appetite and he vomited a few times. I began to fear for Sani's life’ says Fatima.

Fatima and Sani were transferred urgently to the Intensive Nutritional Rehabilitation Center (IPF) in the city of Diffa where Sani would be hospitalized for more than fifteen days.

Abale Laoali, is the doctor responsible of the IPF in Diffa city. It’s being a year since he started treating serious cases of severe acute malnutrition linked to preventable diseases, particularly the populations affected by displacement within the Diffa region.

‘In Diffa, and throughout the country, the children who are severely wasted and have access to deficient health services experience higher rates of malarial infections. This is also a reality in our center’ he affirms.

‘We’ve also observed that children affected by malaria experience a decrease of defenses in their immune system. This makes them lose their appetite, suffer from vomiting, pneumonia, or severe diarrheas. At this point, the risk of malnutrition is very high due to the diseases, the health and hygiene conditions, the lack of food, and displacement. It is the example of the little Sani'.

In Niger, only 23% of babies are exclusively breastfed during the first six months of life and only 20% of young children sleep under insecticide-treated mosquito nets to prevent malaria.

Despite the progress, more efforts are needed

Today, babies and young children in Niger are less likely to die of pneumonia, diarrhea, malaria, prematurity and other common childhood conditions than in the past. In 1990, 328 children under five died for every 1,000 born. That number dropped to 95 in 2017.

Malnutrition is not only about lack of food. It is a combination of other causes that lead to malnutrition in children, including poor diet at home, illnesses such as malaria and water-borne diseases, limited access to clean water and sanitation, lack of access to health services, inadequate child feeding and care practices.

In order to promote sustainable improvement for newborn survival in basic emergency care settings, UNICEF strengthened the human resources capacity building and improved access to supplies in the several medical facilities in charge for the treatment of severe acute malnutrition in Maradi, Zinder and Diffa.

Thanks to the support of partners, about 4 million children were covered per month by the 2018 Seasonal Malaria Chemoprevention Program and about 3.5 million were screened for malnutrition.

Almost twenty days after his hospitalization, Sani has regained weight. His malaria symptoms are gone. His mother Fatima has followed the advice of the nurses about her own nutrition and her baby’s. They will soon leave the IPF, although his heart problem will have a difficult solution. Sani has returned to breastfeed. Sani breathed slowly, but he does it on his own. Sani, has come back to life.

UNICEF works with the European Union, US AID, Skala Foundation, the Government of Italy, DFID-UK, Gvt. of Spain, Gvt. of Czech Republic and OCHA to support Niger’s government in the prevention and treatment of malnutrition. 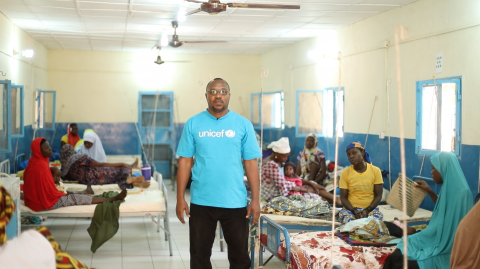 Together with the government of Niger, UNICEF is fighting child malnutrition. 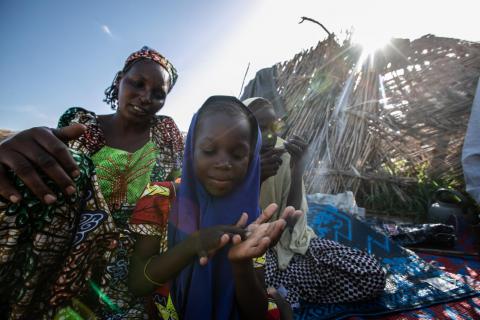 "Never leave a child behind"

In the Diffa region of Niger, more than 1 in 2 children require humanitarian assistance 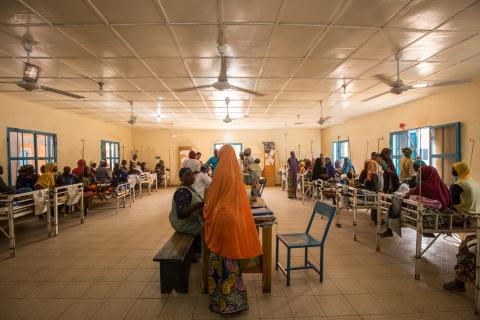 Hope in the nutrition recovery room

In Niger more than 10% of children suffer from severe acute malnutrition. 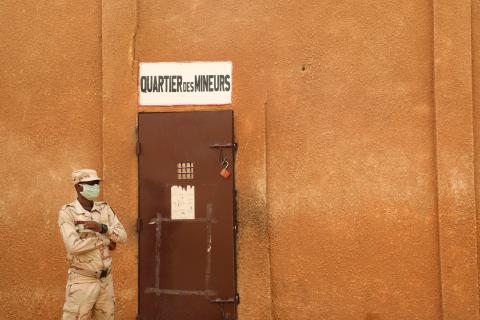