For every child, play

All names in this story have been changed to protect confidentiality.

Seven-year-old Puu Mon finished her kindergarten class in January 2021 in Kayah State. Normally, she loves playing with her pets and her older siblings – but in her new home at a camp for internally displaced people (IDP), normal life is not possible.

Around 100,000 people, a third of them children like Puu Mon, were forced to flee their homes following clashes between local armed groups and the Myanmar Armed Forces in May 2021.

For weeks before she arrived at the camp, Puu Mon and her family had to live in a jungle in Kayah on Myanmar’s south-east border with Thailand. The smallest of the country’s states, Kayah has seven townships and a population of around 330,000.

Seeking safety in the jungle

Puu Mon is one of 30,000 children left homeless. “I don’t like living in the Jungle,” says Puu. “I do want to sleep at my home. I want to take a bath but there is no water. I don’t like guns. I want to go back to my school and study again. I want to wear beautiful and clean dresses.”

Puu Mon’s mother, Daw Mai Zaw, a widow with two other children – her son is 14, her other daughter 12 – couldn’t see any other way of keeping them safe as the fighting reached their community. Stray bullets strafed their street and neighbours’ houses were destroyed in the shelling.

They had no time to take clothes or any household items with them. For almost two weeks they slept in the jungle at night and ran down to the nearest villages to beg for food and water when fighting paused. Eventually the family went to Loikaw, the state capital.

“But even here, I am worried about my children’s health,” Daw Mai Zaw says from the relative safety of an IDP camp. “I am also worried for their education and their safety. We hear that children are at risk from sexual abuse in some camps. I want to go back home and live with my children and relatives peacefully.”

UNICEF has been working with a UNHCR-led Interagency Coordination Group to plan humanitarian assistance in Kayah. UNICEF works with its partners to distribute more than 400 child protection kits and supportive supplies for those caring for displaced children like Puu Mon. The kits include colouring books, crayons and story books. So far, 3,600 items have been distributed, together with 30 tarpaulin sheets for makeshift shelters, reaching more than 6,900 children living in camps.

Toys in the middle of nowhere

Getting the supplies through was not easy but was made possible by the determination of local volunteers. UNICEF sought out transport services and eventually found one private bus driver who agreed to carry the supplies into Kayah State.

Daw Naw Aung is a local service provider. Despite having a 10-month-old baby, she travelled to the IDP camps to distribute the kits, taking her baby with her.

“As a mother with a young baby, I have faced many difficult times which threatened the lives of my baby and myself, but I had to continue helping my people,” she says.

“When I give the UNICEF kits to children in the camps, they are overjoyed to see toys in the middle of nowhere.

“They are stressed due to the dramatic changes from their normal life and disruption of daily routines. So, all toys and books are really helpful for healing their mental problems. The kits bring a little calm and peace to their fraught lives and help alleviate the trauma they have suffered.” 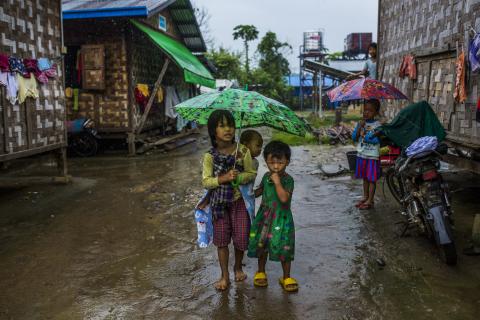 Children have the right to be kept safe from harm 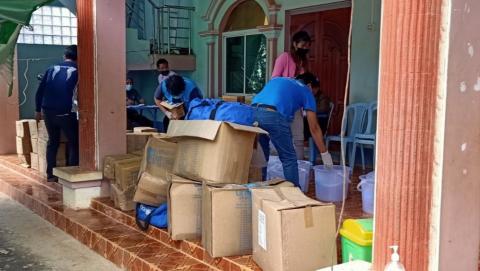