“The mother brought the little boy here as she was worried that he was not doing well,” said Mohamed Faisel, the Nutrition team leader at Action Contre la Faim’s Maungdaw Outpatient Therapeutic Feeding Programme (OTP) centre, “The boy needed immediate treatment as his health had been seriously compromised.” On admission, Sho Mel Khan weighed just 4.3 kilograms, around 4 kilograms less than would be expected for a child his age. He was diagnosed with severe acute malnutrition.

The centre, operated by Action Contre la Faim, a UNICEF Myanmar partner, provides access to comprehensive nutrition services for malnourished children, particularly those who are internally displaced, living in conflict affected and hard-to-reach communities in the central and northern parts of Rakhine State. Maungdaw centre is one of 11 OTP centres operated by Action Contre la Faim in Rakhine State.

As well as a twin sister, Sho Mel Khan has three other sisters. Their father, a taxi driver, struggles to make ends meet after experiencing a decline in income due to deterioration of the local economic situation following intercommunal violence which occurred in Maungdaw in 2017, driving many people away from the area.

“A rapid psychosocial evaluation was conducted with Sho Mel Khan’s mother. Results indicated that she appeared to lack parenting knowledge and had little confidence in her ability to take care of the twins,” added Mohamed Faisel. “She suffered from stress and often felt overwhelmed by her domestic responsibilities, which often went beyond taking care of her five children.”

“It was important for us to tackle the mother’s mental health challenges while at the same time providing Sho Mel Khan with medical treatment,” said Faisel.

Individual and group support sessions were organised as part of the therapeutic process. Psychosocial workers at the centre provided guidance to the mother on early childhood development, the importance of mother-and-child bonding and parenting skills.

As a result, Sho Mel Khan’s mother gradually became more knowledgeable and confident in breastfeeding and childcare practices, including maintenance of good hygiene in the home and adherence to the vaccination schedule. To support her further, the centre also provided her with a package of basic supplies, which includes soap bars, a plastic bottle, a plastic cup and water purification sachets.

Back to our little boy, after 48 days of treatment, Sho Mel Khan was discharged from the nutrition centre. By then, his weight was up to 6.2 kilograms and his mid-upper arm circumference had reached 125mm.

His mother’s affection for him was clearly on display. She constantly smiled, talked and played with him. Through the process, she had learnt more about the importance for child development of increasing physical contact with her child through hugs and skin to skin contact. A stronger connection was created between her and Sho Mel Khan.

“Going through this challenge, I am grateful for my son’s recovery and along the way I’ve learnt a lot of useful knowledge and skills that are essential to keep my family well,” said Sho Mel Khan’s mother.

In Rakhine State, nearly 14 percent of children are wasted and 38 per cent are stunted. Surveys indicate that both wasting and stunting are highest in northern townships. Across the state, UNICEF is working with the Government and partners to deliver humanitarian health and nutrition services and support the long-term improvement of health outcomes, particularly among the most vulnerable children among all communities. 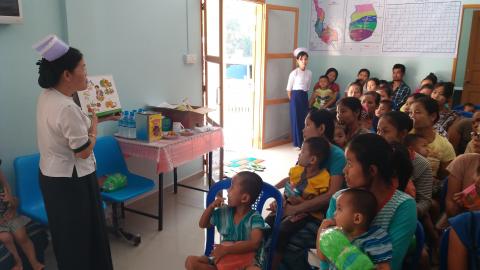 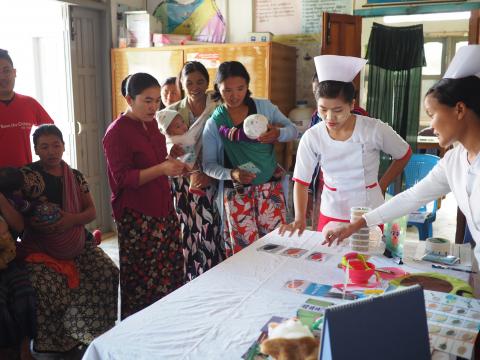 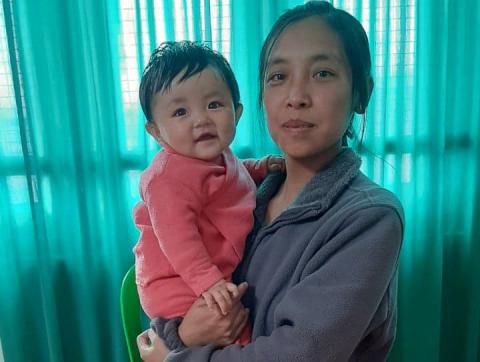 Protecting the baby; feeding the family

Worrying about survival and the future during COVID-19