In Myanmar, children and their families remain highly vulnerable, especially in conflictaffected areas. Figures show that in 2020, approximately 922,000 people will need protection, over 869,000 will need access to safe water and sanitation, 256,000 will need education and 9,400 will need to be treated for severe acute malnutrition (SAM). The situation in Rakhine State is increasingly complex. In 2019, fighting between the Myanmar Army and the Arakan Army led to the displacement of over 30,000 people, in addition to the 128,000 people internally displaced since 2012 and the 470,000 stateless people in need of humanitarian support. In Kachin State, the situation remains relatively stable, though 98,000 people remain internally displaced and are living in camps. In northern Shan State, shortterm displacement continued in 2019. Though fewer than 10,000 people are living in displacement camps in northern Shan, many have been displaced multiple times, exacerbating their  vulnerabilities. In these environments, children, particularly girls, are vulnerable to exploitation, sexual and gender-based violence, neglect, family separation, risky migration and abuse. Cramped camp conditions heighten these vulnerabilities, and limited access to basic services increases risks of communicable disease transmission. Children face additional risks from the increasing use of improvised explosive devices and landmines. 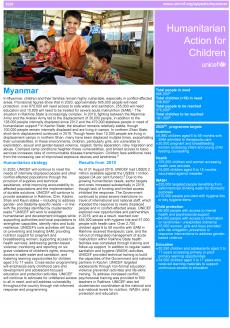 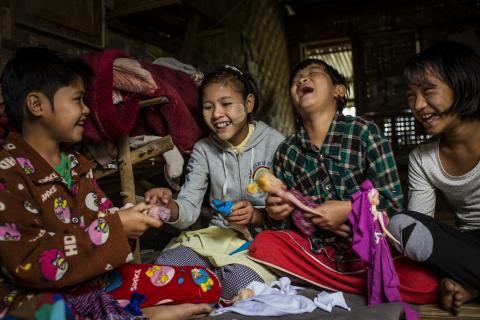 In 2019, UNICEF will address the humanitarian needs of crisis-affected and displaced people in Rakhine, Kachin, Kayin and Shan states.

UNICEF Myanmar Statement on the killing and injury of children in Myebon, Rakhine State

UNICEF Statement on the injury of at least 17 school children, in Buthidaung township, Rakhine State, Myanmar