“I only thought about taking my children to a safe place. That's what gave me strength.”

Metúge, Cabo Delgado - March 24, 2021 will never be forgotten by 38-year-old Ana José. "I didn't know what was happening. It was my neighbors who told me that the armed groups had arrived. I ran into them and they told me to run far away because they would be there for a week. I couldn't imagine what was going to happen," Ana recalls emotionally.

She lived in Palma with her husband José Eduardo and three children, Isaura (3 years old), Jhony (11 years old) and António (13 years old). Her husband was in their machamba (local farm) when she fled with her children. Besides the fear of not knowing if she would find a safe place for herself and her children, Ana also didn't know if she would ever see her husband again. "We only found my husband three months later." When she fled, Ana couldn't take anything with her, only the capulana (clothing made with local fabric) that was on her body, which also served to improvise a sheet and blanket for her children to sleep.

It was about 10 days of walking through the bush, under rain and intense sun. "All I could think about was getting my children to a safe place. That gave me strength." When she finally found shelter at the Pachinuapa accommodation center in the Nangua B community, she had access to a cell phone and was able to locate her husband, who told her that their house had been completely vandalized by the armed groups. Now that he knew where his family was, José then proceeded to the district of Metúge to meet them.

Next to Ana's tent also lives her oldest daughter Ernestina and her two grandchildren Alejazar and Sabina. Ernestina had already fled to Metúge earlier and found shelter in this center where she now lives near her mother and siblings.

Ana now has a safe place to live with access to clean water and sanitation through the local build latrines. She also received a kit from the United Nations Children's Fund (UNICEF) that contained capulanas (clothes with local fabric), buckets with lids, soap, sanitary pads, a water purifier (certeza), and a flashlight.

I really appreciate it, because, before the kit, I would go to fetch water using a bucket that a neighbor lent me, and a lot of dust would accumulate in the water.

At the center, her children also have access to recreational and educational activities offered by displaced people who also live at the center. "I am happy because although here is not my home, I feel safe here. I have made friends here and my children are also getting an education. This is where they learned to read and write. They come back to the tent singing songs in Portuguese. I am very happy about this! Jhony told me that now he will learn to write his own name."

UNICEF and partners, with support from the United States Agency for International Development (USAID) and the United Kingdom's Foreign, Commonwealth and Development Office (FCDO), are supporting displaced families in Nangua B with the distribution of hygiene kits and construction of latrines and hand-washing stations. Currently, about 1,060 families, including 5,300 internally displaced persons (IDPs), are living in the accommodation center in Nangua-B. 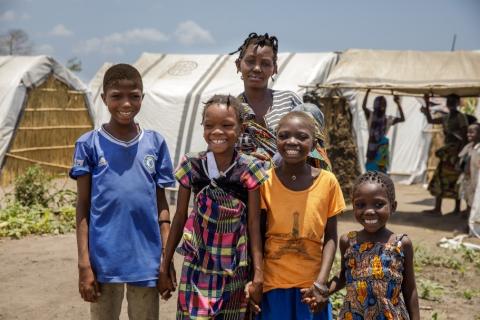 While fleeing the armed conflict with her four children, Maria Antônio found 10-year-old Zinha alone in the bush and decided to take her in. 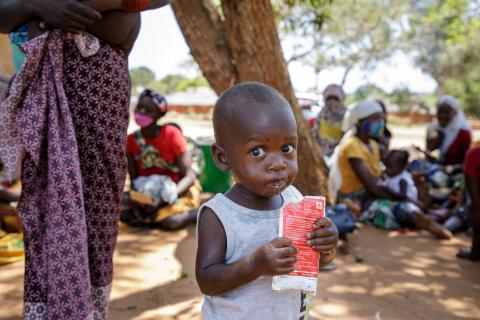 "Abdala who could barely walk, is now running"

When Abdala turned 1 year and 2 months old, he was discharged from the treatment for severe acute malnutrition, his mother Nataia recalls... 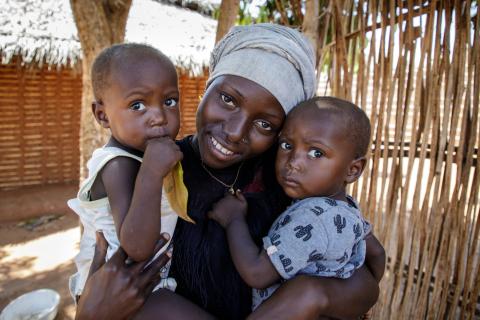 The twins were being treated for severe acute malnutrition, but relapsed and resumed treatment after the Community Health Worker (CHW) screening, in Mwaria. 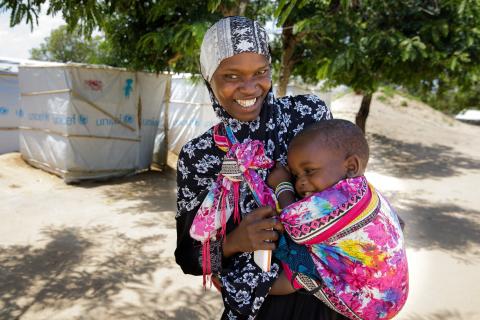 “Here we have water and shelter, but i dream of going back"

Pugia is grateful to have access to clean water, sanitation and hygiene, and a welcoming and safe space for herself and her family.