Ahmad; a strong voice in the darkness

As a presenter for “Ataa,” an online radio station in Hama, Ahmad, 19, is used to interviewing influential young people for his podcast. Marking international youth day this year, we turned the tables and interviewed him.

Hama, Syria, 12 August 2019- It was over six years ago that Ahmad, then 13 years-old, and his family gathered around the breakfast table at their home in Idlib, when a rocket hit.

“The next thing I remember is that we were all on the ground, buried under the rubble,”

recalls Ahmad whose eyes were hit by glass shrapnel, causing him to completely lose sight in his left eye and have blurry vision in his right one.

After their home was destroyed, the family had difficulty finding medical services in Idlib. They soon fled to Hama to seek treatment for Ahmad’s right eye.

“I was desperate; I felt lost and had no sense of self-worth,” continues Ahmad as he recalls this emotional period of his life. Ahmad’s injury and despair were made worse by the family’s movement from one place to another as they fled continuing violence.

“I tried to return to school but I was often bullied for barely being able to see,” he adds.

For over three years, Ahmad barely left his home until one day he summoned the will to prepare and sit for his national Grade 9 exams.

“It was very difficult to study with one eye, I had constant headaches, but I powered through,”

As exams approached, Ahmad felt his right eye regress, but he managed to sit for and pass all his tests with good results.

Only two months later, the shocking diagnosis came. Unfortunately, the right optic nerve had been hit by a shrapnel that doctors failed to spot, causing him to gradually lose sight until he became completely visually-impaired two years ago.

After his negative experiences at school, Ahmad chose not to return and instead signed up for an NGO supporting visually and hearing-impaired children, where he was able to interact with his peers and attend some classes.

“I felt a rift between the ‘able’ world and myself,” recalls Ahmad who felt self-conscious whenever around sighted people.

“I would stand absolutely still, afraid of moving and accidentally knocking something or someone and being told off,”

However, things started looking brighter for Ahmad when he met a team of UNICEF-supported life skills trainers at the NGO. The life skills programme helps the most vulnerable children and young people, including those with disabilities, to gain skills essential to their transition to adulthood such as critical thinking, communication, collaboration and creativity. Thanks to generous contributions from Canada, Germany and Japan, more than 180,000 young people benefitted from this programme in 2018 across Syria.

During the sessions, Ahmad voiced his dreams of becoming a radio presenter.

“We already had a studio at the NGO that the youth helped set up to record sound books for the visually-impaired,” says Shahama, a life skills trainer on the programme, “We asked Ahmad to be our first online radio presenter and he gladly accepted!”

When Ahmad first took his seat behind the microphone, it was clear he had talent.

“His voice intonation and his posture made him seem like a professional presenter,” says Shahama.

It was also a very emotional moment for Ahmad; “Welcome to Ataa Radio, this is Ahmad Karama; I still get goosebumps every time I say it!” adds Ahmad excitedly.

For his podcast, Ahmad interviews other influential youth, especially those who have visual impairments, to tell their stories, “I try to support others in the same way I found support,” he says.

Ahmad also decided to continue his learning and started preparing to sit for the national Grade 12 exams next year. He dreams of becoming an official radio presenter and is determined to make his dream come true. 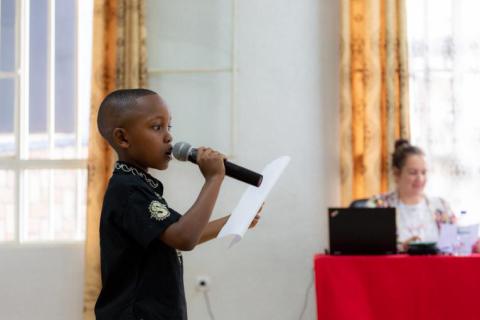 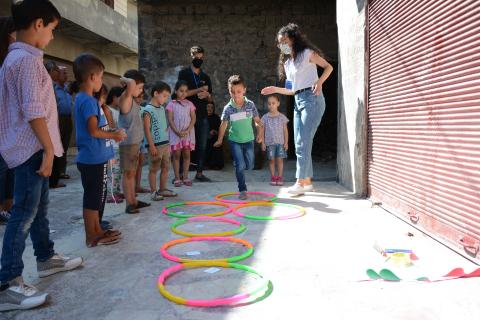 Awareness-raising on abuse and harassment by youth in Homs

UNICEF-supported volunteers teach children about their rights through interactive activities 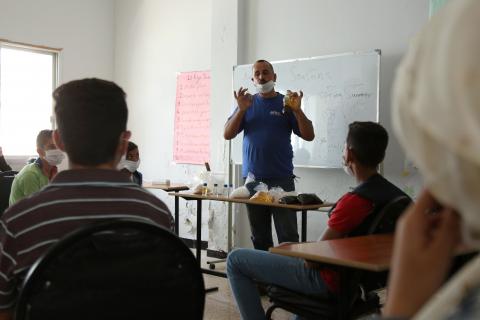 Do It Yourself; Syrian youth produce handmade detergents in 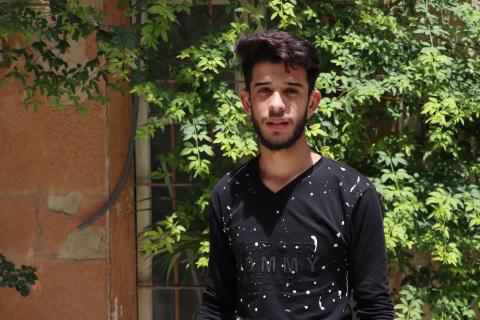 How a young man’s determination overcame disability, conflict and displacement