Who:    Ted Chaiban, UNICEF Regional Director for the Middle East and North Africa

*Arabic and English interpretation will be available.

Why:   To mark ten long years of war in Syria and present the consequences the conflict has had on children inside Syria and the neighbouring countries.

The decade-long war in Syria has had a devastating impact on children and childhood.

Inside Syria, there are more than 6 million children in need of assistance, many were born into the war and have known nothing but conflict, displacement and loss.

In the last year alone, the reported number of children in psychological distress has doubled, an indication to the lifelong consequences the war continues to have on Syria’s children mental health and wellbeing. Half of Syria’s children are not in school, deprived of education, and one in three schools inside Syria cannot be used because they are damaged, destroyed, sheltering displaced families or used for military purposes.

The COVID-19 pandemic has further compounded the situation of Syria’s children. The number of people in need has increased by 20 per cent in the last year alone, 65 per cent of families reported they cannot meet their basic needs and nearly 80 per cent of people in Syria live in poverty.

More than 10,000 children were verified killed or injured, nearly 700 education facilities and personnel have come under attack, while only half of the health facilities do not function. These figures are the tip of the iceberg, they make what the UN has been able to verify since 2014, when the verification process was put in place.

Our Regional Director, Ted Chaiban, has recently visited Syria where he met with children and families. In his trip, he also visited the Al-Hol camp in the northeast of Syria where 22,000 foreign children languish in camps and prison.

The war has a ripple effect on Syria’s neighbouring countries where 2.5 million children from Syria are registered as refugees. Jordan, Lebanon, Turkey, Iraq and Egypt host more than 80 per cent of the total caseload of Syrian refugees around the world.

Responding to the crisis in Syria over the past decade is one of the largest humanitarian operations in UNICEF’s history. Last year alone, UNICEF with partners reached over 3.7 million children with learning, 900,000 children received routine immunization or vaccination, and 400,000 children with psychosocial support in Syria and neighbouring countries. This is a highlight of the response UNICEF’s teams on the ground are undertaking.

To continue providing assistance to children and families in Syria and the neighbouring countries in 2021, UNINCEF is appealing for US$ 1.4 billion.

* The visits to Syria and Jordan are pre-recorded.

To confirm your attendance, submit questions in advance or for interview requests: 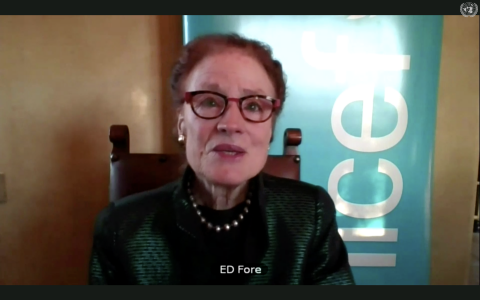