Djibouti, April 13, 2021- IOM, the International Organization for Migration, and UNICEF, have confirmed that at least 16 migrant children and 27 adults have died after a ship controlled by people smugglers capsized off the coast of Djibouti in the early hours of Monday morning, April 12. The vessel was packed with at least 60 migrants trying to return home to the Horn of Africa, having fled war-torn Yemen, where thousands of migrants are including children are stranded and trapped. This new tragedy shows the desperate measures people are resorting to escape the economic hardships exacerbated by the COVID-19 pandemic.

Among the dead are 8 boys, 8 girls, and at least 1 pregnant woman. A seven-year-old child is among one of the survivors rescued from the waters. This tragedy is the second such incident in just over a month involving the loss of life of child migrants and women. In early March 80 migrants including minors were thrown overboard by people smugglers in the same waters. At least 5 and up to 20 people perished. Data from 2021 show that a growing number of refugees and migrants, including, increasingly, women and younger children, face the dangers of the sea route to the Arabian Peninsula, but also from the coast of Yemen to Djibouti, despite the risks.

“IOM is deeply concerned about needless loss of innocent young lives, children, in this latest migrant sea tragedy. We are calling on our partners and donors to come together to reduce the enormous risks faced by migrants trying to return to Djibouti and those trying to reach Yemen to access Gulf countries, to avoid further loss of life”. Stephanie Daviot, Chief of Mission, IOM Djibouti

“We are worried that increasingly younger children are setting out on the migration route to the Arabian Peninsula or back to Djibouti from Yemen, or those returning from Yemen across the sea and at risk of being killed,” said Melva Johnson, UNICEF Representative. “We will continue to support childcare with our partners. But above all, we must continue our efforts to ensure the safety and well-being of migrant children."

IOM and UNICEF are already working with the authorities in Djibouti and plan to meet jointly with the local authorities to offer support and to discuss further measures for the prevention of such unnecessary tragedies. These measures will reinforce several actions already being carried out by the Government Of Djibouti with the support of the IOM and UNICEF to ensure the best possible conditions for people crossing Djibouti from border countries to Yemen by sea,  such as providing life-saving necessities including health care, food, water and shelter. 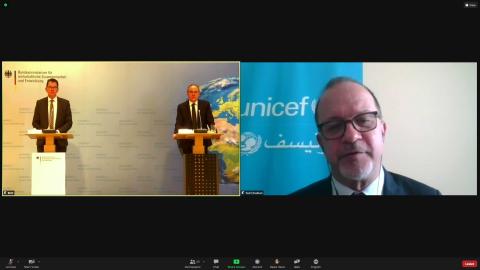 Press Conference with the UNICEF German National Committee: 10 years on the war on Syria