Director, Regional Office for the Middle East and North Africa 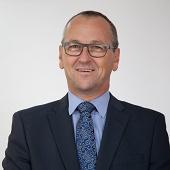 Geert Cappelaere took up the post of UNICEF Regional Director for the Middle East and North Africa in October 2016.

Before joining UNICEF, he was Chair of the Belgian Royal Commission on Child Abuse and Exploitation and affiliated to the University of Gent. He is author of a number of internationally renowned publications, including Children deprived of their Liberty: Rights and Realities. He actively contributed to the drafting of several international legal instruments in the area of child protection and children’s rights.

Fluent in English, French and Dutch, Mr. Cappelaere holds a Doctorandus (post-graduate degree) in criminology and a Bachelor of Arts in Psychology and Education Sciences from the University of Gent.

A national of Belgium, he is married and has three children.