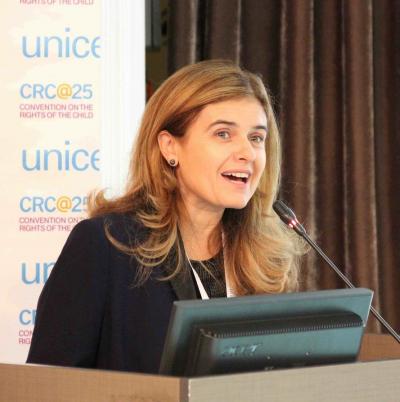 Paloma Escudero was appointed Director of Communications at UNICEF in April 2013.

Bringing her extensive experience and expertise in the areas of communications, fundraising, advocacy and brand management, she oversees UNICEF's global public outreach and communications as its senior communication official.

Prior to the appointment, Ms. Escudero had already been well known among the UNICEF family as Executive Director of the Spanish National Committee. Under her management between 2007 and 2013, the Committee was transformed into a highly efficient organization ─ increasing its contribution to UNICEF programmes in over 150 developing countries and contributing significantly to emergencies such as the Haiti earthquake in 2010.

Ms. Escudero started her professional career, which spans more than two decades, in 1989 at Procter & Gamble Spain, where she was the company’s Brand Manager overseeing the marketing teams responsible for the brand repositioning of products.

After a sabbatical year spent travelling around the world with her husband, and working as an aid worker in Guatemala, Ms. Escudero joined Oxfam in 1997. In 2000, she became the Director of the Oxfam International Advocacy Office for the European Union. First based in Spain and later in Brussels, she worked on issues such as overseas development aid, external debt, humanitarian law, international agriculture and trade, and climate change.

Escudero holds a Bachelor of Arts in Economics and Business Sciences from ICADE – Universidad Pontificia Comillas in Madrid. She obtained an Erasmus grant to specialize in marketing at ESSEC Business School in Paris.

IMAGE RELEASE - CREDIT: © UNICEF/UNI142403/Markisz. This photograph is available for use by bona fide news media organizations as part of reports or feature stories on UNICEF. Release permission is hereby granted for this purpose on the following conditions: - Image content may not be changed by digital or any other means, except cropping. - Image may not be archived in any format or distributed to a third party by any non-UNICEF entity. No other rights than those specified are either granted or implied. THANK YOU FOR YOUR INTEREST IN UNICEF.