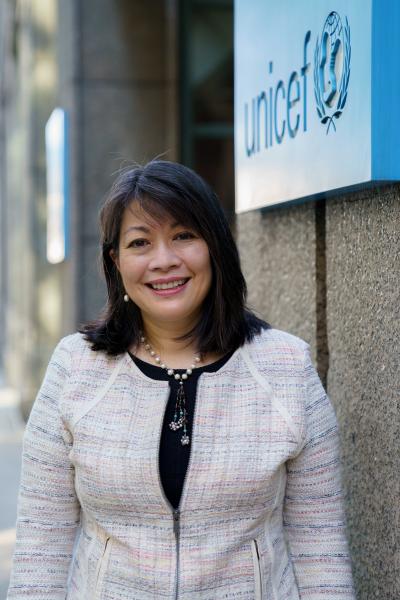 June Kunugi became the Director of UNICEF’s Public Partnerships Division in April 2021. She oversees the organization’s resource mobilization from the public sector, its engagement with permanent missions and governments on multilateral affairs in the inter-governmental space, and its UN partnerships. Ms. Kunugi has worked in UNICEF for over 29 years at country and headquarters levels.

From September 2017 to April 2021, Ms. Kunugi served as the UNICEF Representative in Myanmar, where she oversaw child rights-based development programs, humanitarian response, advocacy, partnerships, and operations, and over 220 staff in 9 offices across the country.

Prior to that, she headed UNICEF country and area offices in the State of Palestine, Bosnia and Herzegovina, and Bahrain, Kuwait, Oman, Qatar, Saudi Arabia, and the United Arab Emirates.

Ms. Kunugi has served three times in UNICEF’s New York Headquarters - in the Division of Public Affairs, the Office of the Executive Director, and as Deputy Director and then acting Director of UNICEF’s Public-Sector Alliances and Resource Mobilization. She was also the Director of UNICEF’s Tokyo office, overseeing public sector partnerships and resource mobilization in Japan and the Republic of Korea.

She started her career in UNICEF working in Communications, including in Viet Nam as a Junior Professional Officer sponsored by the Government of Japan, and later in Bangladesh, first as Communications officer, then as Chief of the section.

Ms. Kunugi is a national of Japan.  She holds a Bachelor of Arts (Hons.) degree with a double major in East Asian Studies and Romance Languages and Literatures from Wesleyan University in the United States, and a Master of Science in Journalism from Columbia University.