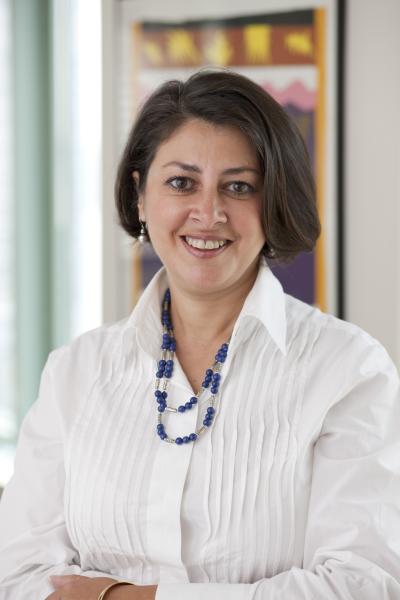 Afshan Khan is the UNICEF Regional Director for Europe and Central Asia, and the Special Coordinator for the Refuge and Migrant Response in Europe. She is based in Geneva.

Ms. Khan has been an international public servant for over 30 years. Previously she was the Director of Emergency Programmes for UNICEF, and she has also held other senior positions including Director of Public-Sector Alliances and Resource Mobilization; Associate Regional Director for Eastern and Southern Africa; and the UNICEF Representative in Jamaica. Ms. Khan has extensive field experience including assignments in Kenya; Mozambique; Democratic Republic of Congo; and Colombia. She also has broad United Nations-wide expertise stemming from assignments with the Inter-Agency Standing Committee for Humanitarian Affairs (IASC) in Geneva; the Executive Office of the Secretary- General; and the United Nations Development Group. From 2012 to 2014 Ms. Khan took leave from the United Nations to become the CEO of Women for Women International. In that role, she was responsible for setting the strategic vision and mobilizing the necessary resources for women rebuilding their lives after war.

Ms. Khan was born in Hyderabad, India, and grew up in Montreal, Canada. She has a Master’s degree in Public Policy from the Johns Hopkins School for Advanced International Studies, and a Bachelor’s degree in Political Science from McGill University.

IMAGE RELEASE - © UNICEF/Dan Bigelow. This photograph is available for use by bona fide news media organizations as part of reports or feature stories on UNICEF. Release permission is hereby granted for this purpose on the following conditions: - Image content may not be changed by digital or any other means, except cropping. - Image may not be archived in any format or distributed to a third party by any non-UNICEF entity. No other rights than those specified are either granted or implied. THANK YOU FOR YOUR INTEREST IN UNICEF