Through a new anti-bullying campaign, UNICEF and the Ministry of Education are tackling bullying.

In the Maldives, one in four children are bullied at school, according to the 2014 Global School-based Student Health Survey. Sometimes, that bullying is mental – children are torn down because they are different than those around them. Other times, that bullying is physical – of adolescents who are bullied in the Maldives, seven percent are frequently kicked, hit, pushed, shoved or locked indoors. And countless more are bullied online, a method of harm and humiliation that is nearly inescapable, as it follows students in and out of the classroom.

To address bullying in all its forms, UNICEF and the Ministry of Education teamed up to create and implement a national anti-bullying policy. The policy – which is part of the new government’s 100 Day Plan – aims to tackle bullying at its roots. The design of the policy, along with the activities put forward therein, involve participation from teachers, students, parents and community members.

“Bullying can be a really difficult thing to tackle,” said Fathimath Azza, Director General of the Ministry of Education. “Unless everyone working with children – especially teachers and those within the school system – are aware of the intricacies and complexities of bullying, something very unfortunate can happen. This policy is meant to help that.”

This isn’t the first time the Ministry of Education is talking about bullying in the Maldives. Over the years, the reporting of bullying – especially cyberbullying – has risen. Faced with a continued incidence of bullying, however, the Ministry of Education realized it needed to make bold changes to the current system. To do so, they worked with UNICEF to craft a new anti-bullying policy, one that promotes every child’s right to learn and thrive in a safe, supportive school environment.

The new policy is based on 14 consultations with nearly 500 individuals, including students of all ages. These consultations helped structure the policy and led to the integration of measures students themselves believe will have a greater impact.

“The biggest news flash for me was that children don’t trust adults to solve these problems,” Azza said. “They think that if adults intervene, the problem will escalate. Because of that, we are exploring peer-to-peer interventions like student groups and buddy systems.”

Peer-led interventions are particularly important for those who migrate between islands for education. With some islands hundreds of kilometers from one another, children who migrate often stick out among their new peers, making them a common target for bullies. In a 2015 study, 41 percent of children who moved to Malé, the capital city, said that bullying was a critical issue in their schools. The buddy system can help a child moving from one school to another make an immediate friend – or at the very least, have someone to look out for them upon arrival.

“Bullying can be a really difficult thing to tackle,” said Fathimath Azza, Director General of the Ministry of Education. “Unless everyone working with children – especially teachers and those within the school system – are aware of the intricacies and complexities of bullying, something very unfortunate can happen. This policy is meant to help that.”

“Most of the time, when we are bullied, there is no one to share our feelings with,” said a 15-year-old student* in Addu City. “If we talk to our parents, that might end up disturbing us more. The only option is to share with our friends because they understand what we’re going through.”

That being said, the policy still encourages everyone in the education system, including parents, to take responsibility for preventing and mitigating bullying. Particularly on small islands, it’s important to tackle bullying with a community-wide approach, and ensure parents, adults and everyone children interact with know how to handle bullying if they witness it. The policy suggests creating parents’ groups and holding awareness sessions for caregivers. The policy also attempts to address a huge gap in the current education system: the lack of trained counselors available to students.

Throughout the Maldives, Azza said, there are only 60 counselors for over 87,300 students, not all of whom are well trained. These students are scattered among nearly 200 islands – some of which are in remote, far-flung locations – a geographical composition that makes the even distribution of quality, highly trained educational staff (and associated resources) challenging and at times, costly. This year, UNICEF will continue to support the Ministry of Education to train more counselors and increase existing counselors’ capacity to respond to the needs of students. We are also linking anti-bullying initiatives to our Community Social Groups, or CSGs, on each island.

CSGs are made up of key individuals interacting with children, including those from the school system, social services, the health sector, and the police force, among others. By encouraging these individuals to work together on child protection cases and issues, UNICEF is strengthening the support system for children throughout the country. Involvement of CSGs will take the policy one step further, creating a more holistic approach to the problem and ensuring entire communities are aware of bullying and its effects.

“Increasing awareness of bullying is very important, as not everybody is aware of how serious these issues are and the impact [bullying] has on a person’s sense of self-worth and future relationships,” said 20-year-old Mazna Mausoom Mueen, who was educated in Malé. “It is important to encourage kids to stand up for themselves and talk to someone about it, rather than ‘being tough’ and dealing with it themselves.” 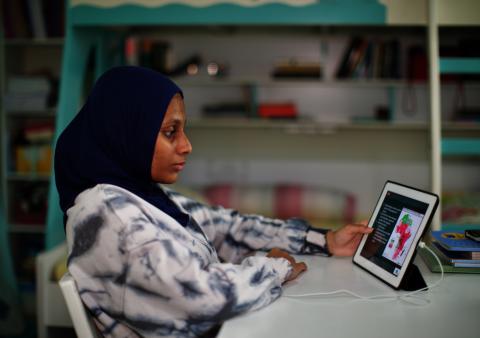 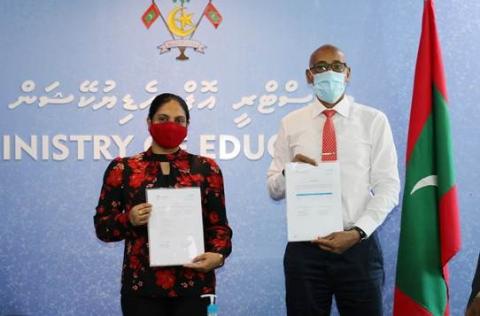 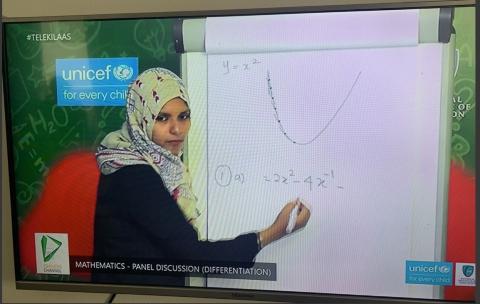 Online and televised learning during the COVID-19 pandemic 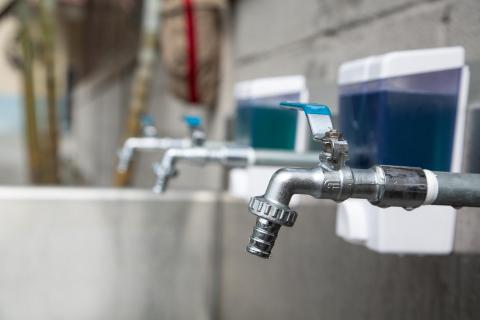