Petro Muonja, 31, is a well-known comedian in Nsanje district where he stars in a duo that tackles public health challenges and  other topical issues in Sena language, widely spoken in the vast valley along the southern border of Malawi.

Away from shooting the comics shared free of charge on social media, the father of four is one of 11 health surveillance assistants (HSA) at Ndamera Health Centre along the boundary between Malawi and Mozambique.

He has been part of the border district's emergency response to cholera since the first case arrived from Migaza trading centre across the border.

“The first patient used a boat to cross the Shire River via Ndindi Marsh. Upon docking at Bitilinyu Fisheries Zone, he took a kabaza (bicycle taxi) to the health centre, but ended up infecting the cyclist in the process," he narrates.

The trend of infection illustrates how disease outbreaks tend to cross the porous borders at the pace people travel.

To reduce the cross-border spread, Muonja wakes up as early as 5am and hurries to the docking site where he puts chlorine to communal drinking water and disinfects boats and canoes crossing the marsh where safe water and latrines remain inaccessible to the locals who mostly rely on fishing and farming.

During a visit to the wetland, Muonja was wearing a blue coverall, with a sprayer saddling on his back. As a dugout canoe docked on shore, he greeted the passengers with a smile, gave them small talk about the cholera outbreak and quickly sprayed chlorine on the vessel. He also sprayed the hands and feet of the  new arrivals to remove cholera germs.

"I have to do this from 6am to 12 noon because we are racing against time to stop the outbreak that has already killed three patients from about 70 confirmed cases in the district," he explains smilingly.

Such efforts have helped reduce pressure on the health centre, currently overwhelmed by patients from Mozambique who are known to have infected boat operators and cyclists on the way.

The influx left the border strip's  sole cholera treatment centre with 17 patients at the peak of the outbreak.

Health authorities have since banned cyclists from carrying cholera suspects and patients, leaving the task to an ambulance team.

“Nothing excites me more than seeing cholera patients returning home healthy. It assures me that we will win the battle against the disease that kills within hours if not managed properly," he said.

The outbreak has increased the workload of  health workers in the border district.

Muonja thanks UNICEF for not only providing medical supplies for the cholera treatment centre but also the chlorine for the community outreach to stop cholera transmission beyond patients’ homes and ports of entry.

“We need more chlorine.  The outbreak has compelled us to intensify infection prevention chores not only at the health centre and surrounding communities but also at the docking site. We are committed to make Nsanje cholera-free by ensuring everyone is living in a safe place and not drinking contaminated water,” he states.

The HSA says more chlorine supply could fast track cholera prevention and control in  overcrowded markets and uncharted routes where both Malawians and Mozambicans constantly interact amid the public health challenge.

He says the outbreak may surge again if not kept in check.

"Cholera spreads fast. After the first case, the second came from the same family the next day and then came more cases every day. At the peak, we had 12 women and five men in the cholera treatment camp."

Muonja was relieved that by mid-April, there was only one case admitted to the facility.

For him, this signaled triumph over the diarrhea disease outbreak confirmed in Nsanje and Machinga districts. But it was no end to the day and night work shifts as boatloads of people still poured in from Mozambique, with some  suspects putting up with their Malawian kinspeople along the blurred border where they freely intermarry, fish and do busines together.

The boats constitute a lifeline for the Mozambicans from Damiano, Nasho, Shuanga and Ngulengule villages in Murumbara district who buy basics, sell their crops and get health care on the Malawian side.

When Muonja is not disinfecting the boats and their passengers, he is likely busy at the cholera treatment centre or in the neighbouring communities. The outbreak has ballooned his work.

Dr Waleke Khumalo, the district medical officer in Nsanje, says the chlorine supplies from UNICEF  has dramatically boosted the war on cholera in the swampy settlements  with scattered water points and latrines.

"We need chlorine because the affected communities on both sides waterlogged. When floods caused by Tropical Storm Ana struck in January, the few latrines crumbled and human waste flowed into the water people use.  To get safe water is tricky because most boreholes in the area are salty," he explains.

"Clearly, people on the move are disproportionately affected. When a boat rider and a cyclist who took a patient to Ndamera health centre  were infected, we had to stop them from carrying patients. Now the HSAs have to disinfect all boats and provide clean water even for handwashing," Khumalo explains.

Muonja says the supplies, especially chlorine, have proved vital in preventing possible infections before they overwhelm the rural health centre without a clinician. The existing staff includes two medical assistants, four nurses, a pharmacist and 11 HSAs. 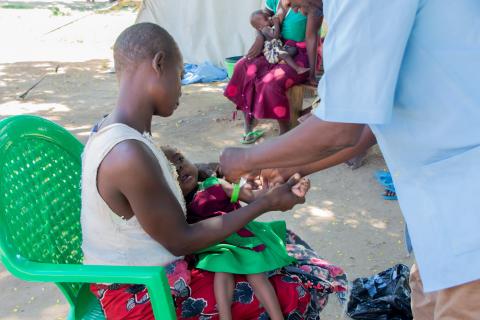 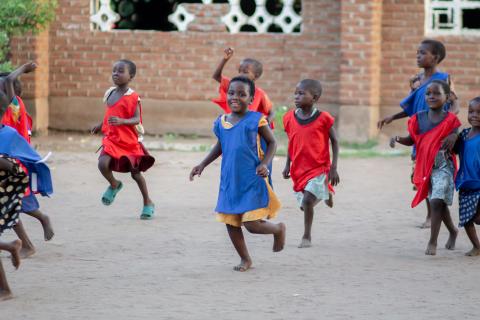 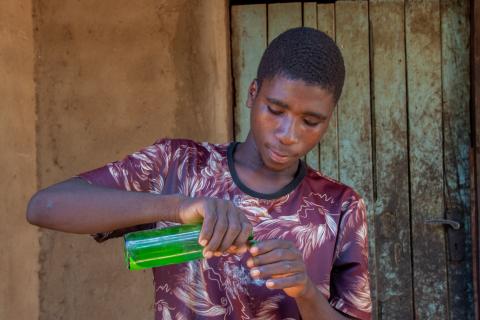 The outbreak caught us unaware

Fight cholera in the flood prone district of Nsanje 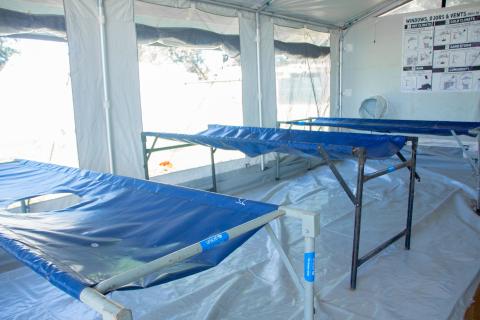