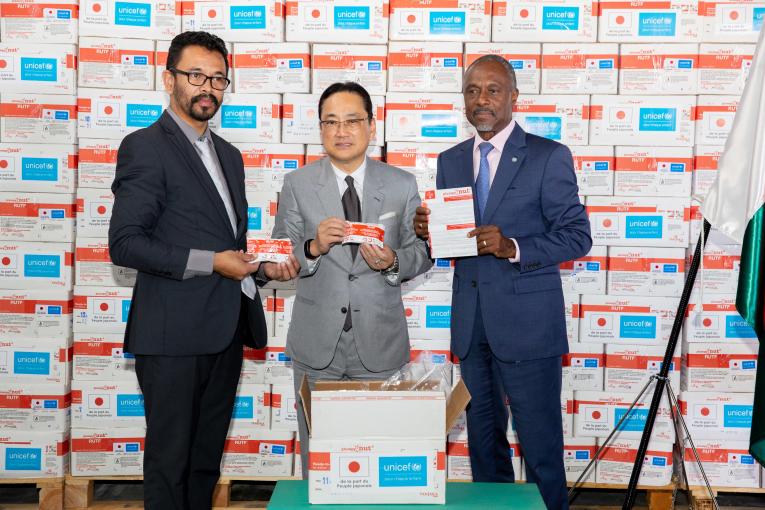 Antananarivo March 19, 2020: Six thousand four hundred additional cartons of Plumpy'Nut®, a ready-to-use therapeutic food for the treatment of severely malnourished children, were officially handed over to His Excellency AHMAD Ahmad, Minister of Public Health, today. They were donated by His Excellency HIGUCHI Yoshihiro, Ambassador of Japan to Madagascar and Mr Michel SAINT-LOT, Representative of UNICEF in Madagascar to strengthen the response to malnutrition in the Great South.

The donation is part of a $800,000 project funded by the Japanese government to reinforce nutrition surveillance and response in eight drought-prone southern districts.

This donation to the Ministry of Health is intended for the treatment of severe acute malnutrition in children aged 6 to 59 months in eight districts of the Great South affected by food insecurity (Amboasary, Ambovombe, Ampanihy, Bekily, Beloha, Betioky, Taolagnaro and Tsihombe). It adds to the 5,000 boxes already donated and distributed in June 2019 to contribute to the survival of severely malnourished children.

After one-year implementation, the project ends on a positive note since the results have largely exceeded the objectives. 185,000 children aged 6 to 59 months have been screened for acute malnutrition and 14,255 severely malnourished children have been treated in 208 health centers, with the support of UNICEF to the Ministry of Public Health.

"This donation from the Japanese government has been a huge help to malnourished children in the south. It has arrived just at the right time for strengthening interventions by UNICEF in response to malnutrition in the south. We hope these therapeutic foods will save 6,400 children suffering from severe acute malnutrition," said Michel Saint-Lot, UNICEF Representative, while addressing the new Japanese Ambassador who recently took office in Madagascar.

The activities implemented with this funding were as follows:

• Support for the Nutrition Surveillance System;
• Deployment of four mobile nutrition teams for the treatment of severe acute malnutrition;
• Capacity building for 27,000 mothers in screening techniques and reporting on cases of acute malnutrition in their communities;
• Purchase of 5,000 cartons of Plumpy’Nut® for the treatment and survival of approximately 5,000 children suffering from severe acute malnutrition. These boxes were officially handed over to the Ministry of Public Health by the Japanese Ambassador and the UNICEF Representative on June 14, 2019 and;
• At the request of the Ministry of Public Health on November 11, 2019, the purchase of additional 6,400 cartons of Plumpy’Nut® to face the lean season/hunger gap in the south. 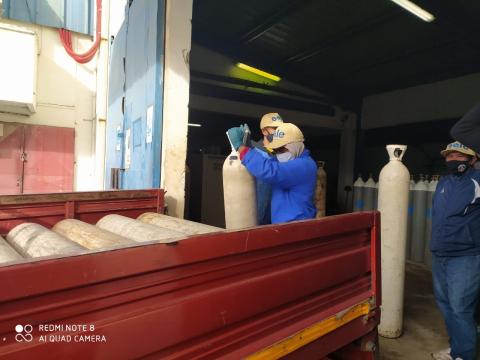 UNICEF brings a breath of fresh air to hospitals

A glimmer of hope to support people with disabilities 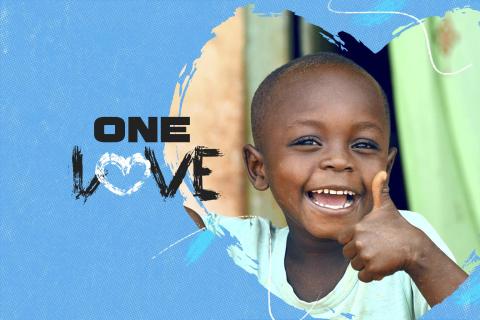