UNICEF’s WASH programme, in partnership with the Lebanese government, aims to reduce child vulnerability for both national and refugee populations.

The Syrian crisis has entered its sixth year, and spillover effects have reached critical levels in Lebanon. Children and their families living in Informal Settlements (ISs) or other temporary, often makeshift living environments without access to appropriate WASH services are among the most vulnerable populations in Lebanon.

Despite the challenging operating environment, UNICEF directly and indirectly supports the Government of Lebanon to respond to the Syria refuges crises since 2012 at multiple fronts. At the service delivery front, UNICEF pursues a dual pronged strategy for addressing the WASH needs. The first pillar revolves around the sphere of service provision for more than 190,000 people out of 253,000 living in Informal Settlements (ISs) level ensuring the recurrent Water, Sanitation and Hygiene (WASH) needs of the most vulnerable segment are continuously met and water related diseases mitigated.

The second pillar aims at reaching 390,000 people out of the most vulnerable refugees and host communities with sustainable WASH services and simultaneously reducing tensions. Overall, UNICEF represents 58% of the WASH sector delivery at the water service provision front.

Access to a public piped network as a drinking water source has declined from 57% to 35% between 2004 to 2009, while since 2000 only 8% of wastewater is treated. Many poor children, both Lebanese and refugees, are without access to safe water, a fundamental right and a prerequisite for healthy physical development.

The health and environmental impacts are evident, with waterborne diseases including dysentery, hepatitis A, leishmaniosis and typhoid being the leading diseases affecting children, peaking among those aged 0-4 years.

UNICEF is largest provider of WASH services in informal settlements (IS): covering more than 80% of total IS inhabitants in over 4,100 IS daily via six NGO partners.

UNICEF’s enduring collaboration with the Lebanese Government, particularly with the Ministry of Energy and Water and Water Establishments, has facilitated the rapid expansion of the WASH response including: 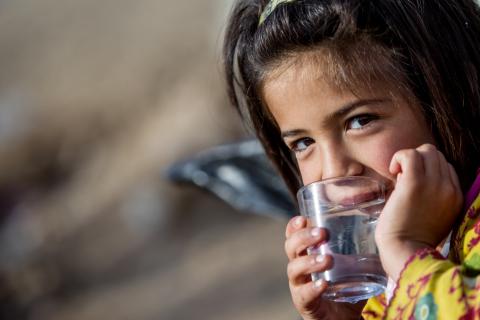