Educating Hayan - “If you don’t want to come to school, don’t come. But in the end, you’ll lose”.

It is the vision of this UNICEF-supported and Government of Germany-funded programme that every child – regardless of nationality, financial or social status – be offered a place in education.

What he lacks in physical stature, young Hayan more than makes up for through his demeanour and presence. An abundance of self-confidence belies the fact the he is not yet a teenager but, to become the boy that he is, this 12-year-old has had to make many tough choices alone, and he is adamant that a continuous place at school remains central to both his current and future happiness.

Hayan and his mother arrived in Lebanon in 2012. Forced away from their home city of Damascus, they travelled to the south of Lebanon while the father chose to remain in Syria.

With his first year spent mostly at home, sometimes he’d roam the streets around Zebdine looking for friends and wild ways to entertain himself - which almost always ended up with him in trouble.

He’s pragmatic about this first year though and, with a shrug of his shoulders, reflects “I was doing okay. Being here was better than being in Damascus, and I wasn’t keen to go to school anyway. Even my mother was happy with the way things were – she didn’t want me to go to school either”.

As his year on the streets passed by, boredom set in. He recalls seeing children on buses and began to ask why he couldn’t be on one and go to a school of his own. Still, his mother was less than enthusiastic and expressed her fear that educating Hayan would be prohibitively expensive. Nonetheless, he persisted – Hayan is nothing if not energetically persuasive – until his mother agreed to ask around at local schools.

"I knew I’d like school, I decided I wanted to learn and to have friends."

“I saw too many children together, all looking happy and playing on their way to school. And, once I made up my mind, I knew I wouldn’t stop until I found a place of my own. It was important to me because I knew I’d like school – I decided I wanted to learn and to have friends”.

Today, as part of the UNICEF Lebanon-supported ‘second shift’ enrolment programme - funded by Germany through the German Development Bank KfW - Hayan attends Zebdine Intermediate Public School outside Nabatieh. It is the programme’s vision that every child – regardless of nationality, financial or social status – be offered a place in education. Through the generosity of international donors, in this case Germany, the cost of schooling is fully covered, eliminating a large and often insurmountable obstacle for families trying to secure a place for their children in schools.

"I used to misbehave and was even threatened with suspension because of my behaviour."

He’s been at the school for five-years now, and is struggling to keep up with the academic curriculum. Nevertheless, his regular attendance at lessons has taught him much about the value of school in every child’s life.

“I’ve changed”, he smiles, adding, “and it’s being at school that has changed me. I used to misbehave and was even threatened with suspension because of my behaviour. Now though, I try to encourage others to behave! In class I work hard and stay focused. If someone tries to distract me, I ignore them. I now know there is a time to work and a time to play. I’ve felt this more than ever this year – it’s good to have rules, it’s good to have discipline. And school is the best place for both”.

"Now, I try to encourage others to behave! In class I work hard and stay focused."

For Hayan, education is his priority. However, it’s not the only area of life he’s chosen to work hard in. When he was eight, he took a job.

“I work at a car spare-parts shop for 4 hours a day. I enjoy it a lot. I work for a Lebanese man called Fouad. He’s a kind man and he pays me a salary. He’s interested in my school-work, and has been very supportive of me continuing to get an education”, he tells us.

“There are two other boys working with me. They’re both my friends now, but neither of them goes to school. I try to encourage them to come with me, I tell them that UNICEF made it easy to join and that they don’t even have to pay, but they’re just not interested”.

It is Hayan’s determination and the generosity of international donors that have given this young boy a chance in life.

He announces to us as he gets up to leave, “Now, after so many years, my mother is proud of me - I’m proud of myself too,” turning at the door he adds, “And to any boys who won’t come to school I say that if they don’t want to come, then let them not come. But in the end, they’ll lose”. 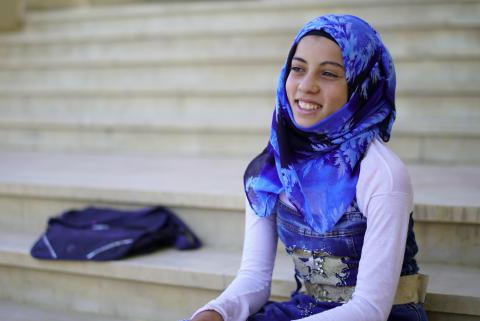 Easing a child’s path back into education

“When I started going to school, my life changed” 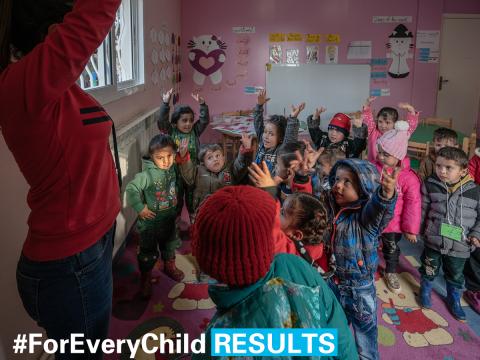 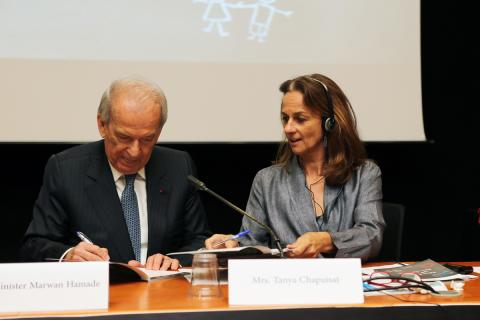 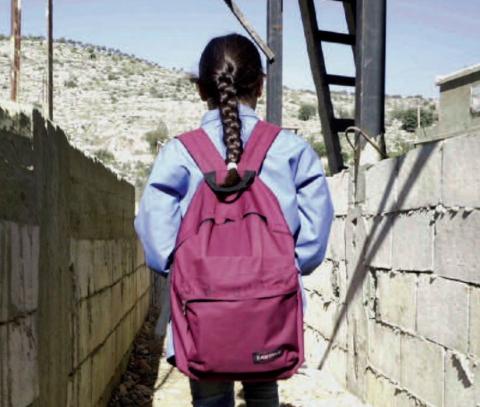 Barriers to Education for Syrian Refugee Children in Lebanon

Children should learn to write their names.