UNICEF’s latest child protection community initiatives raises awareness of the importance of inclusive public spaces. These parks offer an inclusive space for all children to gather in a natural and safe child friendly environment.

As part of its child protection support programme for the most vulnerable children of North Bekaa and Mount Lebanon, UNICEF partnered with international NGO Terre des hommes Italy and British charity Catalytic Action in the rehabilitation of community parks in two of the Bekaa region’s most marginalised cities – Hermel and Arsal. These parks are intended to offer families, youth and children a child friendly environment that is inclusive and welcoming to all children, including those less able.

Part of UNICEF Lebanon’s child protection rolling work plan for 2019-2020 “Girls, boys, families and communities in the most disadvantaged localities have increased capacities to promote practices that protect them”, by embracing a practical approach, the latest initiative aims to raise awareness on child’s rights and promotes the importance of inclusive public spaces that take in to account the different needs and capacities of children.

Local community members, the local municipality and other stakeholders were empowered through the extensive participatory approach adopted for the design of these innovative inclusive spaces. Throughout the process, each was engaged in order to jointly identify community needs and to ensure ownership sustainability.

London-based Catalytic Action executed the final designs for the new parks following this series of design activities which engaged people across nationalities, gender, and age. The initiative aims to practically demonstrate that inclusive spaces can be developed using local materials the skills of local metalworkers and construction companies – further benefiting the local economy in the process.

Both spaces were selected due to their history as existing informal, yet well-known, family spaces. Together, UNICEF Lebanon, Terres des Hommes Italy and Catalytic action set about creating modern, accessible and inclusive play areas for both city’s children.

“We were adamant that we would enhance the sites rather than reinvent them”, said Catalytic Action’s Riccardo Luca Conti and Joana Dabaj, adding, “one of the most beautiful things about the Hermel park in particular is that we retained all the aspects of nature, and we built within it”.

After six months of meetings and development, both parks opened simultaneously at the end of November 2019. Now including speaking pipes, ping pong, seating and tables, tree stumps, three inclusive play stations, and a small football pitch, both parks are open to the public free of charge. The opening day involved a programme of events and activities including painting, mask making, and music – plus a lot of running around!

For twelve-year-old Nour, a resident of Hermel and part of the city’s park rehabilitation participatory process, everything turned out exactly like she’d hoped it would be. “It’s amazing”, she said, “and so good to see so many children here having fun today. I’m proud that I’ve been able to be a part of the creation of this park. It feels like my park in my city. I’ll come often, and will make sure all children – of all abilities - use it fully in the way we wanted them to when we planned it!”

Sana Assaf, a teacher at a Hermel school for children with disabilities reflected that her city’s new park is truly one of a kind – there having previously been no spaces in Hermel with activities for her pupils of varying ability. “The children are happy to be here. Our children, and others like them, enjoy being in open, and green spaces. It’s here that they feel safe”.

When asked to pick a favourite activity, 7-year-old Fatima she said everything was her favourite, and added “It is my first time ever in a park – and I can’t wait to come back - next time I’ll bring my parents and brother!”

Deputy Mayor, Hajj Issam Bleibil, was another visitor to the Hermel park on its opening day. “I’m very impressed by what UNICEF have led the creation of alongside international partners in collaboration with local families and businesses. Together, they’ve done it for children of all abilities in Hermel. It shows what the community can achieve when it decides to work together,” he said.

His thoughts were echoed by urban planner with the Ministry of Public Works, Jihad Haidar, representing the Baalbeck-Hermel governor, who declared himself impressed and congratulated the community on its joint efforts.

The Deputy Mayor reflected further on the impact the creation of the park has had on his city. “It created jobs during the construction, has used – and boosted – Hermel’s artisans. Our carpenters, metalworkers, landscapers, and even concrete mixers have all contributed their skills during the park’s development”. Key to the design of both parks’ and their longevity is that they were designed to be maintained using local skills, and at low cost, as the years pass.

“It’s been a great experience to work across the whole community in Hermel and Arsal, as well as to engage with local craftsmen and workers, to create inclusive parks with enduring futures for the people of both cities, to be enjoyed by all sectors of the communities and by children of all abilities”, said UNICEF Lebanon’s Antoine Ghazaly who led both projects.

As 2019’s celebration of the 30th anniversary of the UN Convention of Child Rights draws to a close, with these two projects in Hermel and Arsal, the intervention of UNICEF and its partner NGOs offers a positive conclusion, and one on a high note of ensuring both communities’ children the right to inclusivity and to play. 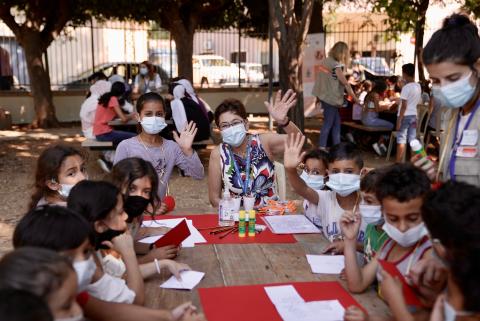 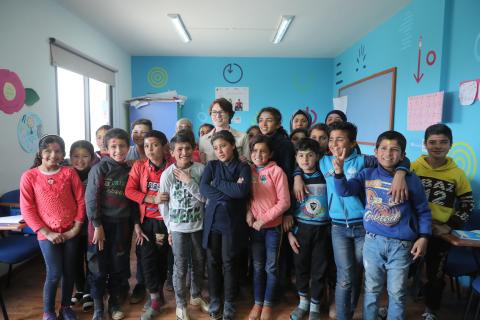 How do UNICEF and UK Government support education? 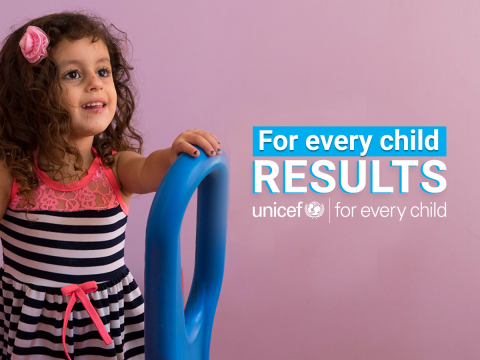 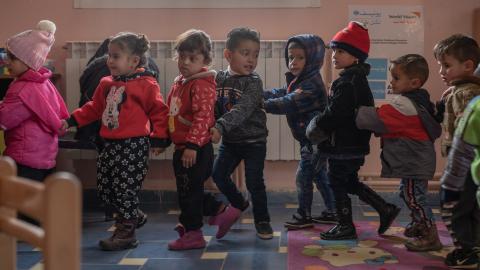 Four-year-old Fatima is no longer defined by her chromosomes