And gender equality, when?

Adolescents and young people in Latin America and the Caribbean demand equality.

SANTIAGO, Chile, 28 January 2020 - A few days after the XIV Regional Conference on Women in Latin America and the Caribbean (LAC), agencies of the United Nations System provided a space for Consultation of Adolescents and young people, in the occasion of the commemoration of the Beijing Platform of Action +25. This activity marks a global precedent, with LAC being the first region to contemplate adolescents as part of the regional consultation processes with young people. The results of this consultation will be presented in the Equality Generation Forums that will take place in Mexico during the month of May and in France towards the middle of the year, in the month of July.

In the Chilean capital and representing the entire region, more than 60 adolescents and young people belonging to civil society organizations that work for gender equality, the rights of girls, adolescents and women; reproductive sexual health, including the rights of LGBTI persons and HIV prevention, to contribute to the review process of the Beijing Platform for Action.

Floridalma López Atz, adolescent representative of the Guatemalan Parliament for Children and Adolescents, officially opened this event highlighting her commitment to the Youth Consultation: “We are spokespersons for many girls, adolescents, youth and women who are silenced or made invisible; we have been willing to contribute and act in the direction of an equal route. This space gives us an opportunity to build, share and devise actions that will lead us towards a more just world.”

María Noel Vaeza, Regional Director of UN Women, stressed that “it is the first time that a forum presents to the Regional Conference on Women the concerns, challenges and opportunities that adolescents and young people want to convey to the governments, a situation singular in which the public policy view is defined in relation to the gender issue.”

On the other hand, Mariella Mazzotti, director of the National Institute of Women (INMUJERES) of Uruguay and current president of the Board of Directors of the Regional Conference on Women, said that “the struggle for equality implies that in practice we live in equality of rights every day.”

For the UNAIDS Regional Director, César Núñez, the socio-political picture of Latin America and the Caribbean has changed in the last five years, suggesting a review through the lens of equality. “From UNAIDS we see in you, a youth that can lead that change we still need. The response to HIV is part of the 2030 Agenda and the Beijing +25 Platform for Action, and is an issue on which we still have deep challenges.”

As UNICEF Regional Gender Advisor, Shelly Abdool stressed that the future and the achievement of gender equality is in the hands of adolescents, which is why they have to be in the discussions and today’s decision-making. “We are at a critical moment for gender equality in the region. From UNICEF we are promoting intergenerational feminist dialogues to find solutions together with the voices of adolescents and young people. The girls’ agenda had so far been written without their participation. Now we have the possibility to change this process.”

Andrés Allán Osorio, Youth Specialist of the United Nations Population Fund, stressed that “many of the great mobilizations that have taken place in the region have been led by adolescents and young people, which creates a demand for us to guarantee and amplify the safe spaces for more adolescents and young people to be involved in decision-making and political participation spaces, with the support of the United Nations System.”

Shayanne Dena, from Belize, vice president of the Youth Advisory Group of the United Nations Population Fund, encouraged participants to persevere in the search for gender equality. “Don't let change intimidate you! You have control, take a stand, raise your voice and fight for what you believe in.”

The Regional Consultation of Adolescence and Youth towards Beijing +25 will emphasize the ways of bringing commitments to action, through the inclusion of the agenda of adolescents and youth in Latin America and the Caribbean for the advancement in the compliance with the Beijing Platform for Action, the 2030 Agenda and the Montevideo Strategy, ensuring that the voices, perspectives and leadership of adolescents and youth are included in the follow-up to the agendas to achieve gender equality.

The Consultation also has a digital component through which its scope is amplified, allowing greater participation of adolescents and young people, which will allow the results obtained through this digital platform, which pays for the face-to-face consultation, to be presented during the XIV Conference Regional on Women in Latin America and the Caribbean, the Global Forums of Beijing +25, as well as in the Generation Equality spaces. 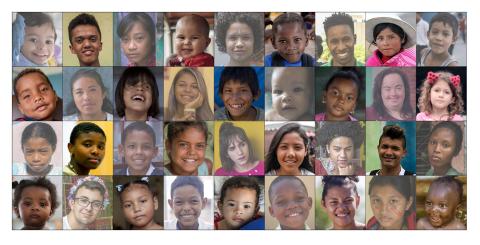 Enjoying the same rights is the best way to promote a life free of inequality, discrimination and violence for children in Latin America and the Caribbean 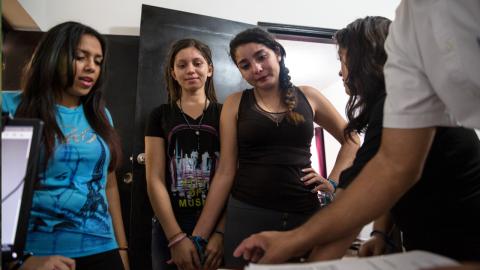 Toward the girls' empowerment in LAC

5 rights to enlight the path to girls' empowerment

Girls' Rights: Our voices for an equal future

We want to hear your voice

25 years of commitments to girls

International Day of the Girl 2020