Aibek is only 15 but has already outlived many challenges in his life. He is one of the 120,000 children left behind by migrating parents. But unlike others, who normally reside with their close relatives and guardians, he lives entirely on his own in Orozbekova, a small village in Batken region, in the south of the country.

Life has never been easy to Aibek. His parents divorced when he turned 10 and both left to Russia for work. Ever since then, he has been living on his own in the house left by his father, occasionally supported by his aunt who lives in a neighboring street. The life without parental care did not go unnoticed and he became closed, distanced himself from other people, felt anxious, frustrated and even frightened.

The COVID-19 crisis has put Aibek further at risk, including not being able to access education since he did not have a television at home and could not access remote learning during lockdown. This was the very moment when the Centre for the Development and Protection of Vulnerable Population, supported by UNICEF in the framework of the EU project “Protecting children affected by migration”, stepped in to help Aibek to secure his rights and overcome his difficulties. His status of child without parental care was finally identified in communication and cooperation with the Family and Child Support Department and adequate remedies were set in place.

“When I started working with Aibek, I could feel from the very beginning that he felt alone, uncertain and bewildered. It took me several calls for him to open up and start talking about his fears and the support he needs. My efforts have paid off and Aibek has started trusting me and relying on me. We have also just recently met in person  and  regularly talk over the phone. Through our support, Aibek has become more confident in himself and has learned to start trusting people.”

The project psychologists were trained to listen, offer support and counselling to children and adolescents like Aibek, help them overcome COVID-19 related grievances, better integrate into their communities, and have access to material and humanitarian assistance.  Moreover, the guardians and temporary caregivers were guided on ways of engaging with children left without parental care, recognize possible signs of depression, anxiety in children and were also advised to properly address such cases and build the right communication.

The project was also able to refer Aibek’s case to the District Department of Social Development to render him the needed help beyond the pandemic, including registration of official guardianship and access to all services. Notably, through the Regional Humanitarian Forum of NGOs, Aibek was also provided with a television to access remote learning.

“This case is a demonstration on how COVID-19 has exposed already vulnerable children to greater risks. In the case of children left behind by migrating parents, UNICEF will continue advocating for the creation of a guardianship model, that will enforce the registration of these children to secure that for each of them there will be a responsible and accountable adult.”

Recent trends indicate that the fight against COVID-19 in Kyrgyzstan is still far from being over. UNICEF, thanks to the support of the European Union, was already able to extend its much-needed support to more than 1,200 children to make sure that each one of them will have an accountable and responsible adult ready to stand up for them and protect their best interest. The project is currently working further with partners to reach more vulnerable children like Aibek that deserve to develop and thrive. For Aibek, his dream of becoming a chef and make a living by cooking delicious meals for his guests is now one step closer.

Name of the boy was changed in order to protect his privacy. 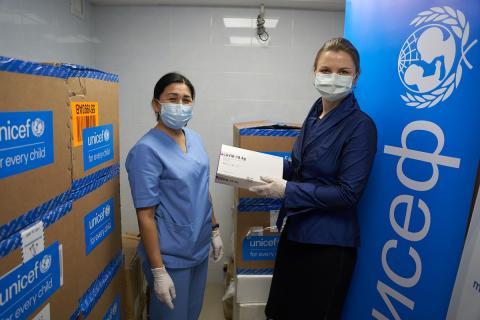