A man in his fifties opens the doors carefully. It is Zaim Donqi who welcomes us to the house of his four-member family in Dubrava, Ferizaj.

Since 2005, Donqi family is one of the foster families registered in the Municipality of Ferizaj, where many children without parental care have been welcomed and raised with diligence and love. Arlind* is one of them. He suffers from epilepsy and has developmental delays and has been in foster care at Zaim Donqi and his wife Remzije Mujolli for five years now. Arlind is in fifth grade, and as with many children, many things have changed for him as a result of the coronavirus pandemic and COVID - 19 disease.

A year ago, when the first cases of coronavirus infection appeared in Kosovo, the administrative measure of isolation was activated, and schools were closed. The teaching process moved online. But not all children had access to it. The numbers show that over 300 thousand children were left out of the learning process due to the lack of assistive technology, respectively laptops or iPads, which were needed in order to attend online learning.

Arlind was one of these children.

"We could not log in to either Google Classroom or Zoom because we did not have the necessary equipment", says the foster parent Zaimi, who could not afford to buy a technological device for Arlind."

"I could not afford to buy it, because even an old or used device costs at least 100 euros minimum, and I could not afford it. "I have been unemployed for a year now and I survive only with the help of my brothers living abroad [in the diaspora]", he confesses. He further tells that the fact that Arlind could not engage in online lessons like his classmates, had made him feel extremely bad.

"I saw that the boy was also feeling bad, he was being separated from other children. But when UNICEF and OFAP called me to get the gift, there was also a person dressed as Santa… I do not know how to describe that moment; the boy was very happy. He was telling all the children that now he also had a tablet. He is passionate about math and likes everything related to farming and is attending his lessons on the tablet. I am very grateful", says Zaim Donqi, unfolding further the bad moments when Arlind was not equal with others.

"My biological son has a sick son and when the municipality gave him a tablet, he [Arlind] started to complain why he did not get a tablet too. Then, at school they distributed tablets for the second time and again he was left without a tablet… For someone it is probably not much, but for us, this tablet has been a great help", he says.

14 children with disabilities living with foster families in 6 different municipalities, Gjilan, Gjakova, Ferizaj, Prishtina, Prizren, Kamenica and Malisheva, have been given tablets in order to be able to access the learning process as other children.

However, taking into account that many children living with disabilities do not attend school at all in Kosovo, for various reasons, there have been cases when the distributed tablets have served as a method of finding stimulation and play during isolation, both for children and foster parents.

Imrije Selmani, a foster mother living in the village of Dardania in Ferizaj, illustrates this. She has three children living with disabilities in her family and has been working as a foster mother for 16 years now.

"Isolation happened. We are used to entertaining children and spending time with them. To go out with them, taking them out for a walk. We could not do this because of the pandemic because there was a complete lockdown, and none of them could go to school because they have significant delays and the schools do not have appropriate conditions for them ", says the foster mother Imrije. "They are playing with tablets, we have found colorful video games and we got engaged together, the whole family, with children," she says.

“The international community should insist on the implementation of existing legislation that is aligned with the Convention on the Right of People with Disabilities. All partners should be more strategic in their spending (human and financial resources) in scaling up and sustaining of good practices for children with disabilities especially in adopting to a new normal at times of covid19. Distribution of tablets goes beyond its utilization for school, after school hours tablets brings families together, where they laugh, discuss around videos they watch. “ – said Murat Sahin, Head of UNICEF Kosovo Office.

“I am delighted we are supporting children with special needs in Kosovo with assistive technologies and the deployment of teaching assistants to facilitate their learning, to champion their rights, helping enable disabled children to reach their full potential”. – highlighted the Ambassador of UK to Kosovo, Mr. Nicholas Abbott.

The spread of COVID-19 has directly affected the lives of children and their families in Kosovo. The lack of a special grant for social services and emergency interventions, due to the small number of professional staff and social workers in Kosovo but also the lack of coordination between social, educational and health services has resulted in poor provision of social and protection services for children and families in need during the pandemic and beyond.

For Arlind, and his friends, access to tablet is access to the world thus all children with or without disability have the right to equal access to school, information and to other services.

* The child's true identity has been protected. 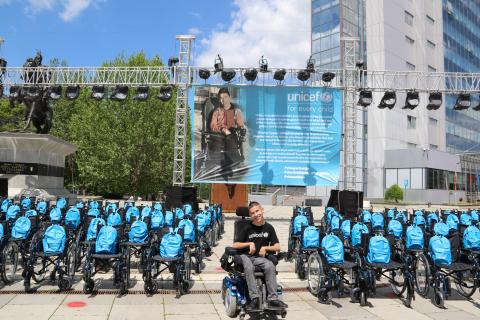 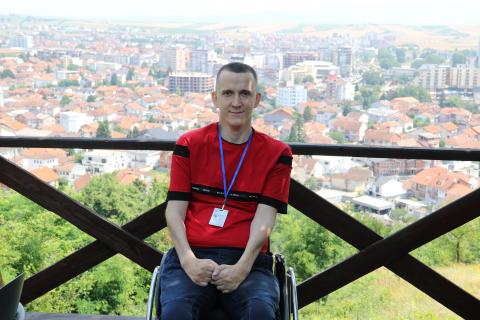 From isolation to a voice of change – meet Meriton Binakaj! 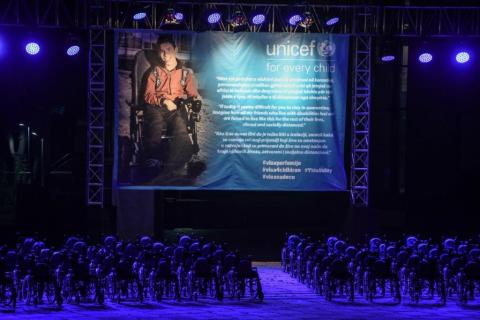 My birthday wish: I want you to come together with us! 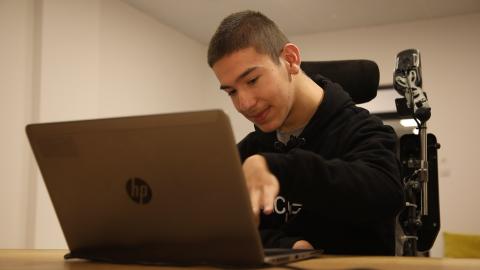 Assistants for children with disabilities in schools