The Government of Jordan renews its commitment to creating a positive and nurturing environment for all children to grow up in, children and youth take the stage at a National Summit and famous landmarks go blue as CRC turns 30

AMMAN, 20 November 2019 – The Government of Jordan has renewed its commitment to positive parenting in the Kingdom, so that all children can grow up safe and healthy, during a high-level meeting this World Children’s Day. The event, organized by NCFA and UNICEF, was followed by a National Summit where children and young people called for action to protect and promote child rights.

The UNICEF-NCFA high-level event and summit are part of celebrations marking World Children’s Day which coincides this year with the 30th anniversary of the adoption of the Convention on the Rights of the Child, the most widely ratified human rights treaty in history.

“Every child needs a safe and nurturing environment to grow up healthy and develop to their full potential,” said Tanya Chapuisat, Representative, UNICEF Jordan. “UNICEF is committed to working with the Government of Jordan to improve children’s well-being and future success, and support families with positive parenting techniques that can break the cycle of violence.”

At the High-level National Meeting for Parenting Programming, the Ministers of Education, Social Development, Health, Awqaf and Islamic Affairs, joined the Director of the Public Security Department, Ambassadors, youth representatives and UNICEF Jordan Representative Tanya Chapuisat to endorse the Plan of Action for institutionalization of the Parenting Programme as part of the National Strategy to End Violence Against Children in Jordan.

The Secretary-General of the National Council for Family Affairs, Dr. Mohammed Miqdadi, stressed that Jordan, under royal directives, has since 2000 implemented a participatory approach to protect children from violence and sexual abuse in order to have an integrated system for child protection.

Dr. Miqdadi stressed the importance of working on more than one side: “We must build the capacity of the cadres of the institutions that provide the service, especially for cases of violence against children, Additionally, we hope to mainstream the automation system in dealing with cases of domestic violence and violence against children, and that service providers are committed to both case detection, transformation or the application of case management methodology.”

World Children’s Day – celebrated on 20th November every year – aims to raise awareness about the rights of children and advocate for urgent action to close the gap for the most marginalized and vulnerable children.

“On the occasion of the 30th anniversary of the Convention on the Rights of the Child, we are hopeful that the Government of Jordan will pass the Childhood Law, to ensure every child, especially the poorest and most vulnerable, can realize their basic rights,” added Chapuisat.

In Jordan, 12 young people representing all parts of the country took the stage at the World Children’s’ Day National Summit, following nationwide consultations supported by the Ministry of Youth, to highlight the main issues facing their generation – from climate change to violence – and shared their solutions for a better world. UNICEF Jordan Child Champion, Joud Mubaideen, also spoke on behalf of all children in Jordan at the event, that included entertainment from the Mashrek School Choir, Omar Al Abdallat

In a symbolic stand for child rights, famous landmarks around the world will also turn blue. In Jordan the Ministry of Tourism has supported UNICEF by lighting up Petra, the Amman Citadel (including the Temple of Hercules and the Umayyad Palace) and the Roman Amphitheater – while other prominent locations in Amman, including the Jordanian Parliament, Abdoun Bridge and the Royal Hotel, have gone blue for child rights.

UNICEF is asking supporters to raise their voices in solidarity with the most disadvantaged and vulnerable children by helping ‘turn the world blue’ on 20 November. In Jordan, children and adults in Makani centres, schools, businesses and online (using the hashtag #WorldChildrensDay) are getting involved by going blue and learning about the Convention. 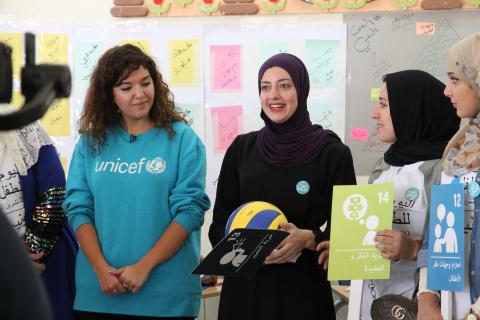 Youth in Jordan speak up 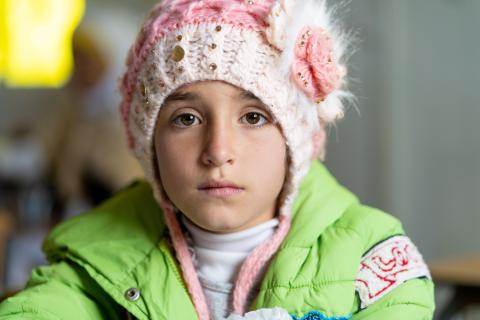 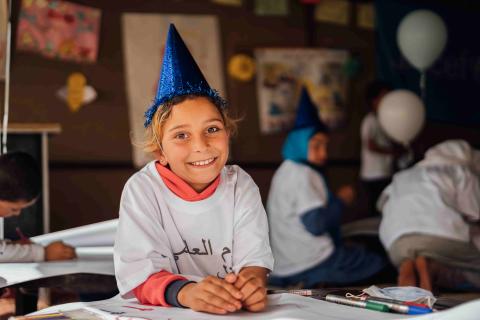 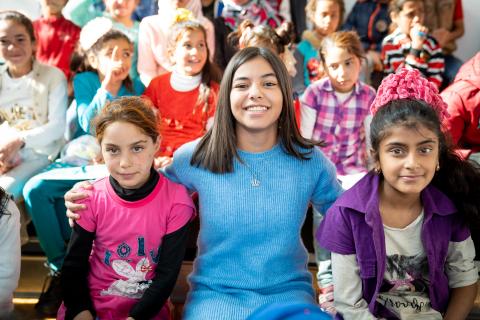