Trigger warning: this blog post touches upon issues including gun violence and suicidal ideation. If you need support at any stage, please scroll to the bottom to find out how you can chat with a U-Matter counsellor.

While reading It’s Not Ok To Feel Blue And Other Lies, a collection of mental health stories curated by British mental health activist Scarlett Curtis, I noticed that many of the stories were similar to mine. Yes, of course I can appreciate there are countless people in this world with stories like that, but it took me a very long time to accept that I even had a story to begin with, so I ask you to bear with me as I share it. I also noticed a pattern in some of the stories; and while doing research on Scarlett, I took note of her age.

A number that kept recurring in some of the stories was 15, and at the time of writing this article, Scarlett Curtis is 27. I will do my best to explain why those two numbers are important.

In her introduction, Scarlett shared that, “according to MQ…50% of mental health problems that adults experience are established before the age of fifteen”. One of the stories spoke of an event that happened to the writer 15 years ago, another writer mentioned having 15 surgeries and another shared that the writer had been in the field of Journalism for 15 years.

While I wouldn’t consider myself a particularly superstitious person, I do take note of patterns and it was interesting to me that this specific number kept recurring because it was at age when I experienced one of my life’s most traumatic events – something that I suppressed well into my young adulthood.

Heading home from school one day, the bus I was traveling in fell under heavy gunfire. Sadly, growing up in Jamaica I wasn’t a stranger to the sound of gunshots, but running for my life was definitely new. It was also the beginning of my relationship with anxiety, although I didn’t know that at the time. What I do know is there wasn’t much support offered to us as teenagers. Instead of support, the reaction of adults in our lives was to tell us that we shouldn’t have been on that bus in the first place.

Years later, while working on the launch of the U-Matter chatline that exists to support youth mental health, I came to truly understand how the lack of support triggered my mental health (and quite possibly others present on that bus).

Lack of support worsened the impact

The silence around the event led me to believe that this was not a big deal and since no lives were lost, this was simply punishment for being disobedient. I carried that teaching around with me for a long time, harming not just myself, but also people I would have interacted with in life.

Victim blaming like this remains an all-too-common experience for young Jamaicans. A seemingly throwaway comment like “if only you had just done this, then it wouldn’t have happened to you” compounds the hurt – and can lead to intrusive thoughts, self-harm and even suicidal ideations. According to a U-Report poll of youth conducted in 2018, 53 per cent had considered taking their own life. Data from the Ministry of Health and Wellness showed that 61 per cent of all suicide attempts treated at hospital were people under the age of 25. These numbers clearly show that our youth cannot navigate this life without support.

If you’ve read this far then I want to tell you that this lack of compassion for the victim invalidates their feelings, feeds stigma, and stops many from speaking up.

Since that day, several life changing things have happened to me but like many other people in this world (women and girls especially), I often suppressed the big feelings that they brought up because I was never really taught how to process my emotions when something bad happened. Instead, we are conditioned to accept that it is simply the way of the world, and we need to move on because life doesn’t stop. What happened, happened and after all, bad things happen to people every day. So why should my experience matter, right? No.

Scarlett’s age resonated with me because I was 27 when I decided to really take my mental wellness seriously. I had seen general practitioners trying to find out what was wrong but the result was always the same: excellent physical health. So then, why did I have chest pains? Why would I randomly experience shortness of breath? Why couldn’t I sleep? Why would my legs sometimes fail to hold me up? Why would I often kill the vibe when my mood changed?

For years my anxiety had been quietly (and sometimes not so quietly) manifesting in a physical way, and at 27 while working a full-time job, studying for a masters degree, learning about myself and trying to maintain relationships with people I cared about, I started to crumble. Not long after that, I was officially diagnosed with anxiety disorder and major depression and had to be medicated to function.

Trying to support the next generation

I was incredibly frustrated with myself. In my mind this was not the way my story was supposed to go. The more I tried to fight what was going on in my head, the worse I felt, and quite frankly, it was the first time in my entire life that I realised just how tired I was. I had been so fixated on the next thing, achieving the next goal or pleasing the next person that I never paused to acknowledge that I was not okay. Because I hadn’t been okay since I was 15.

It took a mental breakdown to make me question all this and learn about the experiences of so many others who seemingly had it all together living their best lives. I tried to focus more on understanding it instead of fighting, and eventually looked for ways I could help others. So, when I got the opportunity to work side-by-side with young people on the development and launch of the U-Matter chatline, it felt like a full circle moment: from my own lack of support growing up, to now helping to provide a new form of support for young Jamaicans.

With U-Matter, my story had become part of something bigger than myself, and I found myself learning from people much younger than me. Conducting research and focus groups and listening to youth explain their mental health journeys taught me to be gentle with myself, because I had to be gentle with them. I learned how to extend grace to myself which was something I had struggled with for a large part of my life. It was so instinctive to care for them because I couldn’t understand how these amazing young people were feeling such incredible pain. Then it dawned on me that I was once one of them and if I had received support, then probably I would have gotten healthy sooner.

While my time working on the U-Matter project as a consultant may have ended, I am looking forward to continuing to help others, which is why I signed up to be trained as a volunteer counsellor. Knowing my own story and the stories of others like me, I understand what it’s like to feel alone in the world and why it’s so important to #StartTheConversation – and that’s why I want to keep this cycle of support rolling.

The U-Matter mental health chatline is provided free by UNICEF’s U-Report messaging service for youth, connecting users aged mainly 16-24 to chat anonymously and confidentially with trained counsellors. To access, message the word SUPPORT to 876-838-4897 on WhatsApp or SMS (free for Flow users); or @ureportjamaica on Instagram or Facebook Messenger. Launched in partnership with the Ministry of Health and Wellness and the Caribbean Child Development Centre of the University of the West Indies, Open Campus, U-Matter was named in a vote among U-Report’s now 13,500-strong community in Jamaica. 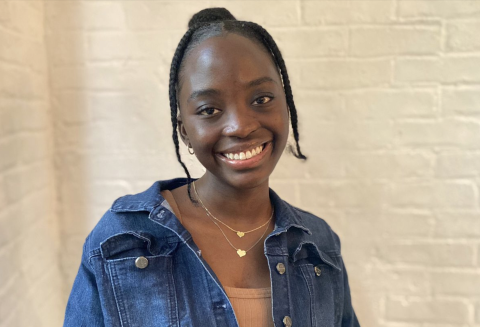 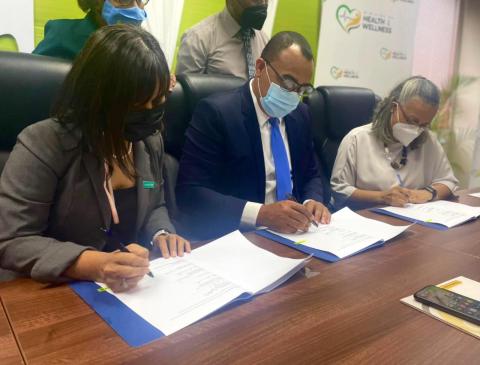 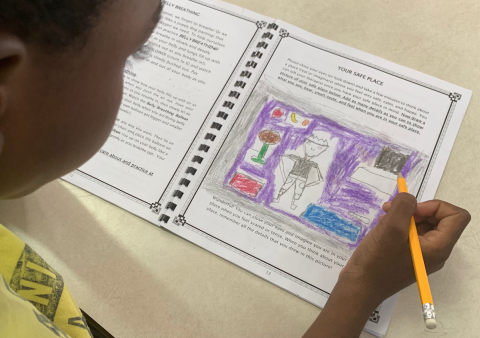 Helping children ‘Bounce Back’ from violence

We have just arrived at a classroom in Denham Town, Kingston when an excited boy runs outside.