Q and A with a frontline caseworker on Children issues

Al Anbar province is one of the largest provinces in Iraq and is located in the west of Baghdad. This province in the past ten years was a war zone and faced many security issues that affect families and their children. UNICEF Iraq and its partners were one of the first agencies which support rehabilitation schools, water factories, and others.

UNICEF counties supporting in the social workers & frontline worker who works with children on psychosocial support and GBV response and below we have the Q&A of two people who work in Human Appeal organization which is one of UNICEF partners that operate in Al Anbar.

Farah Uday, GPV caseworker, 26 years old. graduated as a chemist from education sciences college. She had been working with Human Appeal for the last six months and she answers us on:

Farah Uday, GPV caseworker, 26 years old. graduated as a chemist from education sciences college. She had been working with Human Appeal for the last six months. The GPV post opened first in Haditha city, I wanted t that time to know more about GPV because I didn’t know anything about it before, but I asked my friends and relatives and I did research and study on GPV on the internet than I apply for this post, and I get the job and I love my job so much. Before that I worked as a data entry in ICRC and then IMC I worked as a social worker and now a caseworker with the human appeal.

It makes me happy to support and help to reduce the violence against women and it’s a positive motivation for me. This work adds many things to my life … there were many things we didn’t know about people's life but when we go to the field and talk to them. I’ve learned a lot.

I wasn’t satisfied with my life in general and I was shy and don’t communicate with other people and I didn’t care about other people's issues. But when I knew how the other women live through my work…I became humbler and more started to love my life. And that even change in me how to deal better with my family and with other people. And because these changes helped to communicate and support my nearby neighbor, which I didn’t have any kind of relationship with them and I never communicate with them, I was encouraged to reach out to them and started with the relationship and started to visit them, and help them with their problems.

After the return of the families (they were IDP’s) to Ramadi, Anah City, many young girls drop the schooling because they didn’t go back to the same area they used to be before, they went to other areas which far from any school they might know. And, the poverty level is a factor that makes the families force their girls to drop schooling because they don’t have money for their transportation and educations.

I had a case which is affected me the most of two cousin girls 13 & 14 years old who dropped their school. We started an awareness campaign in their neighborhood on education how is important to youth and children, then I went to their mothers and fathers and started communicating with them about educations and schooling through multiple sessions. After a while, their fathers convinced to let them to go back to school, at the time the two girls return the schooling was online because of COVID-19. Also, they needed some legal support from our organization which is they don’t have any official ID’s, they lost it when they left their home and became IDPs, we support them by getting them new ID’s. All of that makes me feel happy and proud that I was able to help them.

Support people by continues providing them with psychosocial services which improve their behavior, that is one of the reasons that make me continue in my work. Also, when I help in providing support that protects the women and keeps them away from the circle of danger and violence.

Khalifa Hamoud Kahlifa, 35 years old, married and have three children, graduated from the college of art in 2008, answers us on the below questions:

I entered this field of organizations & NGO’ after the libations of the west of Anbar 2017-2018, I started with Afkar association in protection program, after that with TDH on mix program education and protection program, that I worked as monitor assessment with Islamic CV NGO. Nowadays in the last six months, I work west of Anbar in Anah & Rawah cities and the villages around it as a caseworker with a human appeal organization. Frankly after the armed operations in Anbar and liberation from the terrorist groups … we as a community witnessed many horrible things it will take me hours to talk about it. These bad security situations resulted from many children faced violence, joined armed groups and they are 10 years old or less which their future finished because of the temptations of these armed group, all of that generated a weak and fragile generation that need help and support. I saw the need to support these children and help them to go back to their life again especially I have some experience in psychosocial issues because I studied it college and I worked in it with Afkar NGO. And above all of that I love to help people and protect the children.

This work represents psychosocial relief, as a human being when you support a weak child who lost many things, like his family and safety or he is facing a huge problem or psychosocial exhausted, just you connect or communicating with this weak child try to support him or help him it will affect him so much. To be honest all of us have the childhood line in front of our eyes every day and affected us. So, imagine these children have many problems with their childhood how it will affect them in the future. So, when I interfere and help them it will change them to better people and support me with great & wonderful feelings.

One of the cases that touches me the most and its always in my mind the case of 12 years old child, she is physically sick, she looks like 4 years old, but she is 12 years old. She suffers from Hemolytic anemia, so she needs every week or ten days a blood transfer.

Through our visits to her neighborhood which had many children, I’ve noticed she doesn’t play with them, and when we asked her, she said physically she can’t, and she gets tired so quickly.

Through my talk t her she has many dreams and hopes, but she can’t blend in with other children. This frankly destroys me from the inside. As an organization, we provided her with psychosocial support and try to ask other children in her neighborhood to visit her and play with her, also give her some stationery to encourage her on learning and education, after a while, she felt better she became to love our visit as a team and interact with us and other children she felt safe and secure with us and with other children.

But unfortunately, we can’t provide her with medical aid because the whole Anbar province doesn’t have any specialized NGO in medical care or aid. And as you know most of the west of Anbar is under the line of poverty and most of the families there suffer from that and her family is one of them. Her father says to me that he can’t cover her medication expenses and he is suffering from that.

My love for this kind of work and my passion is the main reason to make continue in this work. I like to help and discover where is the need with the children, I like to help them as much as I can. Also, I love the system work in the NGO is a great one, from work sequences, organizing the duties from manager to team leader to the caseworker that give us flexibility & relaxation in the wok, and make us achieve more. 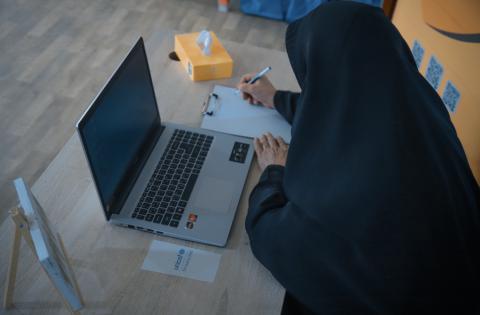 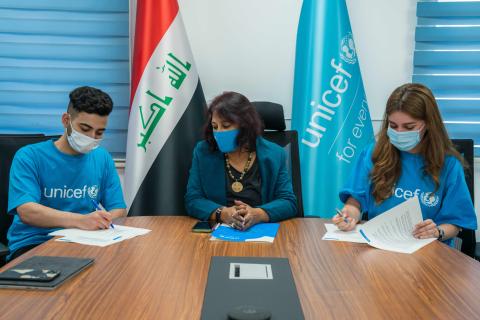