Reformatory directorate of Juvenile and women in Duhok

Earlier this month, a UNICEF team visited the Juvenile Reformatory Directorate in Duhok, where children between the ages of 9 and 18 who are either charged with a crime and waiting for trial or convicted and sentenced are being held. The Directorate is also where a large number of teenagers from Ninewa perceived to have an affiliation with armed groups were detained. During the conflict with ISIS, close to 250 juveniles were detained there. Today, the number has dropped to 60, thanks to UNICEF’s support to the juveniles with their legal processes, appearances in court, and rehabilitation and reintegration after their release.

There are different felonies for which a child can be charged and detained, including theft, killing, terrorism-related offenses, and the illegal border crossing into Iraq. The period of imprisonment depends on the type of felony committed. Whenever possible, UNICEF works to ensure that juveniles are diverted from the formal justice system, given an alternative to detention or receive the shorted possible sentences so that they able to stay with their families and in school. Thanks to UNICEF’s advocacy, the perception of the children has evolved from thinking of them as common criminals who should be punished to seeing them as victims who need services and support. As a result, more and more children are being taken out of the formal justice system and given alternatives to detention, shorter sentences, and early release on probation.

UNICEF also provided training to social workers who monitor the juveniles while they are in detention, as required by Iraqi law. The social workers help them build the livelihood skills needed for their rehabilitation and reintegration, and they continue to counsel them while when they leave the reformatory and are on probation. Moreover, for the children who have gone through trial and are serving their sentence, there is a school on site and vocational training in IT, hairdressing, and repair and maintenance of air conditioners.

19-year old Hassan participates in an IT course every afternoon and is already preparing for life after the reformatory.

I hope to have a barbershop when I leave. I want to be creative and do new hairstyles for people in town

There is also a library, a swimming pool and a playground with football and basketball courts on site.

UNICEF is supporting this programme thanks to generous funding from ECHO. 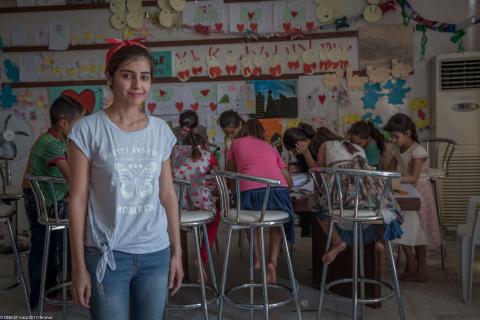 A baby dies in Baghdad attacks