Tuqa AlBakri and Mujtaba Alshawi have been respectively appointed as UNICEF Iraq’s Early Childhood Development and Climate Change Youth Advocates. World Children´s Day will be marked by turning blue key monuments in Iraq, along with messages of commitment 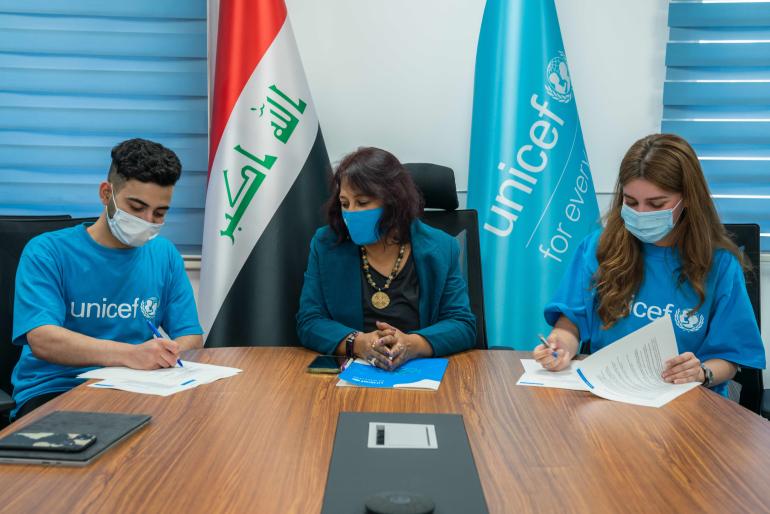 In the appointment ceremony, Tuqa and Mujtaba signed their appointment with Sheema SenGupta, UNICEF Representative in Iraq. Both young people will advance two key UNICEF priorities, early childhood development and climate justice, by mobilizing and supporting other young people working and advocating for these issues.

“The appointment of Tuqa and Mujtaba is another step forward in raising young people’s voices on key priorities for children and young people of Iraq which require immediate action, in line with UNICEF’s commitment to promoting meaningful participation of young people in Iraq,” said SenGupta. “The latest UNICEF report on extreme heatwaves and temperatures for Iraq in coming years confirms the urgent need for climate action today. In addition, new generations need stronger early childhood programmes to develop and thrive – we must not forget, early years are the most important in the life of a child!”

“On UNICEF’s Global Day of Action for children and young people, we much appreciate the efforts of the Iraqi Government towards achieving the Sustainable Development Goals,” said SenGupta.  “UNICEF remains committed to supporting the Government to realize the rights of every child in the country.”

Tuqa, 20 years old, is a medical technology student in a university in Baghdad. Actively working as a member of the UNICEF-supported Young People Advisory Group since April 2021, she is a passionate advocate for child rights, especially the rights of the youngest children.

“I am honored to be appointed as Early Childhood Development Youth Advocate especially marking World Children’s Day,” says Tuqa. “This appointment provides me with the opportunity to advance the rights of younger children, whose voices remain unheard.”

Mujtaba, 20 years old, is a dental school student in Misan University. As a member of the Young People’s Advisory Group, he has been advocating for climate action and the environment at national and international levels. In September 2022, Mujtaba represented Iraq’s youth at the United Nations General Assembly, where he met with senior officials including UNICEF Executive Director, Catherine Russell, and Special Adviser to the United Nations Secretary-General on Climate Action and Just Transition, Selwin Hart and called for climate justice for young people in Iraq.

“Today’s appointment provides me with a greater opportunity to raise the voices of Iraqi youth around climate action and justice,” said Mujtaba. “By delivering on climate change commitments and climate adaptation, we can make communities more resilient and ensure a more advanced and sustainable future for every child and young person in Iraq.”

On World Children’s Day, UNICEF is also marking the day in Baghdad by turning blue the Al-Tahrir Square and Save the Culture Statue in Baghdad; children taking over for a day the key positions in Iraq, such as Toyota CEO, and with social media messages from key influencers, such as the captain of the national football team, Ali Adnan, to reimagine a better future for children.

World Children’s Day commemorations organized by UNICEF will conclude with an event on November 21 in Baghdad, in coordination with the Child Welfare Commission, to highlight children’s success stories and stress the importance of the Early Childhood Development Strategy.

UNICEF seizes World Children’s Day, as an opportunity, to remind the Government of Iraq of its obligations under the Convention on the Rights of the Child, which Iraq ratified on June 1994.

Notes to editors: Biography can be found here, and multimedia materials available here

Across the world, UNICEF works with young activists, advocates, and community organizers engaged in transforming their societies. Since 2018, each World Children’s Day, UNICEF has been highlighting the appointments of young people who have distinguished themselves as UNICEF Youth Advocates; however, our engagement with young changemakers is broader.

Young people are the most effective champions for the issues that impact them, and they have a unique power to galvanize their peers around issues they are passionate about. 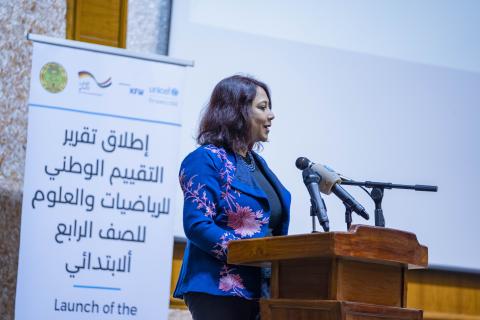 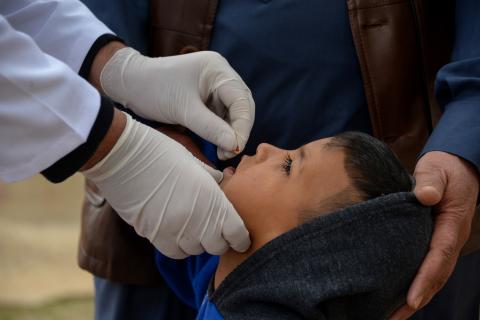 UNICEF and WHO supported the national multi-antigen campaign for more than 400,000 children. 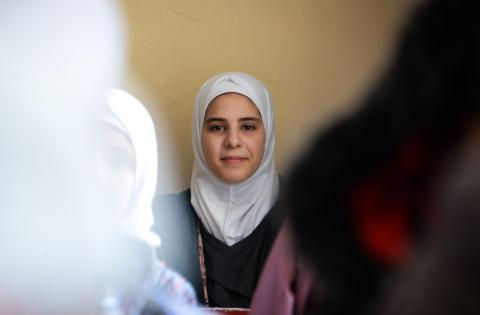 On International Day of Education, Ghazal is one step closer to fulfill her dreams thanks to education 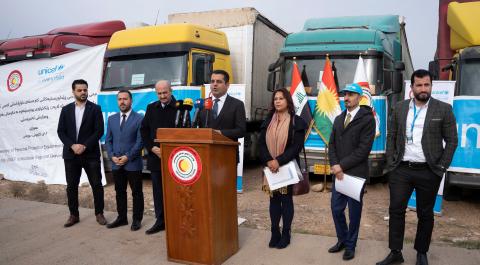 UNICEF donates personal protective equipment worth over $2.5 million to the Ministry of Health of the KRI