Talking with Apps Against Ebola

Collaborating with the local tech community in Liberia

Yesterday I Skyped with the two guys behind Apps Against Ebola.   They were cool. I stand by my original post (with one apology for rhetoric, which you’ll see below) .

If you are just joining this conversation, Apps Against Ebola was referenced in my blog post from two days ago, where I proposed 10 questions to answer for anyone doing projects which involve sending smartphones to West Africa.  At the moment, this is the Vulcan Foundation (8,000 phones) and the Apps for Ebola guys (1,000 phones).

I wrote the post because those 10 questions are important, and because the internet is amazing in how it lets us open up a space for conversation.  The Jouberts (Apps Against Ebola) and Vulcan Inc both responded on Twitter, and wanted to chat.  How cool is that? Very.  So, starting with the 1,000 phones – hopefully I’ll talk with Vulcan later this week.

Here’s the TL;dr:  I think Malan and Phillip would have a great time in Liberia – and could do a lot on the ground, collaborating with the local tech community.  I suggested this in our call. This project should still answer the 10 questions posed in the original article. So should the Vulcan one.

First of all, the Jouberts correctly called me to task, and gave me something to apologize for. It was wrong to begin my last article with a paragraph saying “I would rather dump the phones in the ocean than on west Africa.” This was a bombastic and not-helpful way to begin – because it just gets everyone’s hackles up.   I stand by the basic sentiment, but I could have been a bit more constructive on the language.

Note: I have run this post by the Jouberts, and included their inputs.  They have asked me to include this quote from them: “We have been developing the Ebola Care app hand-in-hand with aid organizations like More Than Me in Liberia. Our goal is specifically to help the smaller local organizations, those will be staying long after the Ebola crisis is over and who are usually working on very limited resources.”

First, some facts. Here is how their project is set up:

1) There is a platform that the Jouberts have created, called Journey, which is proprietary, for creating mobile phone apps.

2) They have been talking (remotely) with groups in Liberia – small NGOs, etc. – to establish needs.

3) They are testing with around 40 aid workers –  and continuously making changes based on feedback. And based on those needs, are creating apps on their platform (#1).

5) Which will go to Liberia and Siera Leone, with the apps on them.

This is where things stand. The Jouberts honestly want to help. This article outlines an approach they could take, if they wanted to ensure their solution is really useful and can integrate into the work of others.

1) This is an opportunity to make new friends and networks

Emergencies like this give us a huge opportunity to work with smart, dedicated, and awesome people to create solutions that otherwise wouldn’t exist. Phillip and Malan’s dedication and smarts represent even more of a global talent pool which we can harness to create really groundbreaking answers to problems.

As with RapidFTR (a solution we developed out of an NYU Design for UNICEF Class, with Thoughtworks, around the Haiti earthquake) these solutions may not always be –for this emergency- but may end up being things that are a global good afterward.

2) Programmes and data need to connect

The guys said, early in the call, that they weren’t trying to create the cathedral – rather the bazaar – they were trying to work quickly to build up some apps and solutions for NGOs in need – and wanted to be able to work fast on that angle.

This is a good sentiment, but it isn’t enough in an emergency.

I said that it was vital that
1) these systems be built with major actors on the ground – entrepreneurs, the extremely capable government folks working on innovation, and others and
2) that the systems had to be able to connect to each other on the data side.

2.1) Why should these be built with people on the ground?
Because there are already a ton of people working on real solutions in Liberia – everyone from iLab (who is local) to eHealth Africa (from Nigeria, but with teams in Liberia) are building out really smart apps and ecosystems with the government, and with mobile network operators, to solve problems. It is much better to be additive to their efforts than to create other parallel solutions.   There is already enough spread and diffraction of projects and ideas. We need solutions to come together, rather than pull apart.

2.2) Why should systems connect.
Rather than build a system which works for NGO-with-5-people-here in one way, and Group-with-10-people-here in another – and where the databases don’t connect – systems should provide data to common sources. When I was talking with folks in the Government of Liberia over the last month, one of the biggest concerns is fragmentation of data – and in a country where good realtime data is so hard to come by, the groups that the Jourberts want to work with should be gathering data that supports the national effort to identify and address new cases of Ebola.

There is also a real mandate to work with the government around health data – this is sensitive (and often national) data – and while it can seem overly heavy and slow to go this route, it’s the only way to make sure data solutions actually have update in the larger ecosystem over time. 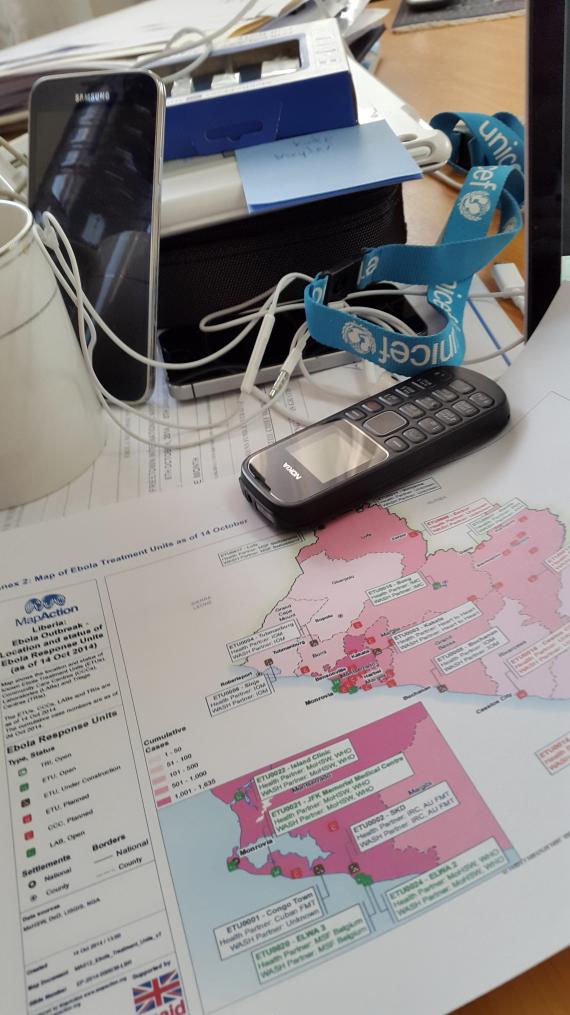 2.2) Why should systems connect.
Rather than build a system which works for NGO-with-5-people-here in one way, and Group-with-10-people-here in another – and where the databases don’t connect – systems should provide data to common sources. When I was talking with folks in the Government of Liberia over the last month, one of the biggest concerns is fragmentation of data – and in a country where good realtime data is so hard to come by, the groups that the Jourberts want to work with should be gathering data that supports the national effort to identify and address new cases of Ebola.

There is also a real mandate to work with the government around health data – this is sensitive (and often national) data – and while it can seem overly heavy and slow to go this route, it’s the only way to make sure data solutions actually have update in the larger ecosystem over time.

3) This has to be open source

The solution being proposed now is not open source. It’s built off the Joubert’s Journey platform. But I am 100% sure that before you put something into an emergency there should be a plan, with specific dates, for the entire codebase to be documented and publicly available under an unrestrictive opensource license (AGPL, BSD, etc.) on Github.

The Jouberts had some good questions about this: why is it necessary…and doesn’t it stifle local entrepreneurship. My responses were that 1) it is necessary, and 2) it doesn’t have to stifle anything.

3.1) It doesn’t matter if it seems like there’s no business plan, the software must be open
In an emergency, you need to be able to quickly adapt and change the technology you’re working with – we’re having this issue now with a project in Liberia, where requirements are changing so quickly that if we weren’t totally open, we’d be totally sunk.   In an emergency you also need to be adding to a greater whole, rather than creating great, but smaller, parts – even if it’s harder to do.

There are so many smart people working on this issue now in Liberia – and the Government of Liberia has specifically requested open source technology. Why not listen to them?

3.2) Open source business plans are possible, but that’s another discussion

I also said that it is possible to have companies created, in West Africa, with open-source models, that make money – and those are discussions I would love to have, but this is not the context or time for them. An open area for discussion and thought.

My recommendations were/are
1) Go to Liberia. The Jouberts can meet with our team there, and with the other super smart people doing stuff in the country. This will give context and also grounding. This will also help inform decisions like what kind of hardware is necessary, if any at all – and who needs it, at what point.

2) Make it aggressively, 100% open source. Or work, instead, with a solution stack (like ODK/ formhub) which is already open, if they don’t want to open their platform. If they don’t do this, I wouldn’t recommend going forward.

3) Make a budget for training costs for users, and deployment. The technology in these types of projects is usually 5% of the cost – so 1000 phones (at …what’s a Fire cost – ok Google says 99 bucks – so a total cost of 100,000$ of tech…) means that the training and implementation costs (if that’s 5% of them) could be around 2M$. That is consistent with what we have seen – and it seems like a lot, but it includes travel, trainings, maintenance and repair, updates, and all the work with Mobile Network Operators that you’ll need to do.

4) Keep being awesome and open. These are great guys, and they really want to help. I hope we can work with, and learn from, each other in ways that push forward collaborative, open, and useful solutions to this pressing global crisis. 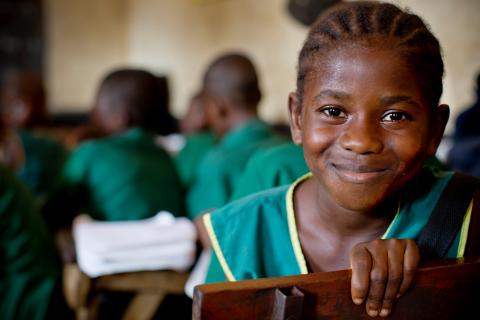 We needed to come up with a solution that was robust and easy to deploy, one which would allow us to quickly monitor schools. 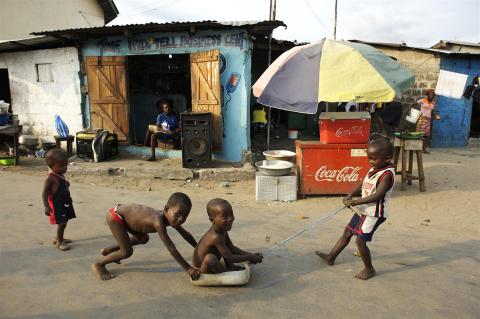 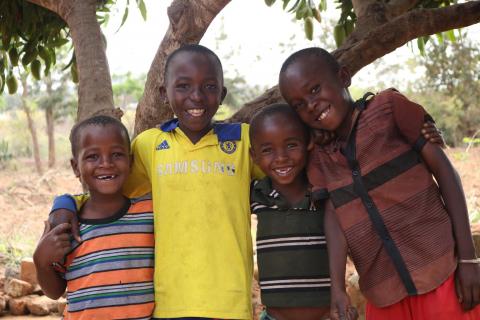 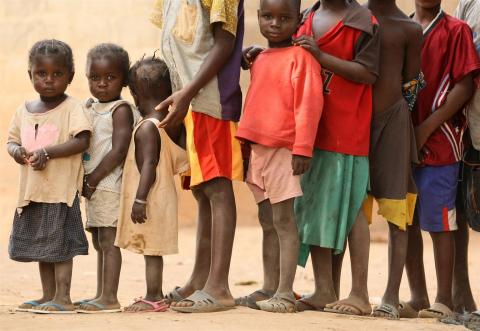