Co-Design Workshop for Children in the Age of Haze

Jakarta: When Indonesia’s yearly agricultural fires start up each fall, belching acrid haze through Borneo, Sumatra and over borders, the air one breathe, turns into a health hazard: Schools shut down, thousands fall ill, and some will die from respiratory ailments.

Few dispute that haze is deadly, but solutions have been slow in coming, leaving millions of (mostly) rural Indonesians exposed to harm. Indeed, despite land and forest burning laws passed following the 2015 El Niño-powered haze (an event that one study says may have caused 100,000 premature deaths), haze returned in 2016. There is a clear need for new ideas.

Last month, a group of 30 designers, tech creatives, developmentalists and marketing experts convened in Jakarta to take a fresh look at this problem. Organised by PulseLab Jakarta in partnership with UNICEF and Reality Check Approach (RCA), the co-design workshop looked at ways to protect children. As the first step in a months-long journey, it forms part of UNICEF Indonesia’s commitment to risk reduction in an age of accelerating natural and human-induced disasters.

“From an innovations standpoint, the value of all of these people from different sectors coming together in one room is that there are different approaches to the same issue.

It forces us from the United Nations to break out of our mindset and consider other angles.”

A philosophy of ‘human-centred design’, which places the experiences of those being designed for at the heart of the design process, animated each phase of the workshop — from research to brainstorming to prototyping.

Achieving such proximity from Jakarta, however, required some creative approaches: first, digital stories developed by young people and parents in Riau and West Kalimantan (traditionally two of the hardest-hit provinces) were screened by RCA. A trove of maps, first-hand anecdotes, photographs and other material functioned as additional stimuli, while carefully prepped actors were hired to pose as experts and victims to be interviewed. Though their true identities were hidden from participants, their testimonies were based on real recordings and interviews.

It all added up to a relatively unfiltered glimpse of life in the age of haze.

“These methods served to jump-start the brainstorming process by triggering empathy, thus making it more connected to the experiences of real individuals.

The idea was to spark creativity with a clearer vision of what might work most effectively and efficiently.”

Participants found that haze’s harms go beyond respiratory illness and early death and include things like impaired cognitive development and loss of education; counterintuitively, when schools are forced to close due to haze, children are often more at risk of exposure, as they end up spending extra time outdoors. Many of the teams explored this paradox in depth in the brainstorming.

In keeping with a ‘human-centred design’ approach, however, participants were asked to go a step further and anticipate the ecosystem within which their project would function. In other words, to think hard about the socio-environmental factors that might limit its efficacy, and to plan for them. 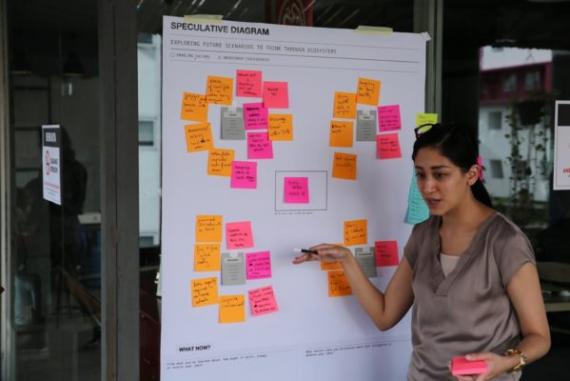 “For instance, while an open-sourced online information platform for youth might be an ideal solution to answer the gap in data provision for haze-affected residents,” PulseLab Jakarta notes, “a few factors might inhibit the effective implementation of such a platform — think access to technology, data literacy, and lack of validation process.” Complimentary initiatives like strategically-located offline information thus become essential to the overall project.

Eventually, each of the six teams settled on a single prototype, later modeled in miniature using materials like cardboard and Styrofoam – “simple materials so that the participants would focus more on the idea than the aesthetics,” PulseLab Jakarta design lead Kautsar Anggakara explained.

Several design teams seized upon new learning systems/spaces as a means of protecting children from haze and keeping them in school.

“We’ve put together a ‘backup system’ we’re calling community-based, collective distance learning,” said Saras, a designer, whose idea calls for a digital library of mobile-accessible lessons students can use at home during haze. “But to make it optimal, we would need to find ways to ensure homes are haze-free, too,” she said.

According to JP, an innovations specialist with a Hong Kong-based environmental solutions firm, “there are no silver bullets” when it comes to protecting children from haze. His prototype, ‘Keliling Fantasi’ — a roving learning classroom during haze and a resource centre during the fire-free wet season — would foreground environmental education, not the national curriculum. Funding would thus most likely have to come from the private sector, he said.

In the months ahead, UNICEF is looking forward to seeing the prototypes refined through a series of workshops with a broad range of stakeholders, “to ensure that the ideas and insights evolve from creative concepts to real action for change,” said Richard. “Some of the prototypes show promise to attract interest, we aim to support stakeholders to fund, pilot and scale-up in one or two affected areas.”

“Earning buy-in from community leaders and enlisting youth participation – these will be key challenges to a successful pilot,” added Valerie. The co-design concept might itself be tested in affected areas. “We are looking forward to launching a similar youth-led process like this in Central Kalimantan, or maybe Riau,” she said. “A co-design workshop could be really effective at encouraging youth to become the agents of change.”

“When youth become an active part of the solution — that’s when you get big potential for change." 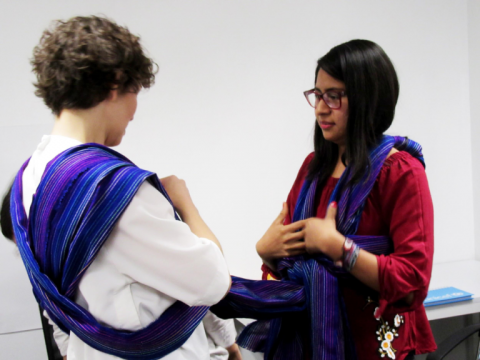 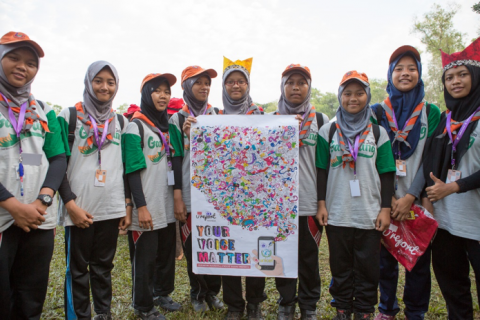 Indonesian Scouts Speak Up Through U-Report 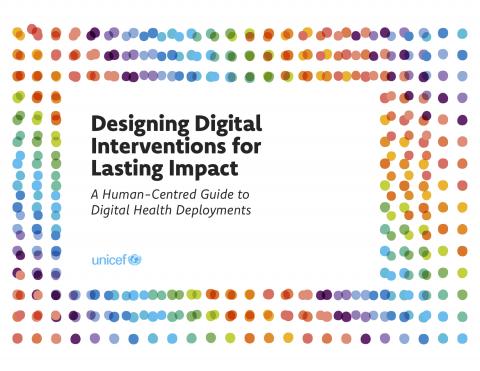 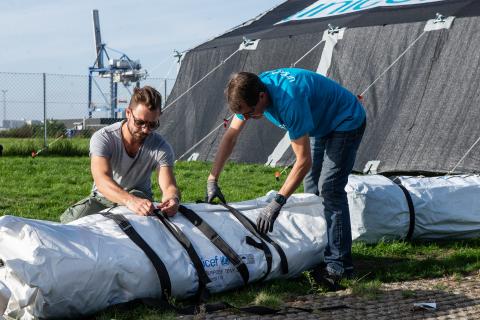