Freeing Villages from Open Defecation, One Latrine at A Time

In the middle of a palm oil plantation in Keuda Panga village stands a modest house made of unpainted cement and wooden walls. A few steps away is a recently installed latrine with a well next to it, covered by a blue plastic tarpaulin which is supported by bamboo and tree trunks.

This is the second house of Zainal Abidin, which he built after his first house was wiped away in the 2004 tsunami that killed his wife and children, along with over 200,000 people in Indonesia’s western-most province of Aceh.

Zainal has since started a new family. But 2019 brought news that renewed his fears of losing another one of his children, when he learned that his son was diagnosed with thalassemia, an inherited blood disorder caused by insufficient haemoglobin. The diagnosis not only concerned Zainal’s family, but also health workers from the nearby Panga Puskesmas (health centre) who had spent years trying to convince Zainal to build a latrine in hopes of preventing health problems resulting from open defecation.

Like many others in Aceh, Zainal and his family had often been defecating in the open by digging up the soil in the surrounding plantation and then using a shovel to bury their faeces. Almost half of the province’s households in the lowest 40 percentile do not have access to improved sanitation. As a result, widespread open defecation puts communities, especially children, in danger of deadly faecal-oral diseases like diarrhoea, which remains one of Aceh’s main causes of child mortality. It has also been linked to childhood stunting.

Zulfikar, Head of Environmental Health at the Aceh Jaya Health Office, says that stopping open defecation in villages is far from an easy task given how it entrenched it is with local customs. Even some households who can afford to build their own latrine detest the idea of connecting their house to one.

In a bid to free villages from open defecation and reduce child malnutrition, UNICEF worked with local partners from 2019 to 2020 to train health workers and community volunteers in Aceh Jaya and three other districts on the community-based total sanitation-stunting (STBM-Stunting) approach. During these activities, trained health workers and volunteers helped villagers understand the negative impact of open defecation on health, often linking this to Islamic teachings and other means to “trigger” behaviour change. Following these activities, workers and volunteers would later visit the villagers’ houses again to see whether they had stopped defecating in the open and built their own latrines.

Among those trained was Sakdiah, a health worker at Puskesmas Panga who visited Zainal’s house several times to educate him about the dangers of open defecation, despite multiple rejections. Thanks to her and her colleagues' persistent efforts, they were able to convince him to change his mind after informing him of the health risks for his son after his diagnosis. She continues this work in other villages, where some families still refuse to change their behaviour.

“Zainal’s family was the last one to openly defecate in Keuda Panga. The village has since been declared ODF (Open Defecation Free),” Sakdiah said, referring to the series of steps that authorities take to declare that a village is free from open defecation.

Active participation of villages and communities, she explains, has greatly helped in changing people’s behaviours, especially when financial constraints were a major hindrance. Some villages in Aceh Jaya initiated the Saweran Jamban (Latrine Crowdfunding) programme in which the communities contribute materials used to build the latrines. Baitul Mal Aceh, an Islamic alms body, has also provided dozens of latrines to the poor while village funds have been allocated to build latrines for residents.

For Zainal, his family’s new latrine has given him a greater sense of pride and hope for his son’s future. “Now, what is important is that we have a latrine. I felt bad before when our guests needed to defecate,” Zainal said. “And my son’s health has also been improving.” 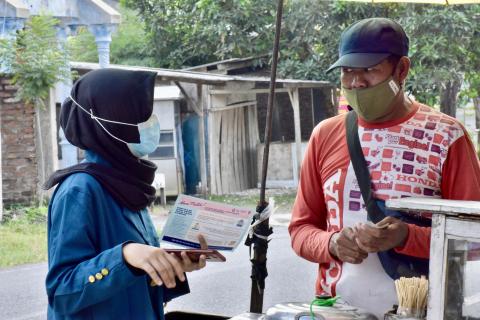 Landmark Meeting Urges Prioritization of Water and Sanitation to get Health, Climate and Economic Targets Back on Track 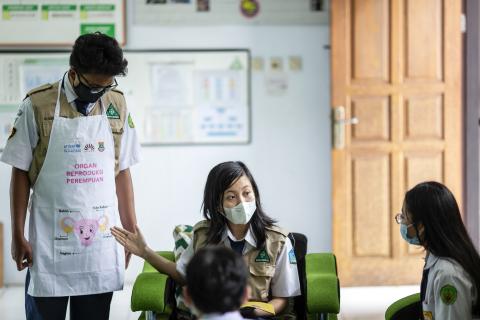