In East Lombok alone, there were 1,692 cases of pneumonia in children under 5 in 2018 (Health Office Data), with 30 deaths. And that’s only the number for those who went to a health care facility.

On January 2020, we visited the island of Lombok to see the children affected by pneumonia.

“He’s seven months old now. He’s been admitted three times for pneumonia. The last time was a few weeks ago,” said Baiq Yuliati. Her son, Septian Alfaqih looked content in her arm, a smile between his chubby cheeks.

Septian was born prematurely, with a low birth weight of 1,4kg. He now weighs 5,9kg. Looking at him, you wouldn’t guess he’s been battling multiple bouts of pneumonia. We met him at a Health Centre in East Lombok, West Nusa Tenggara. The last time he had pneumonia, he had to stay at the health centre for 3 days.

Lombok is one of Indonesia’s most beautiful islands. Surrounded by white sandy beaches, mountain ranges, and bright blue sky from anywhere you stand. It looks like a slice of heaven.

But when we visited Septian at his house, his surrounding environment is far from the Lombok of postcards. His house, recently rebuilt after the 2018 earthquake, is sandwiched between two tobacco curing facilities, with a cow shed at the back. These facilities only operate three to four months a year, during the dry season. When operating, they’re on for 24 hours a day, 7 days a week. Even adults are heavily affected by the smoke coming out of these facilities.

Nabila is a one-and-a-half-year-old girl in Sembung, West Lombok. Mubai, Nabila’s mother collects garbage from a nearby landfill for a living, her dad herds cows. With no one around in the day to watch Nabila, Mubai used to bring her to the landfill. There is no facility for children, nor are masks provided. Since Nabila caught pneumonia, Mubai doesn’t bring her to the landfill anymore, but this means she has to wait for her husband to get home before she can go to work.

Nabila was born not long after the 2018 earthquake that shook Lombok. During this time, their house was destroyed, and they were living in the cow shed behind the house. The house was finally rebuilt recently, after the government funding distribution.

Nabila lives not too far from the health facility, and her parents usually take her there when she’s sick.

We met 9-month old Iqbal accidentally at the Narmada Health Centre in West Lombok. He was there with his parents to see the doctor, and we saw him at the Integrated Management of Childhood Illness (IMCI). He’s been coughing for a couple of days, which according to Ely, his mom, was unusual. The nurse at the health center did a routine check on him, using the IMCI tools and measured his breathing. He was then diagnosed with pneumonia.

We talked to the nurse, Yulia Arianti,  who did the check up on Iqbal. Yulia was one of the health workers who joined a training supported by UNICEF for Integrated Management for Childhood Illness in West Nusa Tenggara.

Both doctor and nurse suggested Iqbal to be admitted at the health centre, but due to time constraints and the fact that his parents had another child to look after at home, he couldn’t.

Zahwa is 13 months old. She was admitted at the Tarare Health Centre in East Lombok for pneumonia a while ago. According to her mother, Harna Isnawati, coughing is not rare in the family. We visited their home, and found out there are several brick and tile burning facilities in the neighbourhood. In fact Zahwa’s house shares a yard with one.

We met all these children at the health centres, and talked to the people treating them. UNICEF has been supporting the Government of West Nusa Tenggara in ensuring child health and well-being, including support during the last earthquake disaster. These cover support to improve child care in health facilities both for major childhood illnesses and nutrition, immunization program management and access and utilization of safe water and sanitation both in the community and at school. Currently, with UNICEF’s support, the local government is improving care-seeking behavior for major childhood illnesses and strengthening family monitoring for newborns with additional tools MNCH (Maternal, Newborn, and Child Health) book.

“Acute Respiratory Infection is still the number one disease in our province.”

Nurhandini Eskadewi, Head of West Nusa Tenggara Health Office explained. According to PISPK* data, around 63% of the population in West Nusa Tenggara are smokers. “The government has several efforts to address pneumonia. Compared to 20 ago, cases are much fewer now. This is due to a number of evidence-based approaches we’ve done and are currently doing. One of them is immunization. Since 2017, starting with East and West Lombok, we give children the pneumococcal vaccine. In 5 to 10 years we can check how much this contributes to the decrease in pneumonia,” she explained.

Septian, Nabila, Zahwa and their friends all face serious health issues, and all have the right to survive and thrive. And it is not without hope. The widening of Universal Health Care, introduction of pneumococcal vaccines, reducing child wasting and stunting, and the improvement of access to water and sanitation are some of the key issues to focus on to combat pneumonia. Together, we can make it happen and ensure that no child is left behind. 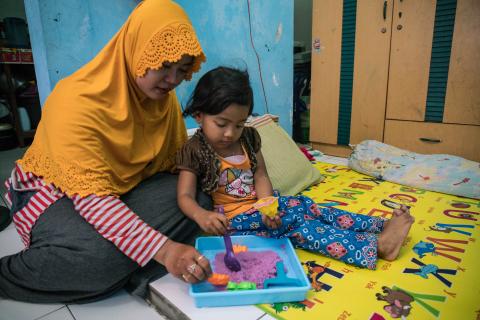 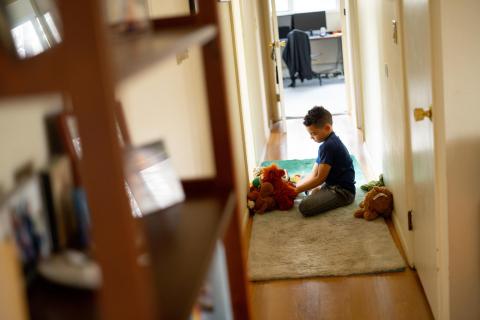 Parenting tips during the coronavirus (COVID-19) outbreak
UNICEF teamed up with the Parenting for Lifelong Health initiative to bring parents a set of handy tips to help manage this new (temporary) normal.
Read the story 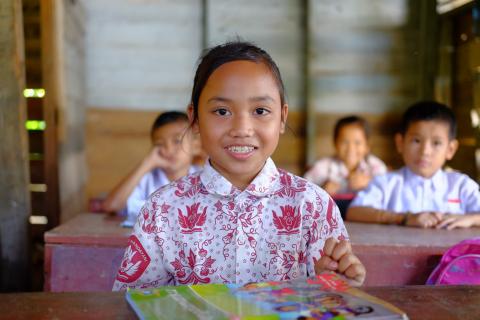 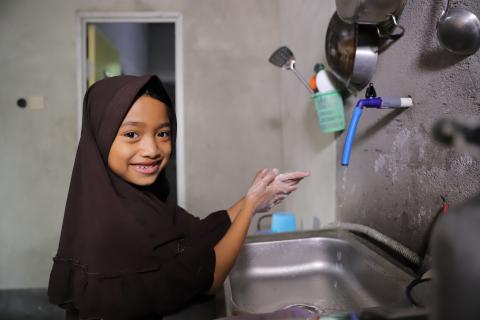