As September approaches on the island of Madura, the leaves begin to fall, the grass dries up and the dust scatters in the wind. The arid soil and scant rainfall make the heat of the dry season feel even more oppressive.

Amid the unfriendly weather, Alfiatun, a middle-aged woman, shows up at a small mosque in Kalianget, Sumenep — one of four districts on the island — to deliver a sermon on parenting in Islam and the importance of immunization for children for a weekly religious gathering. Clad in a bright green veil and batik dress, she speaks with a soft but commanding voice that gets the attention of the congregation.

"Immunization is good, healthy and saves our children!" proclaims the single mother of four with confidence to the dozens of families in attendance.

Aunties are the key

Since August, Alfiatun has been setting aside 20 to 30 minutes towards the end of her weekly sermon to provide information on immunization. UNICEF and the district government reached out to her for support before the launch of BIAN – a nationwide immunization catch up campaign to address the major backslide in immunization after COVID-19.

As a health cadre and leader of Muslimat NU —the women’s chapter of the world largest Islamic organization, Nahdlatul Ulama (NU)—in Kalianget, she is well aware of the island’s low immunization coverage and feels compelled to preach about the issue.

Over the years, Madura has always recorded the lowest rate of childhood vaccination coverage in both East Java Province and Indonesia. From March 2005 to April 2006, East Java experienced a polio outbreak during which 45 of the 46 total cases were reported in Madura. Child immunization coverage fell further due to the COVID-19 pandemic and hit a low point during the Delta variant wave in 2021.

Sumenep is the only archipelago district in Madura and is made up of 125 islands scattered between 1 to 20 hours of travel by boat.  While the district’s geography has complicated vaccination efforts during BIAN, the biggest challenge lies in hoaxes spread across social media, which are easily circulated among aunties (housewives) during social gathering and leave many reluctant to immunize their children.

"In Madura, people were more frightened of the vaccine than COVID itself," reveals Nia Kurnia Fauzi, leader of the government’s Family Welfare Movement (PKK) and wife of the Sumenep Regent. "As a result, many people were reluctant to immunize their children as they were afraid it was the COVID-19 vaccine."

To address the situation, the district government began reaching out to aunties at community events where they normally spend time such as regular social gatherings and religious congregations.

"We chose to be closer with aunties because they are the ones who are close to their children," said Hendrix Prasetyo, Administrator of the Health Surveillance and Immunization Section. "While we learned that gossip – including hoaxes – can easily circulate through aunties, we now cooperate with them to fight against (hoaxes)."

Alfiatun is not operating alone – there are nearly five thousand aunties like her in Sumenep who are advocating for child vaccination during BIAN as part of the GRIDU (Integrated Immunization Massive Action) initiative.

"GRIDU was taken from our local language which means noisy and boisterous, reflecting our massive and integrated action," explains Nia. "Not only did we urge people in the puskesmas and posyandu to get their children immunized, but we also encouraged local leaders to advocate for immunization in their communities."

This collaborative action involves all parts of society – from government organizations like the PKK acting as the driving force for aunties, sub-district heads and village heads, – to the police and military who act as safeguards by strictly cracking down on hoax spreaders for the success of the programme.

Moreover, religious organizations such as the local Ulema Council (MUI), congregations of Aisyiyah Muhammadiyah as well as Fatayat and Muslimat NU from the district level to the village level are involved in promoting immunization, preventing hoaxes and encouraging aunties with children to vaccinate them.

As a result, Sumenep has now become one of the districts with the highest rates of immunization in East Java. As of the first week in October 2022, child vaccination coverage in Sumenep has reached 98.33 per cent, comprised of 55,090 children for vaccinated for measles and rubella, compared to 31.8 per cent in the previous year.

“This milestone has been achieved because of our strong cross-sectoral collaboration,” said Dewi Khalifah, the vice-regent of Sumenep, as she stood in front of the city’s grand mosque.

“We hope that our cadres, public figures and aunties with children will not only immunize their children but be a driving force for immunization in their communities in the future.” 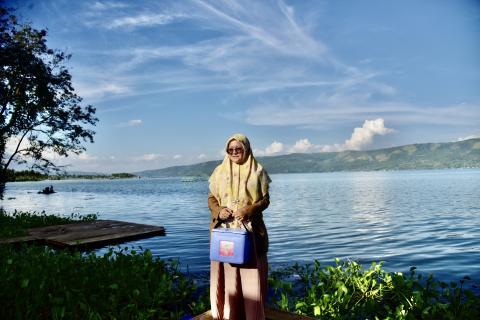 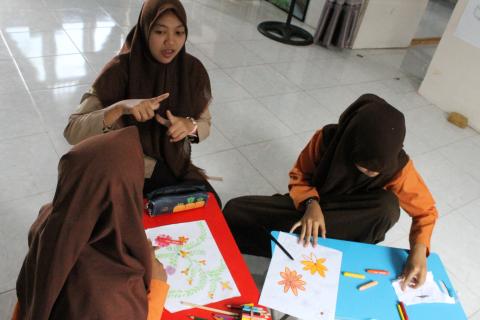 A deaf student speaks out for healthy environments 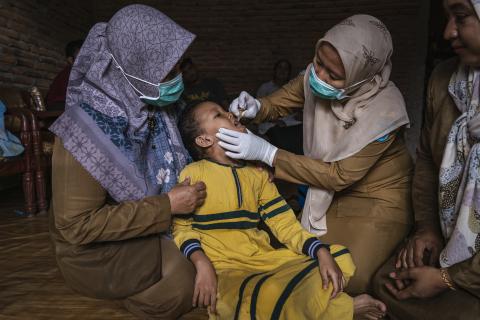 A Massive Movement to Prevent Polio in Aceh

UNICEF, WHO and Government Partners Team Up on Polio Immunization Campaign 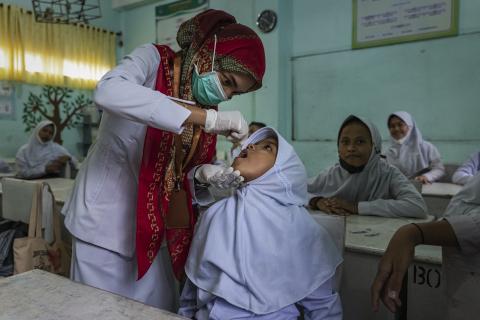