Students in Klaten are learning to deal with peer violence and bullying at its roots.

KLATEN, Indonesia – It’s a bright, sunny morning on the last day of term at State Junior Secondary School 3 in Klaten, and the schoolyard is full of children in uniforms, chatting and playing. Klaten is one of the poorest towns in the Indonesian island of Java. It suffers from being located halfway between the more prosperous cities of Solo and Yogyakarta. Most families in this area are rice farmers and are vulnerable to poverty due to bad harvests.

While most of the students are packing up to go home for the holidays, a group of 16 children stay behind in a classroom to present their anti-bullying work to visitors from UNICEF. After a motivational song, boys and girls share their drawings about bullying in the school. Hand drawn charts on the walls of the classroom show the results of a bullying survey conducted by the children in the school. Others document the emotional state of the children and visualise their ideas for how to prevent bullying.

A confident 15-year-old, Devi Tulak Astuti, reads out a poem ‘The Dagger of Hope’ that the group wrote together about bullying. “When my dream is in danger, I feel everybody is silent. Even the sky looks at me with pity,” she says in Bahasa. “But I will keep marching on, the dagger of hope in my hand. I am confident my dream is within reach.”

Devi was not always so outgoing. When she was 14, some of the boys in her class started teasing her. “They made fun of me because I have dark skin and called me bad names like ‘serundeng’ [dark brown fried beef],” she recalls. “This made me feel broken-hearted. It hurt my feelings so bad. I didn’t tell anyone about it. I felt like this is not normal, something is wrong.”

Not knowing how to deal with the situation, Deri tried to bully the boys back. “I called the boys girls’ names from videos on Tik Tok [Chinese social media app]. But it just made them mad, and they called me more names, so it actually made things worse.”

When the Roots anti-bullying programme came to the school, Devi realised there might be a better way to handle the situation. She volunteered straight away. “I joined because I had experienced bullying myself,” she says. “I wanted to help change the school so that other students are not bullied.”

The Roots anti-bullying programme, which is supported by UNICEF and Klaten district government, helps children like Deri find more positive ways to deal with bullying. It was piloted in four schools and now expanded to another two. Children like Devi are chosen by their peers to be ‘agents of change’. Together with teachers and facilitators from NGO Lembaga Perlindungan Anak [Child Protection Body], they try to change the school culture.

UNICEF Child Protection Officer Naning Julianingsih explains: “The underlying problem is that people in Indonesia don’t take bullying seriously. They see it as just a normal part of childhood and going to school. It’s socially acceptable. Sometimes teachers punish bullies, but they don’t address the reasons behind it. The Roots programme aims to change that.”

Roots facilitators go through a training designed by the government with support from UNICEF. First, the children assess the situation in the school, using U-Report, a mobile social media -based tool that enables anonymous opinion polls. In State Junior High School 3, they found that 74 percent of students had experienced bullying, on average 4-5 times a week. The types of bullying in the school ranged from hitting and pinching, to mocking, gossiping and cyberbullying.

Next, the facilitators learn how to work with children and teenagers and change negative behaviours to positive. They help the students develop their own campaign based on the issues identified in their school. This might involve making posters and develop an action plan to fight bullying in the school, including by being champions of positive behaviour themselves.

“We encourage facilitators to listen to the children, find out what the reason is for the bullying and discuss how to deal with it,” Naning continues. “Often when children bully, there is a problem at home. They copy behaviour they see from their parents or in their community. So we need to find out what is behind the bullying and try to address that.”

Wancik Ridwan Barari, 23, is one of the anti-bullying facilitators in Dewi’s school. He has always wanted to work with children. “I’ve been a youth activist since I was 14,” he says. At school I was leader of the Children’s Forum. Then I studied psychology at university. I wanted to stay involved with children, but in a different way.”

In 2018, Wancik attended the UNICEF training. “It gave me new skills,” he says. “I learned how to interact with teenagers. It’s different to children. I learnt how to set the mood, calm the class, listen to the students and find stories of bullying.”

Another Indonesian schoolgirl has taken her anti-bullying message to a global audience. Last year, Rizka Raisa Fatimah Ramli, 18, from Makassar won a worldwide School Superhero Comic Contest, organised by UNICEF. Working with a team of illustrators, she developed a new comic book to help children address violence and bullying in and around schools.

In the comic, which was launched at UNICEF headquarters in New York, Cipta brings her drawings to life in order to defeat invisible forces and restore peace in schools. It is now being printed and distributed in schools around the world, including Indonesia.

“Through drawing, I feel that my character is alive and I have control over bullies,” Rizka says. “I hope that Cipta will encourage children to be brave and stand up to their bullies. I hope I can inspire children to tell their stories. And if they can’t say it directly, to do so through drawing.”

In Deri’s school, the Roots programme is already creating a more positive environment for children to learn. Headmaster Purwanta, 49, has been at State Junior High School 3 for six months. He compares the school positively to his previous school, in the same town.

“The character of the students is different here, both in school and out,” Purwanta says. “In the villages, I used to find fighting every day between students. It’s totally different here. I haven’t seen a single fight here in six months. The students’ attitudes to each other and to the teachers is very different. They show respect and they love to make friends.”

Purwanta puts the differences down to the Roots programme, which he says has also improved grades. “This school has gone from number 18 of 65 schools in the district to number 11 since the programme started,” he adds. “When children are happier at school, they learn better.”

For Deri, the Roots programme has also taught her practical skills that she tries to put into practice. “I have learnt to reduce my intention to bully or to respond to bullying,” she says. “I learnt a trick. I close my eyes and say: ‘no bullying, no bullying’. If I see students bullying other children, I remind them not to do it. After three reminders, I go and tell a teacher.”

Deri agrees with her Headmaster that the culture of the school has changed. “I don’t see students fighting anymore,” she says. “The boys have stopped calling me bad names. Before, I had to go to school, but the environment was difficult. Now I’m very excited to come to school. I’m more confident, and I’m happy with who I am.” 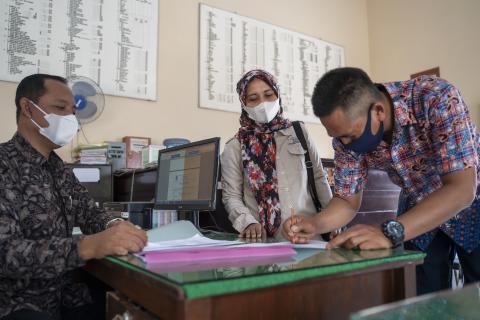 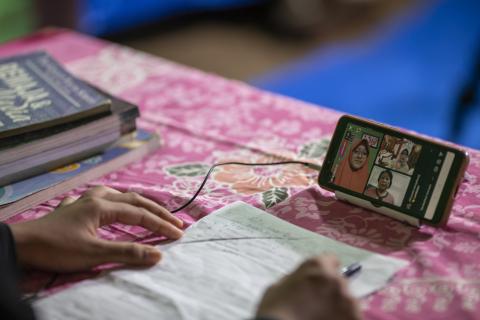 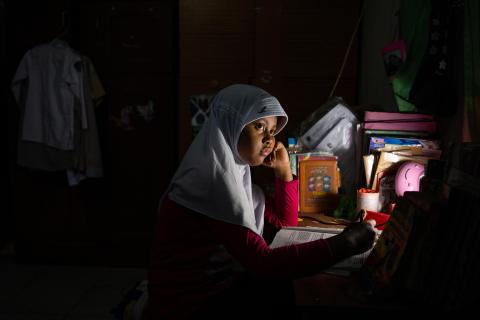 Surviving Double Loss in the Wake of COVID-19

Many children in Indonesia have to survive the double jeopardy of losing parents to work and the coronavirus. 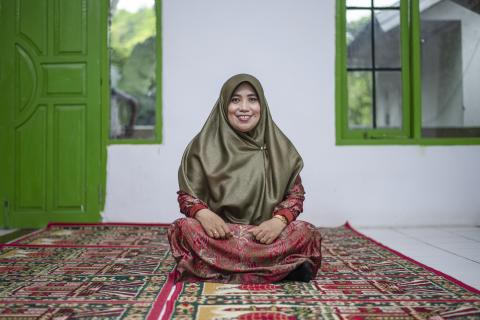 Ending Child Marriage, One Sermon at a Time

A female cleric stands up against child marriage in rural Indonesia.