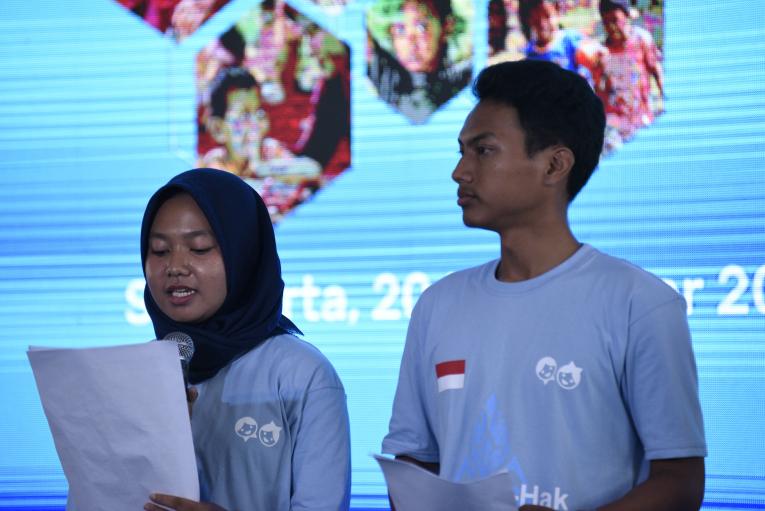 JAKARTA, 20 November 2019 – At an event marking World Children’s Day in the city of Surakarta today, children and young people called for greater child representation at all levels of policy and decision-making in the country. The 12-point children’s statement, which was read in front of a large audience, was crafted during a child summit organized by the Province of Central Java earlier this week, during which 150 children and young people from across the province discussed and debated the issues that most matter to them and their peers around the country.

In their statement, they expressed their hopes for a world where every child has a legal identity, there is no more child marriage, and corruption is eliminated so that all resources can be used for the fulfilment of child rights. Among their asks were for all children to enjoy safe and clean water, and protection for children with disabilities, those in contact with the law, victims of violence, conflicts and disasters. They also committed, on behalf of all children in Indonesia, to become more creative, innovative and global minded, and to be the solution for the future.

The child summit followed weeks of online consultations through UNICEF’s polling platform UReport, during which thousands of children and young people across the country were asked their opinions about their dreams, aspirations and hopes for the future.

This year’s World Children’s Day marks the 30th anniversary of the adoption of the United Nations Convention on the Rights of the Child, the most widely ratified human rights treaty in history.

“Let's realize the eternal vision of all human rights for all children: to end child poverty and increase children's survival; increase the number of children enrolled in schools; end social alienation for children and ensure equal access to essential services; to no longer keep children in silence and instead let them have meaningful participation in decisions that matter to them,” said KPPA Minister I Gusti Ayu Bintang Darmawati.

Since Indonesia ratified the Convention in 1990, the country has made significant progress in advancing children’s rights. The Juvenile Justice Law in 2012 and the Child Protection Law in 2014 have created a solid child protection framework. The creation of the Child Protection Commission and the National Human Rights Commission have helped translate legal commitments into action. More recently, the amendment of Indonesia’s Marriage Act raised the age that girls can be married from 16 to 19 years, placing Indonesia ahead of many countries in the region.

“I hope “child friendly” will not just become a regulation, nor a jargon to meet certain targets but it should be something concrete that children can really enjoy and benefit from,” Central Java Governor Ganjar Pranowo said. “If a child says I want to play in a nice environment, then the concrete form of child friendly is by providing a playground or a park, child friendly means no bullying should be tolerated and friendship should be encouraged. The easiest way is to ask the children directly and follow their leads,” he added.

Since the Convention was ratified, progress has been significant yet uneven, and challenges continue to affect childhood in Indonesia: the country is experiencing an alarming rise in overweight children while stunting levels remain stubbornly high; too many children face violence in and around school, including cyberbullying; and the challenges of safe sanitation and child marriage continue to threaten children’s health and futures.

“It has been 30 years since children became the centre of the world’s attention, a lot of progress has been achieved, for example now Indonesia has the Child Protection Law, but a lot still needs to be done,” said Mayor FX Hadi Rudyatmo. “Solo obviously is deeply committed to becoming an all-round child friendly city and we know we still have to work hard in many areas to achieve the goal.”

This year, around the globe, World Children’s Day is celebrated as a day of action for children, by children, where children have the space to make their voices heard.

“The Convention on the Rights of the Child was a milestone for children, acknowledging them not simply as passive recipients of care, but as individuals with their own rights that must be respected,” said UNICEF Representative Debora Comini. “In the face of emerging challenges, it is imperative that we recognize the right of children to participate in decision-making processes and involve them in co-creating solutions for a better future.”

UNICEF is marking World Children’s Day in Indonesia with the following activities, among others:

Published in connection with the 30th anniversary of the Convention, the The Convention on the Rights of the Child at a Crossroads report both celebrates the achievements of the past three decades and outlines a selected set of issues that need urgent attention based on the latest available data. It also advocates for all stakeholders to recommit to the Convention, stepping up their efforts to fulfil its promise in the next 30 years. 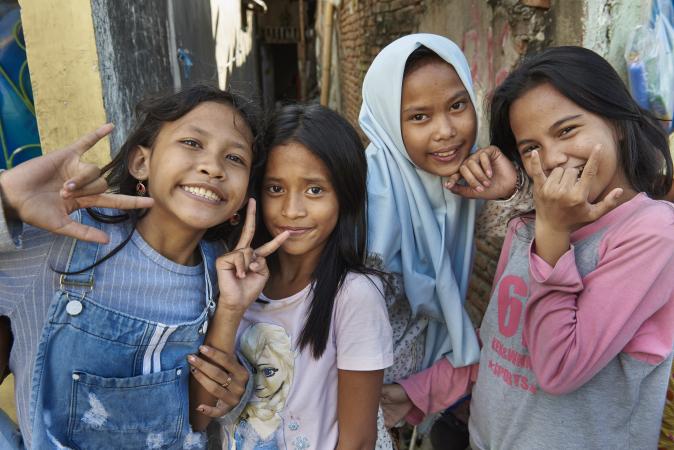 Standing outside their home, a group of young girls makes victory sign in an informal slum on government land by River Canal in Makassar, South Sulawesi. Indonesia.

You can learn more about World Children's Day in Indonesia on our website or download The Convention on the Rights of the Child at a Crossroads report here. 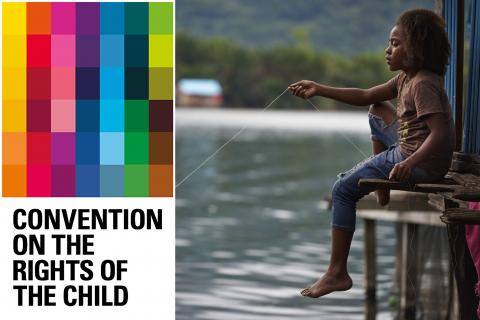 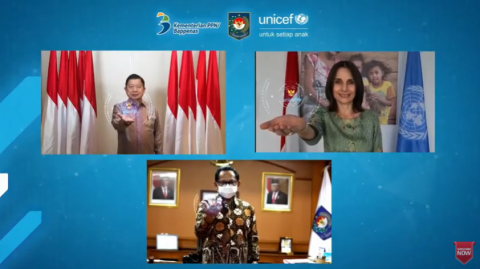 With the launch of program of cooperation 2021-2025, RI-UNICEF in synergy to accelerate the fulfillment of children's rights in Indonesia