The teacher’s house that became a school after the earthquake

The teacher's house is now a place where boys and girls can study, but it has also become a safe place to meet, play and receive psychosocial support.

The 14 August 2021 earthquake destroyed nearly 1,000 schools in the Great South, jeopardizing the education of children. Appropriate and original solutions had to be found to prevent children from losing school days. UNICEF is committed alongside the Haitian government to quickly build learning spaces for education to resume. In the commune of Port-Salut, a teacher made his house available as a temporary solution for the children to continue their education.

PORT SALUT (HAITI), 14 February 2022.- Despite six months having passed since a powerful 7.2 magnitude earthquake destroyed the only school in Saint Table, the children of the small coastal community of Port Salut, in southern Haiti, have not seen their education interrupted. Of course, the educational community has had to adapt to very exceptional circumstances: the private home of a teacher is now the school classroom.

“After the earthquake, the situation became very difficult and chaotic. We couldn't go back to school and that's why we are in a teacher's house”, explains Morise Jean Tales, one of the schoolteachers who appreciates his colleague's gesture, but is worried about the lack of space and materials to hold classes in what he understands as an emergency, provisional solution.  "If students have a proper space, the adequate material allows them to learn better, follow their lessons better, reinforce the knowledge they acquire,” he concluded.

The teacher's house is now a place where boys and girls can study, but it has also become a safe place to meet, play and receive psychosocial support after the trauma that many of them experienced after the earthquake. More than 2,200 people, including children, died in Haiti’s southern peninsula because of the earthquake and over a thousand educational centers and a hundred health centers were damaged or destroyed.

One of the main concerns after the earthquake was regarding the continuation of education in the affected areas and the lack of adequate spaces for learning. To date, more than 80 percent of students in southern Haiti are in school, but there are still those who have not been able to do so, and 250,000 boys and girls are at risk of never returning to school if access to education does not urgently recover.

Before the earthquake, Saint Table’s school had 120 boys and girls. Six months later, without adequate space, only 40 children are continuing their classes by going to the alternative classrooms located in the teacher's house, while the rest of them have not returned due to the lack of appropriate facilities.

“All over the world, no matter where you are, schools cannot exist without physical space to receive girls and boys. To receive an education, they need adequate spaces, including rooms that are in conditions that allow them to learn and develop, and the appropriate materials to reinforce the lessons”, explained Paul Alande, UNICEF Education Officer in Haiti.

Professor Morise Jean Tales will soon be able to relax, and a new school will soon open its doors to all the boys and girls of Saint Table. "It's not finished yet, it's still under development, but we thank UNICEF for giving us the opportunity to build a new school," says the teacher.

In the three most affected departments by the earthquake, Sud, Nippes, and Grand Anse, UNICEF is supporting the Ministry of Education in Haiti with the construction of new semi-permanent facilities with 228 classrooms, 76 bathrooms, and 38 administrative offices, which will serve grades from preschool to 6th grade, as well as supporting the rehabilitation of 900 classrooms in 150 schools.

UNICEF requested $97 million to meet the urgent needs of 950,000 people, including 520,000 children, affected by the earthquake six months ago by 2022. UNICEF's response to the earthquake remains underfunded with an overall shortfall of around 57 percent, including 55 percent underfunding for the education response and 79 percent for the water, hygiene, and sanitation sectors. 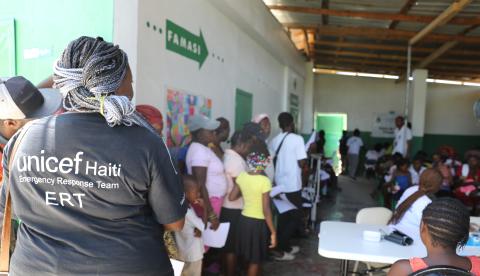 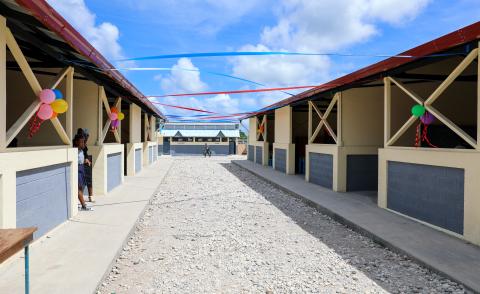 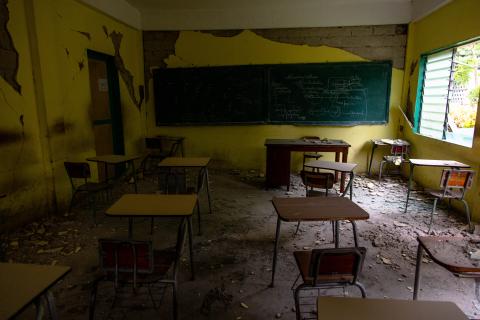 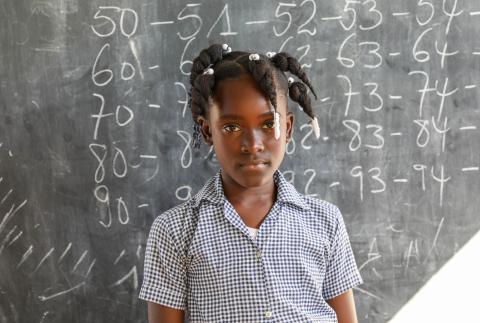