Xovesty Pepe (13) is normally a little shy, but today she cannot control her impatience. She waits anxiously for her teacher to finally stop talking to parents so they can get down to business: handing Xovesty her beautiful bike! Out of the 8 students in her class Xovesty passed the exam to continue to secondary school with the best results; and the bike is her reward. Her mother, Nisje Pepe, is beaming with pride. Sadly, there are more disappointed than proud faces. Xovesty is 1 of only 2 students who actually passed the exam to continue to secondary school. Two failed, and 4 students received a notice for the school to advise. This means the school is requested to advise the parents whether it would be wise to move on to secondary education or to repeat the 6th grade. Even more sadly, these results are not exceptional.

Suriname displays low primary school completion rates in general. In the school year 2008-2009, nationally only half of the children of primary completion age (12 years) were actually attending the last grade of primary education (grade six).  The results for the rural interior (the districts of Sipaliwini, Marowijne and Brokopondo) are way worse than the results in the coastal districts, with respectively 23%, 27% en 30% of students passing for their secondary school exam.  With 2 out of 8, Xovesty’s class scores just a little under their district average.UNICEF Suriname supports the Justice System with the implementation of Child Friendly Interrogation procedures.

Xovesty’ school is in the village Ricanaumofo in the district Marowijne. The small village is a Ndjyuka community, one of the 6 Maroon tribes inhabiting the interior. As the crow flies, the village is really close to the coastal main road that connects Nickerie in the West (border with Guyana) to Albina in the East (border with French Guyana). In reality however, after taking the turn from the main road it takes over half an hour of shaking on a bad clay road before you get there.
Xovesty was born in Paramaribo, but moved with her mother to Ricanaumofo when she was only two years old. Back then, the village did not have a school and was not accessible by road at all.

For Kindergarten, she went to the nearest city of Moengo with the school boat. She went to primary school there as well; until the 3th grade. By that time, the public primary school O.S. Ricanaumofo was opened. She did very well in school, except for the 2nd grade which she had to repeat. “I was out all day playing jump-rope”, Xovesty grins without any sign of remorse. Luckily her mother keeps a keen eye on her and her results!

“I am amazed at how quick the children picked it up! On the first day they were working with the laptops as if they have known computers all their lives."

O.S. Ricanaumofo takes part in a pilot project initiated by UNICEF, especially aimed at children in the interior.

Children in the interior have added disadvantages that make education statistics look so sad.  In many communities, pre-school is not available, causing children to enter the school system late.  Almost all children in the interior grow up speaking only their mother tongue. Being all of a sudden immersed in Dutch as the instruction language at school, is a second major hurdle. These facts, combined with by the lack of qualified teachers in the interior, result in high repetition rates in the first grade and poor net completion rates.

The wide age difference between pupils in a classroom affects the quality of education further. Teachers have difficulty addressing the age appropriate learning needs, and for children who repeat classes time and again, it gets harder and harder to have confidence, concentrate and learn.

The question asked was: How can technical innovations be used to enhance the quality of education and to diminish inequality? UNICEF embarked on a pilot project for Computer Aided Learning (CAL), doing 2 things at once: research and action. UNICEF Suriname supports the Justice System with the implementation of Child Friendly Interrogation procedures.

The action is provide schools with laptops with Math and Language supportive software; the research is to measure how this action  contributes to children’s and teachers' performance in Math and Language; and how satisfied children, teachers, parents and communities are about these results. To address the enormous disparities between the urban areas and the rural areas, a conscious choice was made to select the 5 pilot schools from the rural areas. The selection contains public (3) and denominational schools, serving children from Maroon (3) and Indigenous communities (2) .

Putting the interior first for a pilot project is taking on a challenge in Suriname. Projects in the interior involve lengthy and expensive travel deep down South, first by road, then by boat, and where necessary, by plane. Second, one cannot take anything for granted. Many schools in the interior do not have running water, nor electricity, leave alone internet. The research for CAL therefore started with a baseline study: not just looking at performance in and satisfaction about Math and Language; but also at the facilities of the school.

As so many other schools, O.S. Ricanaumofo relies on a generator to provide electricity. The generator runs on petrol and therefore is only operational in the hours when light is most needed: between 19.00 and 23.00 o’clock in the evening.  These are not school hours however. Since the software for the laptops requires internet, the project needed to invest in solar panels.

Another crucial factor to explore was the support of the community. The Head of School, Verginia Parijs, recalls how she and the Kapiten of Ricanaumofo were called to a big meeting together with traditional authorities of the other selected communities: “ UNICEF wanted to know their opinion on children of their village getting access to computers; and they wanted a commitment of the traditional authorities to help keep the laptops safe. All kapitens and basja’s were enthusiastic, our kapiten too.  The computers have arrived last May; we keep them locked in file cabinets, in a locked room.”

So far, the Head of School is enthusiastic too: “I am amazed at how quick the children picked it up! On the first day they were working with the laptops as if they have known computers all their lives. The program is only for grade 1 to 6; they all have their fixed computer day.  The under fives are even dejected and complaining: Why can’t we also work with the computers?”

The other teachers like it too, since it makes their work easier as well. Says the 4th grade teacher: “Sometimes you explain something to them and they literally don’t see it. But on the computer they explain it ánd they draw it; they explain you proportions, and then they show you a country that is twice as big as another one. With language it’s the same, they can practice verbs, searching the subject of a sentence. It allows you as a teacher to quickly see what they do not understand as yet, for example if they get a sentence and they have to fill in a word in singular or plural. And they really enjoy it, sometimes we do it as a reward; if you worked really well we are going to work with the computers, then all hell breaks loose!”

Xovesty totally agrees: “I like the computer! I had never seen one for real before, so the first time was really exciting. A white lady came and explained to us how to turn it on and stuff like that. We use it once a week, when we do arithmetic and language. But the best thing is the games. I already won a lot of Robbies!” Realizing the grownups do not understand her, she explains patiently: “Robby is a dog. If you work well, you get a Robby as a reward. And if you have gained a few Robbies, you can go play a game!”

Of course not all problems are solved at once. Sometimes Xovesty does not understand the foreign people ‘in the computer’ so well: “For me it is easier to listen to my teacher because I can understand her better. But luckily you can repeat it by clicking the microphone, and then they tell you again. And what they say is also written.”

What it does solve however, is the huge problem of children of different levels and ages in one classroom. Xovesty: “You can put on your earphones and then you can just work for yourself. That’s really nice because if you are finished with one assignment, you can just go on to a more difficult one.” She grins. “And that gives you more Robbies!” 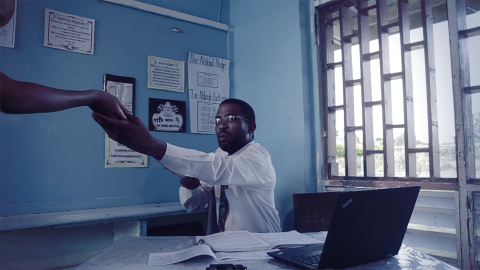 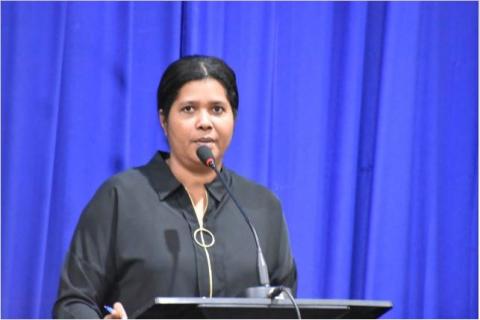