UNICEF works to ensure that all children in The Gambia are protected from violence, abuse, exploitation and neglect.

Children in The Gambia still face a high prevalence of violence, including corporal punishment, high rates of child marriage, female genital mutilation, and physical and sexual abuse, particularly against girls in schools, communities and the tourism sector.  Social norms and values, including a culture of silence, pose a big challenge to the consistency of child protection services and weakens the child protection system.

According to the 2018 Multi Indicator Cluster Survey (MICS), 50.6 per cent of girls between 0 to 14 years old, and 27.3 of girls between 0 and 4 years old have undergone female genital mutilation/ cutting (FGM/C).  Similarly, about one third (34.2 per cent) of women aged 20 to 49 years married before the age of 18 years.  A survey on physical and humiliating punishment of children in The Gambia, conducted by Child Protection Alliance in 2014, reveals that 38 per cent of children were beaten and 57 per cent were subjected to other forms of humiliating punishment. Bullying is an emerging issue as 42 per cent of the children reported being victims.

The Network Against Gender-based Violence, an organization that has been working on establishing One-Stop Centers in the country, recorded 941 cases of sexual violence between 2014 and 2018, 88 per cent of whom were children.

There is a growing trend of children on the move, with inadequate protection services to support them. The Gambia is one of the countries in West Africa that is both a transit and destination point for migrants. The country is also one of the worst affected by unsafe migration (including that of children) commonly called "back way". Rural-urban migration also continues to grow, with over 58 per cent of the population living in urban areas.

Birth registration still requires concerted efforts in The Gambia.  There has been an increase from 52.5 per cent to 57.9 per cent in the MICS 2018 from MICS 2010 for registered children, but only 32.3 per cent has actual birth certificates (MICS 2018).  It is important however to note that more than 78.9 per cent of mothers and caretakers know how to register their children.

Child protection in The Gambia continues to be dented by limited government funding in the area of child protection; a lack of technical and institutional capacity; limited coordination among child protection institutions; limited collection, analysis, management and use of data, weak implementation and enforcement of international and domestic legislation and policies; traditional and cultural beliefs and practices that support child abuse and non-participation of children.

In line with the National Child Protection Strategy 2016 -2021, our programme supports the Government of The Gambia and other partners to create and maintain an environment where all children receive comprehensive protection that contributes to the achievement of their full potential and participate in their protection from violence, abuse, neglect, and exploitation.

Our Child Protection Programme is aimed at strengthening the child protection system to provide efficient protection for all children against violence, exploitation and abuse.  It seeks to reinforce the social workforce and community structures, as well as children's participation as key pillars of interventions.  Our interventions focus on six main areas: 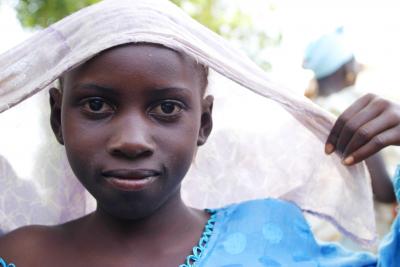 For the past few years, our child protection programme ran a very strong awareness-raising package that culminated in constructive dialogue on FGM/C at national and community levels.  These efforts led to a drastic decline in the support for FGM/C with 49 per cent of women denouncing the practice (MICS 2018). This is remarkable progress in a country where less than a decade ago, the prevalence of female genital mutilation in some regions was as high as 96 per cent (DHS 2013), and the topic of FGM/C was taboo in families and communities.  In recent years, our approach to ending FGM/C has evolved towards targeting young people with behavioural change strategies, including magnet theatre, steppingstones approach, engagement of young couples, the involvement of religious leaders, etc.  Our programme is also exploring the driving factors behind the social norms.  Also, and cognizant of the fact that FGM/C cannot be addressed as a stand-alone issue, we are also strengthening the child protection system at national and regional levels. Interventions directed at ending FGM/C also play a crucial role in reinforcing the child protection system.  Moreover, the programme is increasing synergy with other child rights-related issues, including education and social protection. 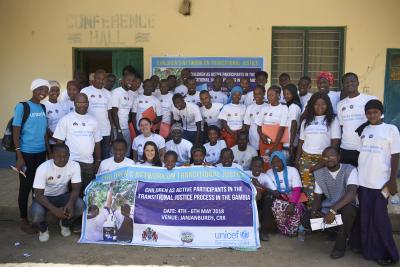 The Gambian child justice system comprises four children's courts that have jurisdiction over crimes committed by children. Each court is presided by a magistrate who is assisted by a specialized panel. The country has also established a Police Child Welfare Unit and a Child Unit in the Ministry of Justice.  In 2019, the National Legal Aid Agency provided support to 98 children in contact with the law.

Despite the progress made, there are still many gaps linked to a lack of capacity or resources and the absence of guidelines and an overarching policy framework.

Child rights are not fulfilled if children are no protected. To ensure that children in contact with the law receive appropriate services in line with their rights, UNICEF supports the training of law enforcement officials and magistrates, as well as improvements for children's courts in The Gambia. To reinforce the legal protection of children, UNICEF is supporting the National Legal Aid Agency to provide legal assistance for children in contact with the law. UNICEF has also been a key actor in the revision of legislation including the Children's Act, the Disability Act, the FGM/C law, and the Constitution of The Gambia to include current issues affecting children and reflect a more comprehensive legal standing for the fulfilment of children's rights in The Gambia. UNICEF also worked with other stakeholders to establish the Children's Network on Transitional Justice. 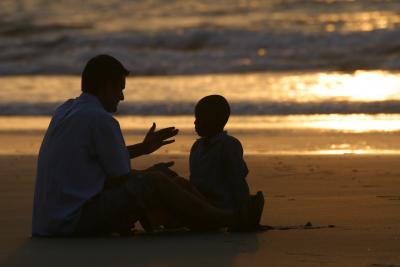 One central element in the child protection system is the setting up of a case management system that will facilitate identification, referral and care for children who are victims of all types of abuses.  The case management system is currently being scaled up throughout The Gambia and will make available evidence-based on qualitative and quantitative data, that will facilitate collaboration among stakeholders and support strategic programme interventions.

UNICEF is also supporting The Gambia Government in mainstreaming child protection into the education system through the setting of a Safe to Learn initiative.  This programme is addressing all types of violence in and around schools including corporal punishment, sexual violence and bullying.

UNICEF is also supporting The Gambia Government in developing a full plan of action to address sexual violence against children, which has been noted by MICS 2018 as the main concern for children in the country.  In the same line, and to improve on government prevention and response capacity, UNICEF The Gambia is working on a situation analysis of child protection in the country, as well as a normative study to provide evidence-based data on the underlying factors contributing or associated with the practice of harmful practices including FGM and child marriage. The programme is also supporting the government in the collection and analysis of routine data for all cases of violence against children. 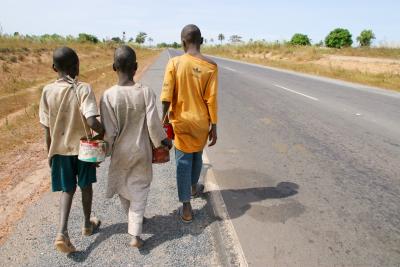 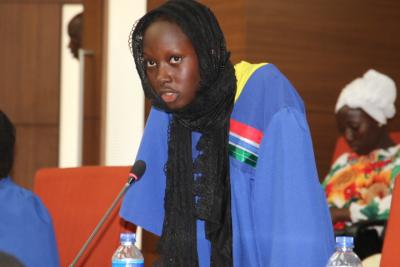 Children have a voice and their voice should be heard. We believe that all children have the potential and talent to participate in matters that affect them. In collaboration with The Gambia Government and civil society, our programme has supported the establishment of the Children's National Assembly of The Gambia, a platform for discussions, engagement, lobbying and advocacy with the government for the inclusion of children matters into national policies and programmes. The platform also presents an opportunity to teach children basic democratic values and principles, as a way of nurturing them for responsible leadership roles in the future. The children's parliament, with a membership of 105, was launched on 9 March 2019 and its first sitting held on the same day. 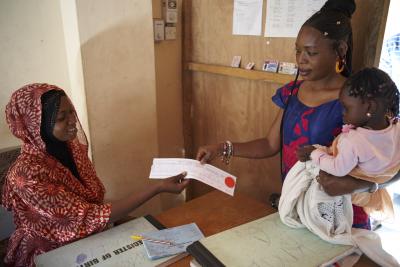 As the MICS 2018 revealed, 20 per cent of children whose births have been registered were not in possession of their certificates. Our birth registration programme is working with the government to organize the distribution of all birth certificates still in the system.

We are working on strengthening collaboration with the health sector to improve registration in the health centres and during routine immunization, as well as campaigns.