Ethiopia has just concluded a measles vaccination campaign which aimed to vaccinate 15 million children between the ages of 9-59 months.

Ethiopia has just concluded a measles vaccination campaign which aimed to vaccinate 15 million children between the ages of 9-59 months. With funding from the Irish Government, the US Centres for Disease Control, and the Government of Sweden, UNICEF supported the campaign by providing personal protective equipment and hand sanitizers to vaccinators and technical assistance to the government. Our UNICEF Tigray team led by the head of the field office Ghassan Madieh shares some of their experiences and insights during the campaign.

It’s Day Two of the measles campaign. We have just arrived at Tselemti Woreda, 100 kilometres from Shire Town. We meet with Hagos Kassa, the head of the Tselemeti Woreda Health Office outside his office while observing social distancing due to COVID-19.

“We started our preparations on 27 June by orienting directors and supervisors on the campaign, followed by an orientation of Health Extension Workers on 28 and 29 June,” he says.

“We have teams in 36 mobile fixed posts; each team consists of six members and they will target 25,000 children aged between 9 to 59 months in 25 kebeles, including children in the two refugee camps we have in this woreda - Adiharush and Mayani. Our target was arrived at based on an assessment done by the Women Development Army.

“So far, two days into the campaign, we have been able to reach 23 per cent of our target.

“We’ve had a total of eight confirmed cases of COVID-19 in this woreda out of which five have recovered.”

After the meeting with Hagos, we proceeded to Enbamadre Health Centre to where vaccination was taking place.

As a COVID-19 prevention measure, mothers and caregivers coming into the health centre are required to wash their hands at the gate before queuing up while standing at least a meter apart. When it’s their turn, they register the child’s details and are given a pink card bearing the child’s name. They are advised to keep the card in a safe place as there will be a house-to-house assessment after the campaign in which health extension workers will ask for the card to verify that all eligible children in the household have been vaccinated. At the end of the queue is a vaccinator who asks the children to offer their right upper arm. After the jab, the child and caregiver move to an area where they rest for a while. When all is completed, they wash their hands before leaving the centre.

“I think I should prevent both measles and COVID-19. Measles is also a deadly disease. I take all the necessary [COVID-19] precautions. I keep a distance of at least one meter from other people. I wear a face mask and I rub my hands with alcohol as frequently as I can for me and my children.”

Shishay Agetem (25), a graduate of Axum University, is a midwife and supervisor in the health extension programme in the woreda. He is coordinating the vaccination programme at Enbamadre Health Centre. He is in constant communication with his staff, checking on the progress of the vaccination and the availability of materials.

After initially shunning the health center because of fears of contracting the coronavirus, Shishay says he has seen a positive change in the number of people coming to the health centre for the vaccination and for other essential health services.

“In the past few months, we have seen an increase in the number of people visiting the health centre to receive a service. I presume this is because the community fully understands how COVID-19 is transmitted and how it can be prevented. They have overcome their fears.”

At the end of the day, Sister Zenemen holds meetings with her team to assess the day’s work.

“So far, we have seen some challenges. For example, yesterday there were some kebeles which reported underachievement. We tried to trace the problem and discovered that they were short on staff, so we recruited an additional four health workers.

“We have also identified challenges with personal protective equipment (PPE). We have a shortage of PPE, especially face masks, and we are also short on sanitizers since the vaccinators must sanitize their hands each time they vaccinate a child.

“In terms of logistics, we are short on gasoline, and that is necessary to transport vaccines and cards to distant areas. Cards were distributed based on the set targets but since we are vaccinating beyond the set target, we need replenishments.”

“We were worried that people wouldn’t bring their children for vaccination for fear of contracting the coronavirus.

“in the past, measles campaigns were held for three days, and each vaccination team had a maximum of three people. So, we were in a hurry to meet our targets. There was overcrowding. But because of COVID-19, this campaign will last for 10 days and each team consists of six people, thereby easing the burden on health workers.

“We prefer the current situation as people don’t crowd the vaccination area, thus helping us to administer the vaccine with ease and work in a more coordinated manner.” 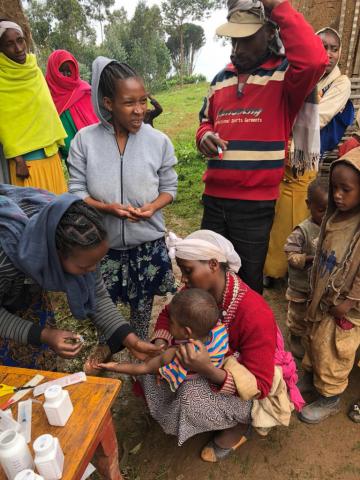 Ethiopia launches an integrated measles, vitamin A, and deworming campaign for displaced people in Gedeo Zone