On the International Day of the Girl Child (11th October), UNHCR, the UN Refugee Agency, together with UNICEF, the United Nations Children’s Fund, hosted a roundtable discussion to deliberate on how to support sustainable financing for countries in Eastern, Southern and Horn of Africa to overcome the barriers and challenges that prevent girls, including those who have been forcibly displaced, from completing their educational journeys.

With a focus on post-primary education, the event brought together humanitarian and development partners, private sector as well as refugee representatives to brainstorm and call for innovative financing solutions for girls’ education in Africa. The discussions also highlighted specific challenges for displaced girls to return to school, particularly considering the school closures during the COVID-19 pandemic.

“It has been extremely valuable to discuss ways of ensuring that displaced girls access their fundamental right to education,” said Clementine Nkweta-Salami, UNHCR’s Regional Bureau Director for the East and Horn of Africa and the Great Lakes region.

“I have had the privilege of speaking with displaced girls and young women across this region, including refugees, and what I have consistently heard from them is their aspirations for higher education. It is time for all of us to do our part to help them to achieve those aspirations,” said Nkweta-Salami.

I have consistently heard from [displaced girls and young women] is their aspirations for higher education. It is time for all of us to do our part to help them to achieve those aspirations.

One of the biggest barriers to girls’ education is the lack of financing for programmes that actively support their education journeys and opportunities for finishing basic education and accessing post-primary programmes.

22 year old university student and a refugee herself, Hanna Nyamal Yohanis, moderated the discussion. Thanks to a scholarship from the Mastercard Foundation, Yohanis is now pursuing a Bachelor’s degree in International Relations at the United States International University (USIU) Africa, in Kenya.

“Before we fled South Sudan in 2005, I saw how my parents prioritized my brothers’ education while the girls tended to household chores. I only got to set foot in a classroom at the age of nine, when arrived in the refugee camp in Kenya,” said Yohanis.

I only got to set foot in a classroom at the age of nine, when arrived in the refugee camp in Kenya.

“Even though I worked hard and completed my primary and secondary education, my family had no means to see me through university. If it wasn’t for this scholarship, I would probably be back home, out of school like the many girls in my community,” Hanna said, adding “I am glad to have this opportunity to ask the tough questions to international experts and call for more support to fund education on behalf of other young African women and give all of us a chance to change the world.”

According to UNICEF, approximately 25 million children in the Eastern and Southern Africa region have still not resumed school after closures due to COVID-19. Girls attendance is especially hard hit. This is in addition to the 37 million children that were already out of school before the pandemic. UNHCR also estimates that half of all refugee girls will not return to class when schools fully reopen. And for countries where their secondary school enrolment was already low, all girls are at risk of dropping out for good.

Evidence suggests that girls are often well represented in primary schools from grades 1 to 3, but their participation begins to drop off after that mostly due to constraints such as vulnerability to sexual harassment, menstruation and in some places, expectations of early marriage. As a result, millions of girls end up not continuing on to secondary school which ultimately negatively impacts their future potential as well as that of their communities.

“Together we must work hand in hand with our government, development and private sector partners to innovate and improve the financing of girls’ education, from pre-primary and all the way to finishing advanced levels,” said Mohamed Fall, UNICEF’s Regional Director for Eastern and Southern Africa, following the event. “This should be followed by offering girls professional opportunities so that they can transition from learning to earning.”

It is estimated that if all women had a secondary and higher education, the instance of child marriage and infant and maternal mortality would be significantly reduced, and preventable child disease and deaths would be halved. UNHCR and UNICEF remain committed to work with all partners to establish more affirmative actions to increase girls’ access to education, including achieving gender parity as well as bridging the technological gap in education.

The High Level Roundtable was organized by the UN Girls’ Education Initiative (UNGEI) regional working group, which is co-chaired by UNICEF and UNHCR and includes the Forum for African Women Educationalists (FAWE), UNESCO, Plan International, Save the Children, World Vision, International Rescue Committee (IRC) and ECHO.

UNHCR, UNICEF and UNGEI would like to thank the Global Partnership for Education, Education Cannot Wait, the Mastercard Foundation, Plan International, FCDO and the Zambia Ministry of Education for joining the Roundtable and contributing to the discussion. A recording of the event can be seen here. 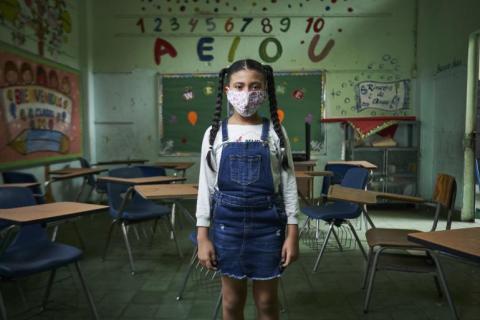