Two special events were conducted with the participation of more than 400 children; including the creation of an original song; and the most iconic landmark in Asmara was lit blue in celebration.

Ministry of Labour and Social Welfare/Eritrea/2019/Filimon

Asmara, Eritrea – The Ministry of Labour and Social Welfare (MoLSW) and UNICEF Eritrea joined hands to celebrate World Children’s Day  to commemorate the 30th anniversary of the UN Convention on the Rights of the Child (CRC) with two moving programmes in Asmara on 20th November.

The morning event featured a 47-member Asmara Children’s Choir that sang three songs, including an original composition titled Let Love Win, and a cover of We are the World; performances from the children’s Fiorina Group; and adorable acts by the tiny children from the Capuchini Kindergarten – which moved many to their feet, and some to tears.

The massive hall at the Expo Centre was a sea of blue t-shirts and blue caps to celebrate children’s rights with several ministers including for Labour & Social Welfare, Health, Justice, the Political Adviser to the President, and senior government officials, Ambassadors and diplomats, heads of UN agencies and more than 400 schoolchildren, including children with disabilities.

The main event was preceded by a photo exhibition of 28 selected images from the last 3 decades, including the iconic image of the signing of the UN CRC by H.E. President of Eritrea alongside UNICEF Executive Director, James P. Grant on 4 August 1994.

Additionally, a publication titled “Snapshots from a shared journey” was also produced for the occasion, which highlighted the joint progress for children’s development and rights in the last 28 years since UNICEF Eritrea was established.

“We have to create the necessary conditions and opportunities for children to be able to express themselves, and we should not give up and provide unrelenting support and guidance and correct their mistakes which they make due to age and peer influences,” said Mr. Mehreteab Fessehaie, Director General of the Ministry of Labour and Social Welfare.

UNICEF Eritrea/2019/Giri
The 47-member Asmara Children’s Choir stunned everyone during the WCD celebrations in Asmara.

Many of the attendees were moved to spontaneous applause by the energetic routines of the little children from the Capuchini Kindergarten. When the Asmara Children’s Choir took over, it became more somber, and almost everyone in the front rows pulled out their phones and began recording.

The multi-religious and multi-ethnic composition of the Asmara Children’s Choir, which includes children with disabilities, was another factor in its popularity. When the choir completed the planned three songs, including the title song and a cover of the 1985 hit We are the world, the Children’s Fiorina group took over.

“This is a good time, but we cannot rest on our laurels, for there are new and emerging goals on the horizon. When we look back, it is clear together we made a real difference for children. When we look to the future, it is clear there is more to do,” said UNICEF Representative, Ms. Shaheen Nilofer in closing remarks.

UNICEF Eritrea/2019/Giri
The Fiorina Children’s group perform in front of the Fiat Tagliero building which was lit blue for children’s rights on 20th November.

UNICEF Eritrea/2019/Nilofer
One of the most iconic landmarks in Asmara, the Fiat Tagliero building was lit blue to celebrate children’s rights on 20th November.

As the sun set over Asmara, curious onlookers stayed back to observe a crew complete a makeshift stage near the famous Fiat Tagliero building, and traffic police shut down one lane of traffic leading to the roundabout.

As the dusk eventually surrendered to the inky blackness of the night, shafts of blue light suddenly illuminated the iconic structure and passers-by pulled out their phones and began taking selfies. The makeshift stage came alive and members of the Fiorina Group, who had also performed earlier in the morning, now entertained the outdoor assembly with their singing and dancing.

A large crowd gathered to listen to the children singing and dancing and they stayed awestruck for an hour, while the music played.

Government officials and the diplomatic community, UN staff members and their families and the public, milled about and enjoyed the spectacle.

Finally, when the children completed their hour-long programme and began heading home with their parents, the wind picked up.

As the lane of traffic around the blue-lit building opened up, everyone turned homewards with a smile, because it had been a special day – for the children of Eritrea. 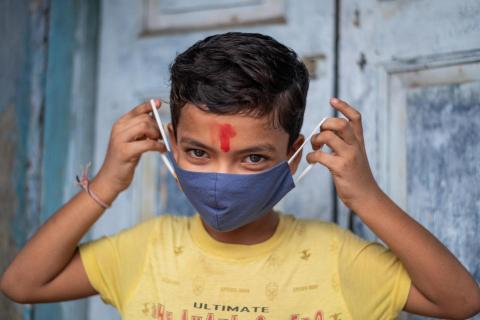 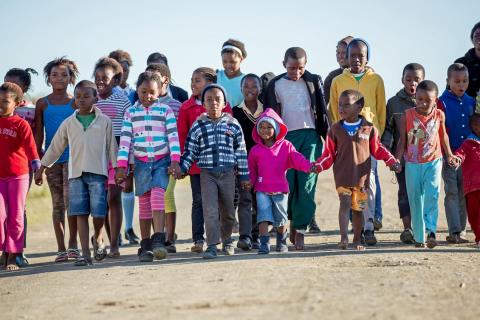 I have the right to know my rights!

All children have rights. It does not matter where you come from, what language you speak or if you are a boy or girl. 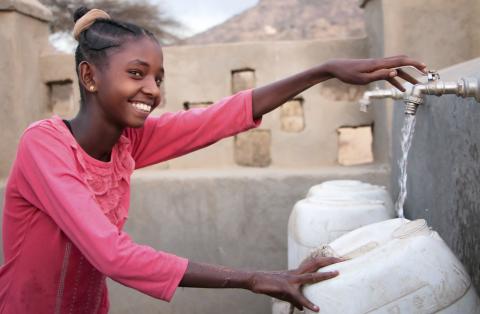 Eritrea commits to access to clean water, sanitation for all

At regional meeting for finance ministers 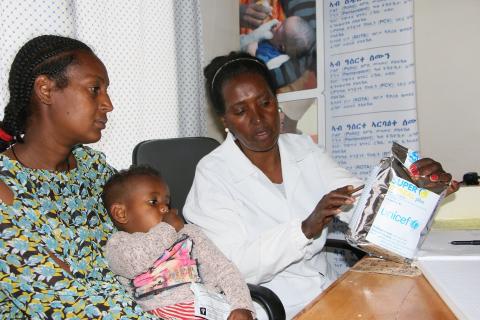